Aurora World is a point-and-click (WASD movement included) type MMORPG with some generic features as well as some unique features. Aurora World presents its players four classes: Warrior, Alchemist, Mage, and Witch; these classes are similar to most other MMORPGs with defined class roles. A tutorial is also provided with very detailed basics of almost every aspect of the game.

Aurora World’s character classes have very defined roles. The warrior is a melee, frontal assault, armored class. The alchemist is the healer and/or the support class. The mage are the heavy hitting ranged magic class who do the most damage. And lastly, the witch, whose ability is to disable monsters for allies or summon creatures to fight alongside as allies. The biggest disappointment I experienced was the lack of customization between the characters no matter what class a player chooses. Each selection only held about 3-5 choices. The noticeable differences were in the outfits a player wears once they chose their job. Obviously a healer would wear significantly different armor than a warrior. 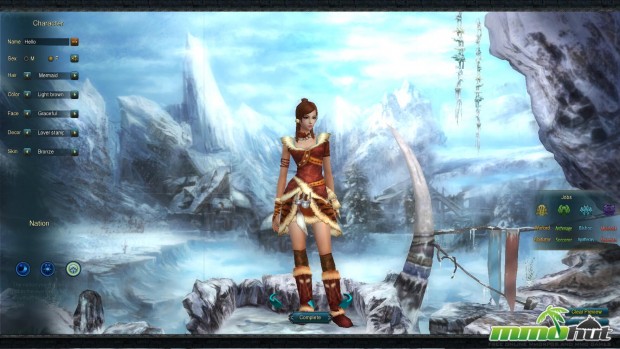 Character Customization in The Aurora World

While creating a character, a player may choose their nation. These nations represent a player’s starting point so if a player would like to play with a friend, they must choose the same starting points. Each nation also has its own unique environment which can be seen from the different types of clothing worn from selecting the different nations in the character customization. The three nations are Selene – the Moon nation, Helios – the Sun nation, and, Eos – the Star nation. These nations do not hold significance in the choice of classes; the only effect this has is the starting location of a player’s journey. The starting locations are set in very different environments. The Selene nation is set in a water-surrounded area, the Helios nation is set in a grassy-type environment, and the Eos nation is set in a very snow-driven environment. These environments hold no significance except for personal preference.

The questing system provided by Aurora World can be compared to any other MMORPG; the NPCs tell players to collect items, speak to another NPC, unlock a seal, etc, etc. There is not much of a difference in these quest lines except two things I would like to mention. There are certain quests that require a player to enter a disguise or carry certain items to another location. I found some humor in these quests because of how my character would become an entirely new entity. Often times, players also obtain skills once a transformation was done. The skills could be used as long as the player stayed in the transformed state.

In Aurora World, there are skills for combat and life skills which are for crafting and collecting. The skills used in combat can be obtained from the specified trainers for a player’s classes. These skills are pretty generic in terms of how most MMORPGs are and don’t hold very firm sense of being unique. Most of the magic skills require a casting time and some have cooldowns. The life skills are not used for combat; these skills are mainly for means to make items or money by trade. In the collect tab, there are certain categories that correspond with the categories in the craft tab(view image below). These skills are used together to make some equipments or potions that players can use in their journey. A level requirement of 40 is needed before any player can begin a life skill.

The Majinn are the pets and mounts of The Aurora World

Majinns are the pets and mounts of Aurora World. Majinns are also, in my opinion, one of the best parts of Aurora World. The majinns can be creatures, weapons, weird floating objects, and more; the first one a player will receive is around level 10 and I personally received a majinn named “Dragon Sword” which split into 3 different flying swords and fought with me. At level 20, a player may summon their majinn as a mount and ride on top of it. As a player progresses in levels, they will be able to find more majinn and they will obtain abilities for their majinn. Most, if not all, majinns are able to become mounts. These majinns can range from a dragon to saw-like blades. The mounting style may also vary; for example: players may ride on a dragon or players may mount blades on their backs and use them as propellers. View Flame3s’ video in the overview tab for more information and examples of these majinns. Aside from the majinns as mount transportation, there are also plane-life vehicles to bring players from certain places to other places. These planes have very strange wings that actually flap rather than glide or lift. Players see these vehicles in the prologue of Aurora World..

Overview
Graphics – 2/5 The graphics aren’t bad but for a point-and-click type MMORPG in 2013, my personal opinion is that the graphics need to be a step up to be on par with more modern-day MMORPGs.

Gameplay – 1.5/5 There’s nothing that separates this gameplay from other point-and-click type MMORPGs except for the majinns.

Community – 2/5 The players chat a little bit within the game but due to Aurora World just starting and the low population, communication is currently very low.

Customization – 1.5/5 As I have stated, there is very little customization.

Overall – 2/5 My personal opinion is that if the graphics were better and the gameplay was more interactive, the game would be great but because the entirety of Aurora World feels outdated, I’m not sure what more the company can do to bring the game to a more modern-day pace.