As reviewers, we have a habit of calling games ‘different.’ We’ve used the word so much it’s become meaningless. After all, different has no intrinsic positive or negative value, no quantifiable measurement – it’s a word we can use to quickly gloss over a game’s unique aspects. Yet when sitting down to write this review, the first words that came to mind were “Terra Battle is different.”

Of course it’s different. It’s Mistwalker’s first free-to-play mobile title, and for many mobile gamers, the first introduction to the development studio run by Final Fantasy creator Hironobu Sakaguchi. It’s a bit like Puzzles and Dragons and many other card-based mobile titles: you collect heroes, level them up, take them into battle, rinse and repeat as you get progressively stronger. Except, the battle system isn’t the same, the upgrade system isn’t the same, the gameplay isn’t the same; there’s far more differences here than Mistwalker’s artistic style. To really appreciate what ‘different’ means for Terra Battle, you have to dig deep, but I think you’ll be pleasantly surprised.

Terra Battle is, for once, not your average mobile game. 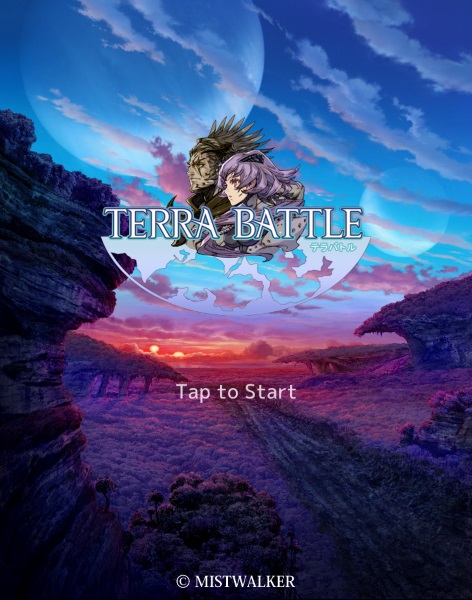 Terra Battle’s gameplay is separated into chapters and stages, each telling a small part of the overall game story. Each of these story segments isn’t particularly large: most are only a sentence to set the scene for the battle that will take place. The words are impactful, and sometimes chilling, but always too brief. This is, perhaps, Terra Battle’s greatest fault: despite the studio and presentation, the game’s story is incredibly thin. 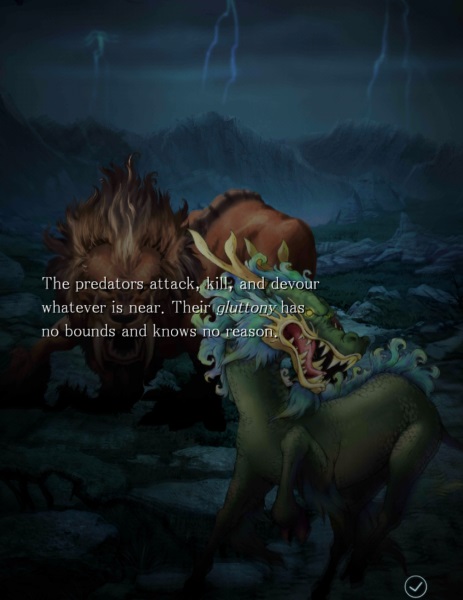 Thankfully, the game’s rich combat system is the complete opposite: robust and intense. Each stage offers a series of linked battles on a 48-square grid (six wide by eight tall). Your units will begin at the bottom of the grid, and one unit can be moved each turn to any available square on the grid. In order to attack, two of your units must flank (think “sandwich”) an enemy unit. Additional abilities can be enabled by having additional characters linked to the attacking units either horizontally or vertically (a line will be shown on screen when units are linked). 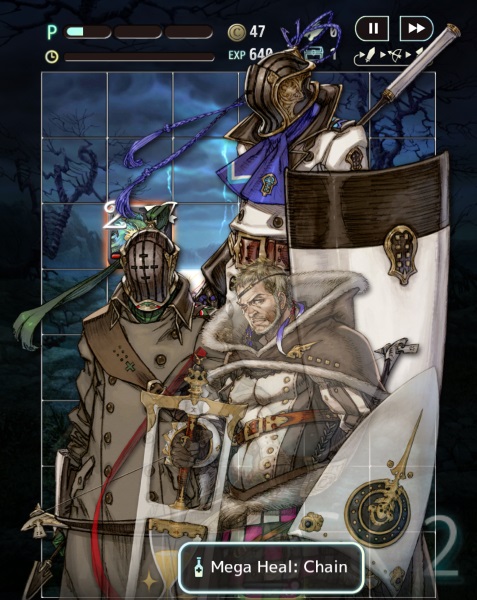 Combat uses a RPS format, where sword beats bow, bow beats spear, and spear beats sword. Magic is a fourth available unit type, and acts as a neutralizer, with weaker units that have more powerful and unique skills than the other three. Elemental affinities also play a part to add a secondary set of rock-paper-scissors combat to the existing weapon trinity. When one battle is complete, the next will begin, with new units appearing on the board while your units remain in their current position. All of that sounds simple enough, but that’s just the basics.

The Art of War

I’ll speak from experience: amateur strategy players will struggle with this title. The game’s difficulty ramps up quickly, especially in boss battles. The core difficulty that has to be overcome is the turn system. Each enemy unit will display a number at the top of its card, which represents how many turns until it will make a move. However, while you may always only pick up and manually move one unit per turn, each enemy unit that can act will take a turn simultaneously. This means that for every one move on your turn, your enemies may get half a dozen. 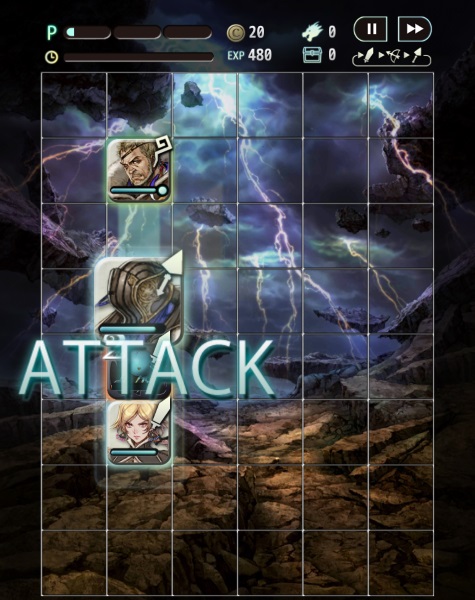 To combat this disadvantage, you are given the ability to bump your own units by crossing over them with your actively moved unit. The bumped unit will move in the direction you bumped it from; for example, an active unit moving right to left over another friendly unit will shift it one step left. Puzzle and Dragons veterans will be familiar with this mechanic, but it is far more necessary in Terra Battle in order to clear stages. Real mastery of the battle system means planning and quick fingers that will let you shift several pieces multiple times before placing the active unit in its final destination – because you’re also on a time limit. Thankfully, you have infinite time to plan before you start moving a unit on the battlefield. 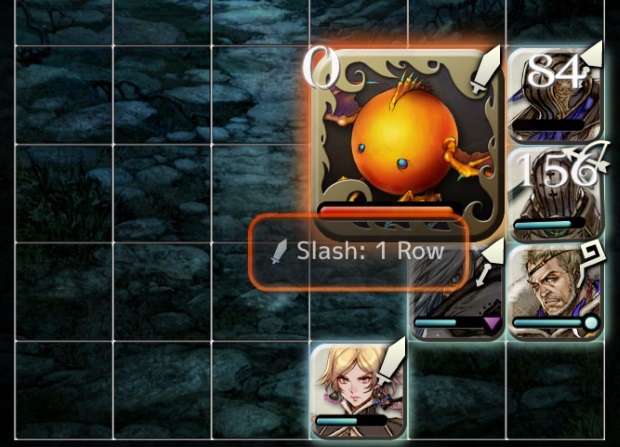 Just be warned. While you can only move your own units, some enemies (particularly bosses, which take up more space on the battlefield) can bump, push, toss, and scatter your characters around on the battlefield. Like I said, battles aren’t for amateurs.

Goodbye, Fusion. We Won’t Miss You.

There are two horrible mechanics in mobile games that should be taken out back and shot. The first is the limited energy system, which you unfortunately won’t escape in Terra Battle. The second, a fusion system, is blissfully missing. For those unfamiliar, the fusion system requires you to sacrifice cards in order to level up units, often with such a steep experience curve that you may spend weeks grinding to max out a single unit. 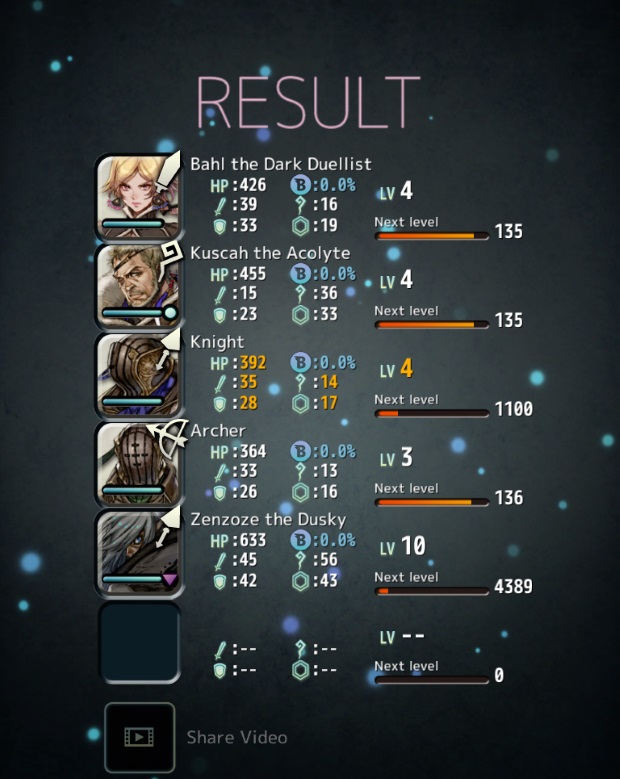 But Terra Battle’s characters progress more akin to a standard RPG. Characters gain experience in battle, based on their actions and successful combos. This experience will allow the character to gain levels, thereby also earning stat increases and new abilities. Some characters also have multiple jobs, another familiar RPG system. These jobs can be gained by paying items and gold, both of which are earned at the end of a battle. Jobs offer characters new art, skills, and better stats. The key takeaway, here, is that while grinding will certainly be necessary, it isn’t necessary at the rate of ridiculousness that the fusion system requires. Plus you at least get the satisfaction that your cards earned their power, rather than just having a card sitting on the sidelines getting fat off the rest of your deck’s hard work. 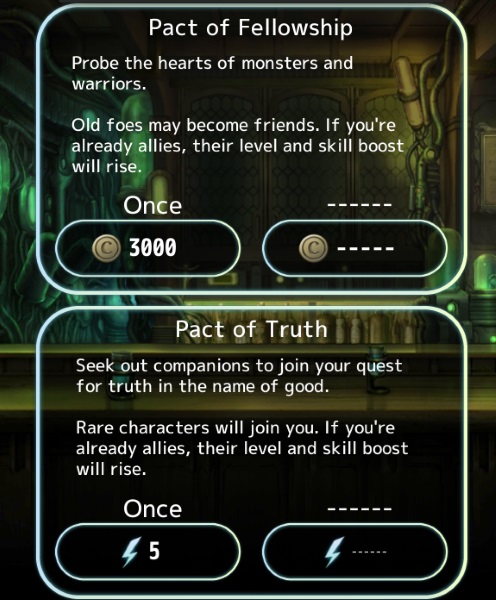 Hero characters are divided into different rarities, from SS down through B. The game will give you two characters on the draw right away, and most serious players recommend redrawing and restarting your game to get at least one rare character to start. You can recruit heroes through the tavern at any point in the game, using either coin or energy (the cash shop currency) to test your luck and see who joins you. Though typically you either need to throw down some cash or wait for events to accumulate bonus energy as coin recruited units don’t bring much to the table. This is thankfully a common occurrence as energy flows into your account on the regular. Enemies can also drop on the battlefield, but are usually ranked much lower.

All of these units can then be combined into squads, a set group of six characters of your choice. While you can only bring one squad into a stage, you can create multiple squads and choose between them at the start of the stage to adapt to the enemies you’ll face.

The Hunt For More

Terra Battle is a fresh game at the time of this review, not quite a month old. Despite over one million downloads, Terra Battle’s own story is just beginning. Outside of standard chapters and scenes, there are only two other areas to explore – the Hunting Zone (which allows you to farm for items or gold, but not experience) and the Metal Zone (a high experience area with no drops). Both of these zones become available at different times and days, but give solid alternatives to the story mode for building characters, as well as burning your stamina out in a hurry when you have less time to play and want maximum returns. 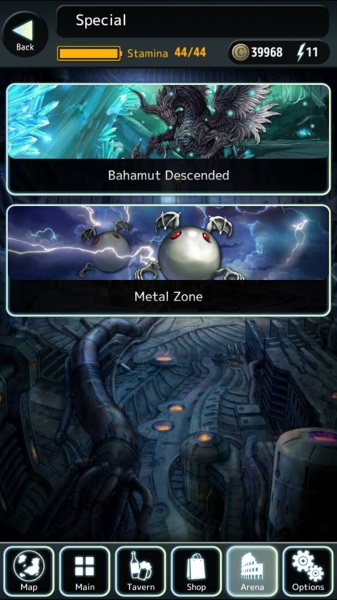 However, Terra Battle is also working on multiplayer battle modes, both co-op and versus. These are both “stretch goals” that have been unlocked through a special event based on the number of downloads the game has received. At the end of this event (ongoing at the time of this review) lies a console version of Terra Battle. What the future holds for these modes and bonuses, we can only currently speculate – but we’d guess that you can expect the same remarkable excellence that the game already has provided. 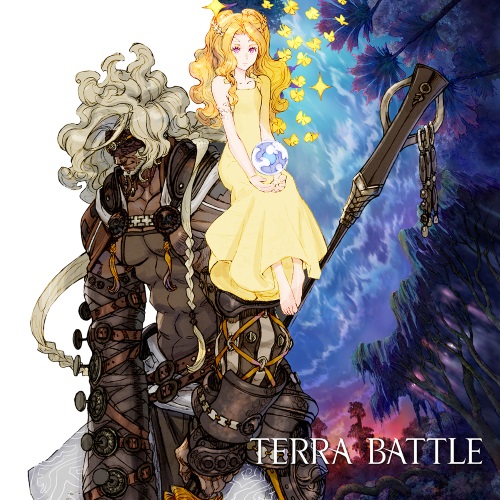 Yes, Terra Battle is doing something different. Although it hasn’t colored outside all of the lines of mobile gaming, it’s certainly making a step in the right direction, combining quality production with a deeply strategic gameplay. The cash shop, too, is fair: it offers the chance to replenish your stamina if you can’t wait for more, lets you continue a battle if you wipe, and lets you recruit rarer heroes in the tavern. It is too early to say how that last purchase will affect game balancing, as multiplayer modes are not yet implemented, but I suspect that with the amount of free cash shop currency the game throws at you, it won’t be an issue.

The ultimate point is, if you love strategy and haven’t downloaded Terra Battle yet, you’re making a mistake. Beautiful art, resonating music, skill-based gameplay, and less punishing progression mechanics make this new title one of the most exciting downloads on mobile in a long time.