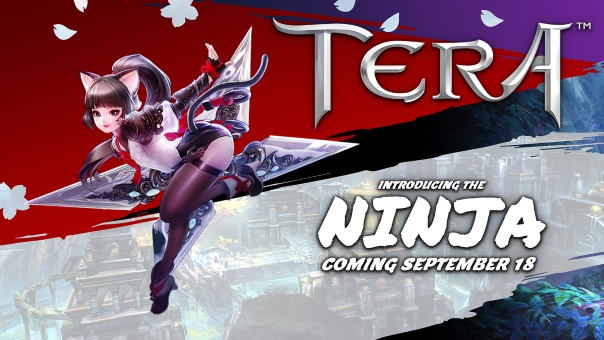 En Masse Entertainment has announced that TERA on PlayStation 4 and Xbox One will receive the new character class, the Ninja, on September 18.

A nimble strategist who relies on guerilla tactics and misdirection to confuse and decimate her foes, the ninja is a swift, silent, and shuriken-wielding character who brings deadly force to the fray. This unseen threat uses hit-and-run tactics, evasive maneuvers, and the ability to channel her Chi into blazing fire, to incinerate her enemies.

This update is part of the roadmap planned for 2018 for TERA on console, which will also include new dungeons before the year is up.

We got hands-on with Ninja on console while we were at PAX West 2018! If you’ve never played the ninja on PC, and you love highly mobile damage dealers, the ninja will be perfect for you. The class is unique in that it not only has several mobility skills, like Shadow Jump and Decoy Jutsu, but can also dodge twice, making them masters of hit-and-run tactics. With some powerful ranged finisher attacks, like Burning Heart, the ninja can use the moments they’re out of melee to deal even more damage.

On top of that, the controls on TERA for console are far more adapted to the Ninja’s fast-paced action. It was my first time playing the class at the PAX West demo, but it took me no time at all to find my rhythm, dancing in and out of danger while our group’s lancer kept up the threat. Any time I rolled away and had Chi, the ninja’s resource, available to burn, I spammed Burning Heart to burst a ton of damage on our enemy before rolling back in with my shuriken, slicing and spinning away. If someone fresh off the floor can pick up the Ninja basics, you can be assured that a masterful player can make use of her skills in PvE and PvP!