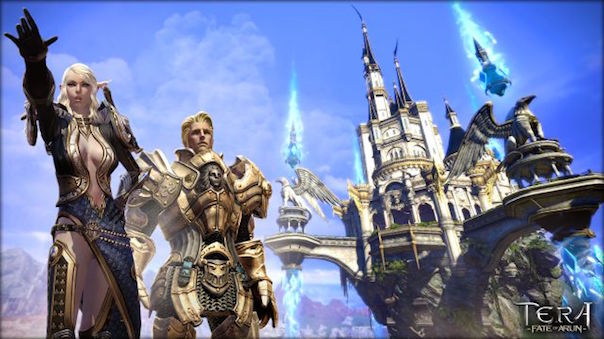 En Masse Entertainment, a player-driven publisher focused on delivering great games and exceptional service, today released a major update to its award-winning PC action MMO, Fate of Arun. Following the launch of the Fate of Arun expansion last December, this update provides players with a variety of new content including new 5-player dungeons, a 5v5 PvP arena, and guild activities and rewards. Since its launch, TERA has amassed over 17 million registered users around the world, built a strong community of fans, and continues to see praise from both players and media.

Today’s update brings guild housing to TERA in the form of floating “Skycastles,” customizable abodes hovering over two of the games major cities. Guilds compete for ownership of these prestigious symbols in the new “Crusade” system, which pits guilds against each other in leagues for both PvP and PvE content. The top 10 guilds in each league earn one of these impressive palaces for the duration of the next Crusade, which lasts four weeks.

“MMO’s are about community and finding friends to play with, and with this update there’s never been a better time to join or return to a guild, reconnect with old friends, and make new ones,” said En Masse Entertainment Producer Patrick “Treeshark” Sun. “We can’t wait to let our fans get their hands on Skycastles and watch them customize their own unique spaces within the world of TERA.”

Players can also battle through new dungeons instances included in the update; Sky Cruiser Endeavor, where they take to the skies to recapture the Valkyon Federation’s most advanced airship from enemies that have turned it against them, and an updated hard mode of the popular underwater dungeon, Bathysmal Rise. Additionally, players looking to test their mettle against each other can participate in the Champions’ Skyring, an updated 5v5 arena that provides the ultimate test of PvP skill.