News >
Preview Articles >
Taking a Spin On The Cycle (Preview)

Taking a Spin On The Cycle (Preview) 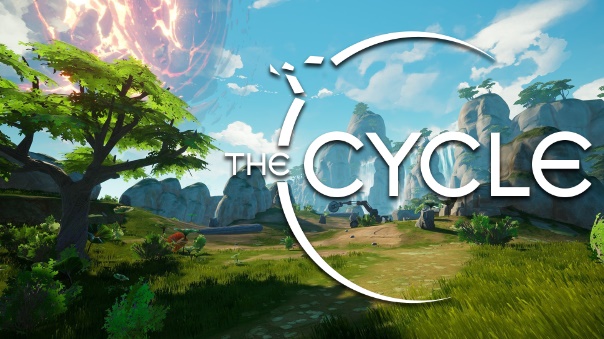 There’s generally two ways to make it big in the gaming industry. You either do something first, or you do something better than anyone else. World of Warcraft obviously wasn’t the first MMORPG, but they arguably did it better than anyone else for a long time. Dead by Daylight wasn’t the first asymmetric horror type game, but they’ve been quite successful with their title. And The Cycle, from Berlin, Germany based gaming studio Yager Development isn’t the very first “PvPvE” title we’ve seen (other titles include Hunt: Showdown, Sea of Thieves, Rend, and Crowfall).

There’s a fair bit more about The Cycle however that I think makes it a game that people are going to want to watch. The Cycle takes place on Fortuna III, a planet wracked by fierce storms. The native creatures to the planet have adapted to the storms, but the Prospectors, aka the players, have not.

Like Hunt: Showdown, The Cycle is run in rounds. Unlike Hunt, where the round’s length is determined by how long it takes to kill (or have all players be killed by) the big bad, rounds in The Cycle are a set twenty minutes. Within that time your objective is to fulfill as many contracts as you can, before the storm becomes overwhelming. Contracts can be a wide variety of goals and objectives: harvesting gas or minerals, taking samples from rare creatures, recovering data cores from drones, powering stations, or whatever. 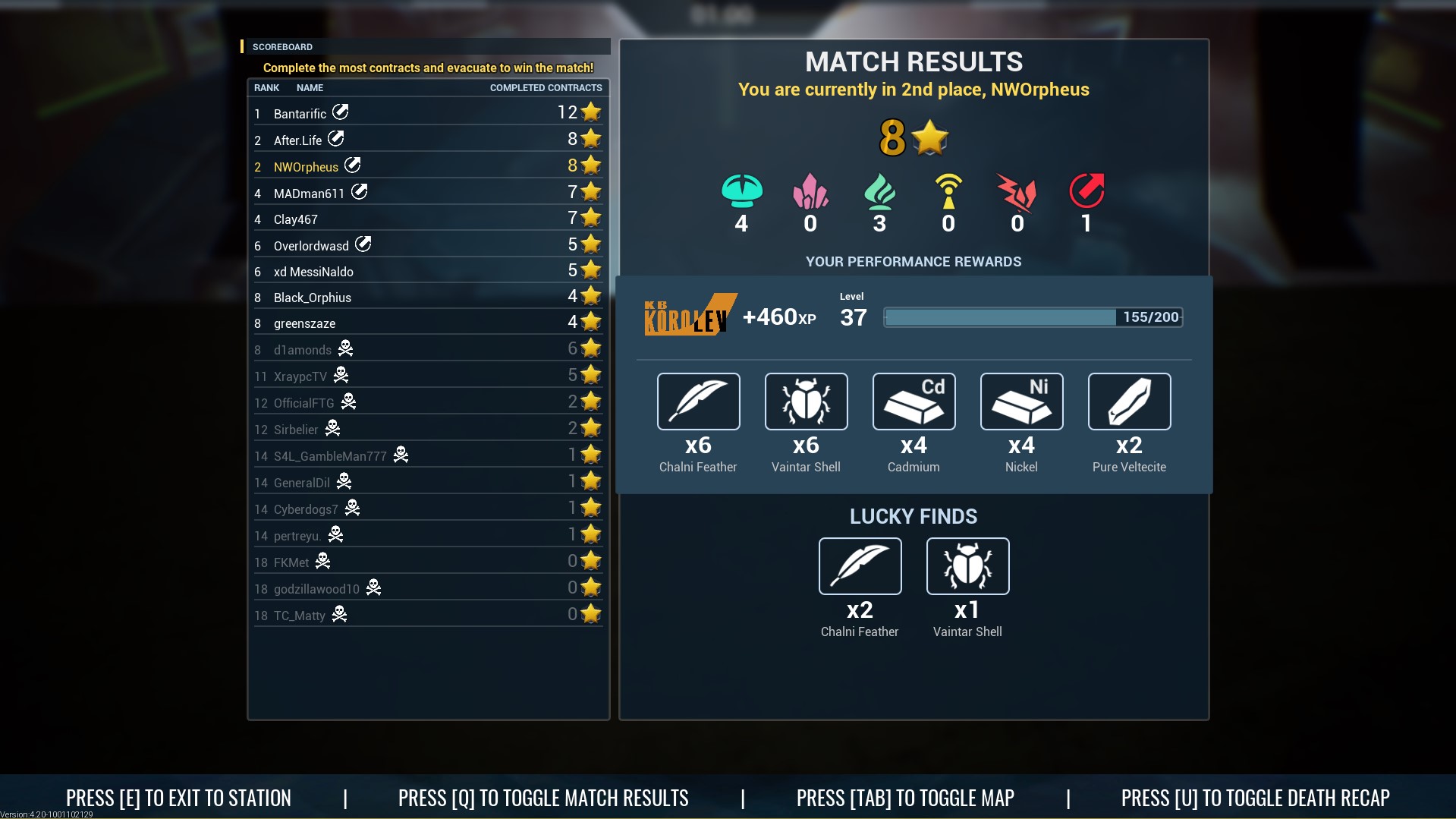 Here you see the various objectives completed by yourself, in solo mode, or your team, in squads.

Now, there’s no BR-like mechanic here, where the storm causes an ever shrinking circle to close in. Just the timer counting down until the radiation from the storm begins to wear your body down, causing such side effects as fatigue, death, and dry mouth. This is what makes the resources, and those who gather them, so valuable. There also is no established governance, as such, though there are three factions which are particularly interested in Fortuna III. In fact, you’ll choose which of these factions you’re representing when you land on the planet, and each of them has different NPCs that offer quips throughout the match.

All in all, this leaves for a very “American Wild West” type situation, but in space. Guns are the law of the land, and the final arbiter of disputes about what resources belong to whom. Each round, twenty prospectors are dropped to the planet’s surface. Currently they are either dropped solo, or in squads of four. According to The Cycle’s developers, “duos are a no brainer” in regards to additional mode types, but currently they’re more focused on features and getting closer to leaving alpha and entering a closed beta state.

The very first time you launch the game, a brief but very effective and informative tutorial is available. Not only can you return to that tutorial at any time, but there’s also a sandbox mode where you can access any of the game’s many, many, customizable weapons. I think it’s somewhere in the realm of 30 different weapons divided amongst assault rifles, sniper rifles, shotguns, SMGs, rocket launchers, grenade launchers, and special weapons.

The tutorial is short but solid, and the sandbox mode is a perfect compliment, allowing you to do experiment with guns and objectives.

The sandbox mode also has various creatures you can fight, as well as the different objectives you’ll find in missions, allowing you to gain an understanding of them before you get into a match. Finally, the sandbox has a place where you can pick up credits, so you can test a particular loadout.

Loadouts are a big part of The Cycle. These consist of a variety of factors: your kit, primary weapons, secondary weapon, gadgets, and abilities. Now, in order to use these various components you have to craft them from blueprints. Blueprints, in turn, require that they be unlocked by leveling up your standing with the various factions: Korelev Heavy Industries, Osiris Corporation, or the Independent Civilian Advisory. Each faction not only has their own NPC, but also their own flavor associated with their weaponry, similar to the Borderlands franchise, or Defiance. 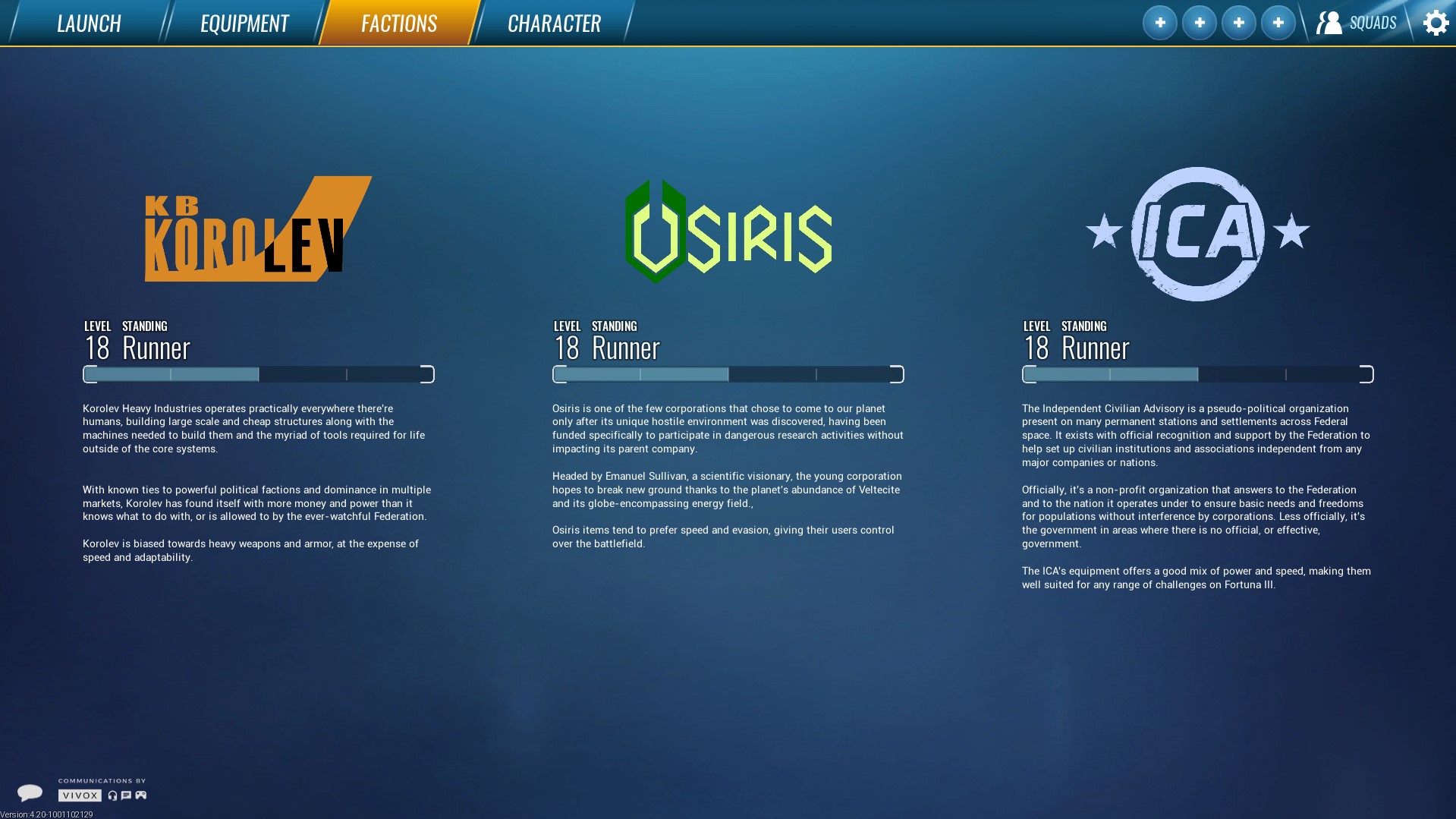 You’ll have to level up each faction level separately, by choosing one to support before each match.

Once you’ve unlocked a blueprint, you still need to harvest the materials in order to craft them. The materials are gained through completing trips to Fortuna III. Scoring higher will garner you more materials. Once an item has been crafted, though, it’s yours for good, unless you scrap it, which will return some portion of the resources. You don’t automatically start each round with the full loadout though. Only your kit and secondary weapon (pistol) come with you to the planet. The rest you have to earn credits to purchase from the store in game.

The amount of customization that weapons are capable of receiving is fairly extensive, and will allow for a good deal of play styles. You can add scopes to weapons of various types, but these will have effects such as increasing the time to equip the item, or bring it to aim. Other mods will reduce or increase reload time, in exchange for an increase in magazine capacity or reduction in recoil. One of my favorites is adding explosive ammo to the Korelev Hammer, a revolver type pistol that packs a nice punch.

So, the average round works something like this: You’re dropped on the planet, and begin trying to amass credits, which is done by killing native creatures. Some of them you get a direct cash infusion from, and some will also drop bits of valuable… bits. You can also find cash scattered around various human placed outposts, and in loot crates. These are very nice, as you can find not only cash, but weapons and gadgets. Definitely be on the lookout for these bad boys!

As you’re acquiring money, you’ll also want to begin accomplishing some of the easier objectives, such as placing gas refiners and mineral extractors. Gas refiners will actually automatically accumulate points for you, but if left unguarded can be taken over by another prospector. Mineral node drills can be attacked by creatures or other players, and must be harvested. Each objective plays out a little differently. Also, each time you complete a contract’s objectives, the contract is renewed, but a bit more difficult than before, requiring you to acquire more of whatever the resource is.

As the game progresses, you’ll likely want to try to focus on higher risk, higher reward objectives. These include zeal gems, uplink relays, storm crystals, and rare creature hunts. All the while watching your back, because if you run into another prospector, they might just decide that it’s best to eliminate the competition. Of course, you can team up with them for a temporary alliance, but this has risks too. After all, alliances were made to be broken, and your friend may decide offing you is worth the increase in rank at the end of the match.

The Cycle has, so far, a very solid community, with an active Discord and very responsive and interactive developers. I hadn’t really heard of the game before GDC 2019, to be honest, but I’m glad that it showed up on the EPIC game store shortly after. It is going to be exclusive on the EGS launcher until at least Q1 of 2020, but they have hopes after that of expanding not just beyond the EGS launcher, but also to consoles. As they’re still pretty early in development, however, they’re really just focusing on getting the game completed for now, and EPIC’s exclusivity deal with them included the use of a number of tools that otherwise would have been quite expensive, and have helped propel their development along. They do intend for the game to be free to play, as well.

If you’re interested in signing up for future alpha events, which will also get you unfettered access to the closed beta, and a special alpha participant exclusive cosmetic, as well as helping mold the future of the game, make sure to visit The Cycle’’s website, and sign up. I’ll be very surprised if this game doesn’t show up before long on the e-sports circuit. I think there’s some improvements the game needs, like ranked matchmaking, but there’s plenty of time for that before the game goes gold. For an alpha title, it’s in an amazing place, and is a ton of fun. I see nothing but potential here.