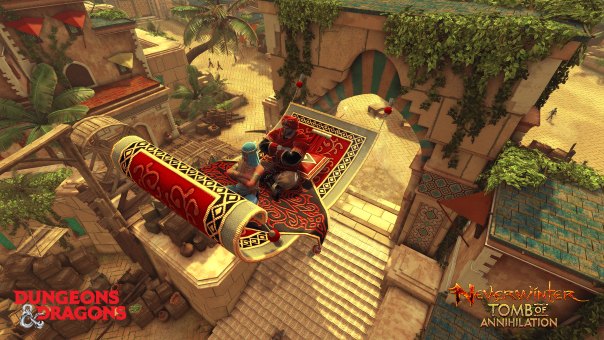 The latest Neverwinter update, “Swords of Chult” is available today for both the Xbox One and Playstation 4 consoles. This update to the free-to-play MMORPG set in the Forgotten Realms brings a dynamic, endgame Skirmish to Port Nyanzaru, as well as PvP, inventory management and refinement system adjustments for all players. Deeper into the Tomb of Annihilation’s content, a host of new threats are coming to Port Nyanzaru; dinosaurs, undead, and servants of Aceterak await in “The Merchant Prince’s Folly” skirmish, which changes every time it’s played. In this update, the Tenacity stat has been replaced, PvP items now scale even more with the activity, plus armor penetration has been changed further and control effects now have diminishing returns. Swords of Chult also introduces a new set of PvP gear, a permanent Solo PvP Queue and more. Inventory management was fixed, with new sorting options being added to the UI. The Refinement System was also streamlined and updated, allowing bulk conversion and manage them incrementally as before. The final major change is that players with multiple characters now have the option to create a Signet of Patronage for several endgame campaigns. These may be applied to alt characters to progress through supported campaigns much faster.