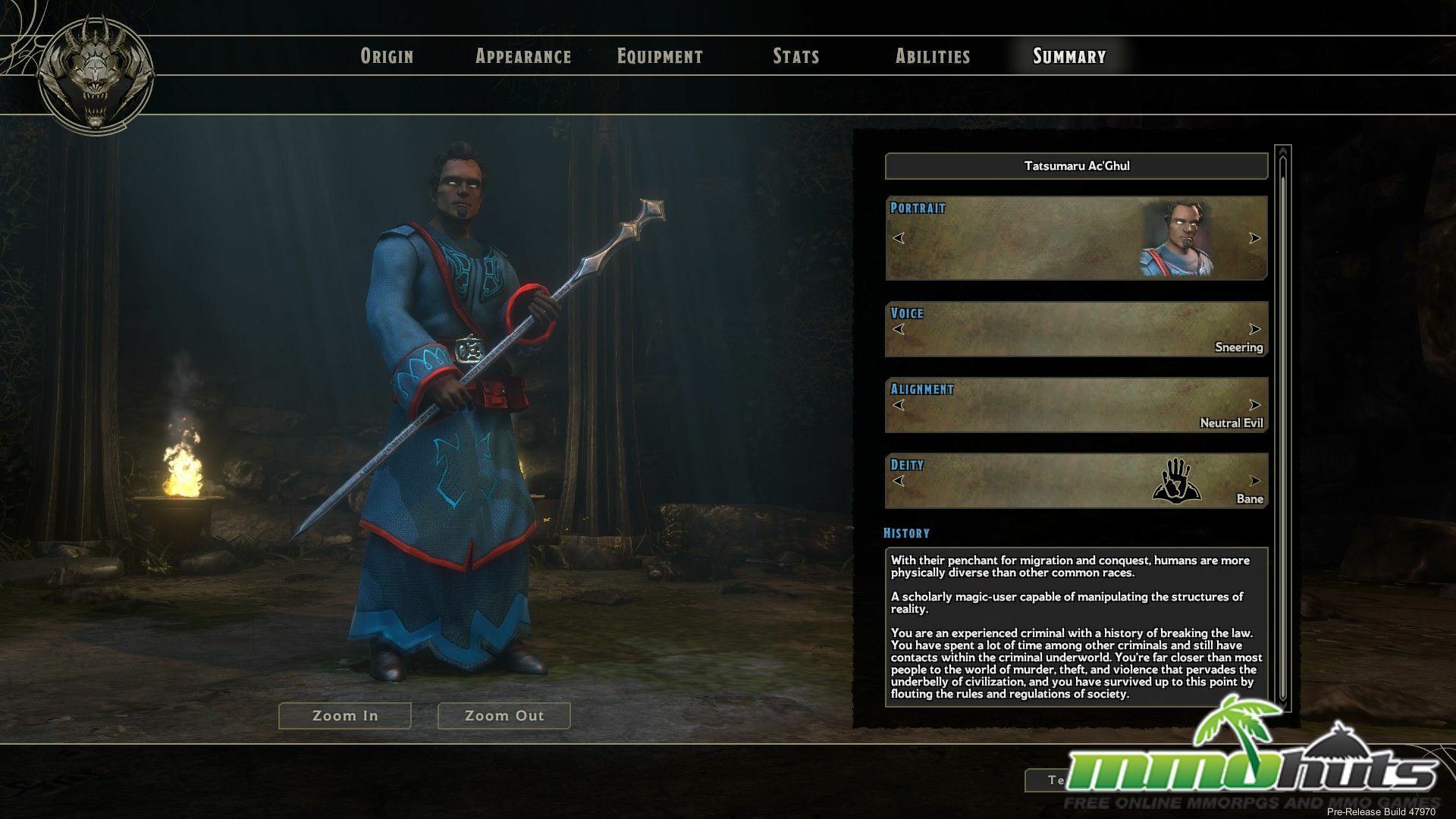 Dungeons and Dragons: Sword Coast Legends had a bit of a setback and pushed the release date back to Oct. 20th, which may have upset some players who were in the Head Start/Early Access, but not me. I understand full well what it takes to make a game polished and good. Is it perfect yet? Not in my eyes, but it’s still a blast to play, and the DM tools make for an amazing way to get your D&D group together and adventure, even hundreds of miles away in a more action-packed setting. In the Head Start you don’t get access to the campaign or anything like that though; just Dungeon Crawl Mode and DM mode, which allows you to build modules (one shot adventures) for other players to download and play. Some require a DM to run them, most of the ones I have seen do not. I really wanted to peek at the story though, I did. And badly! But I did mess around a lot with Dungeon Crawl, deciding that I had a rough time going solo, so I coaxed/wheedled/demanded my editor, MissyS (who I deputized as a member of Bottom Tier) to play with me. After some time, we learned what it means to utilize teamwork. 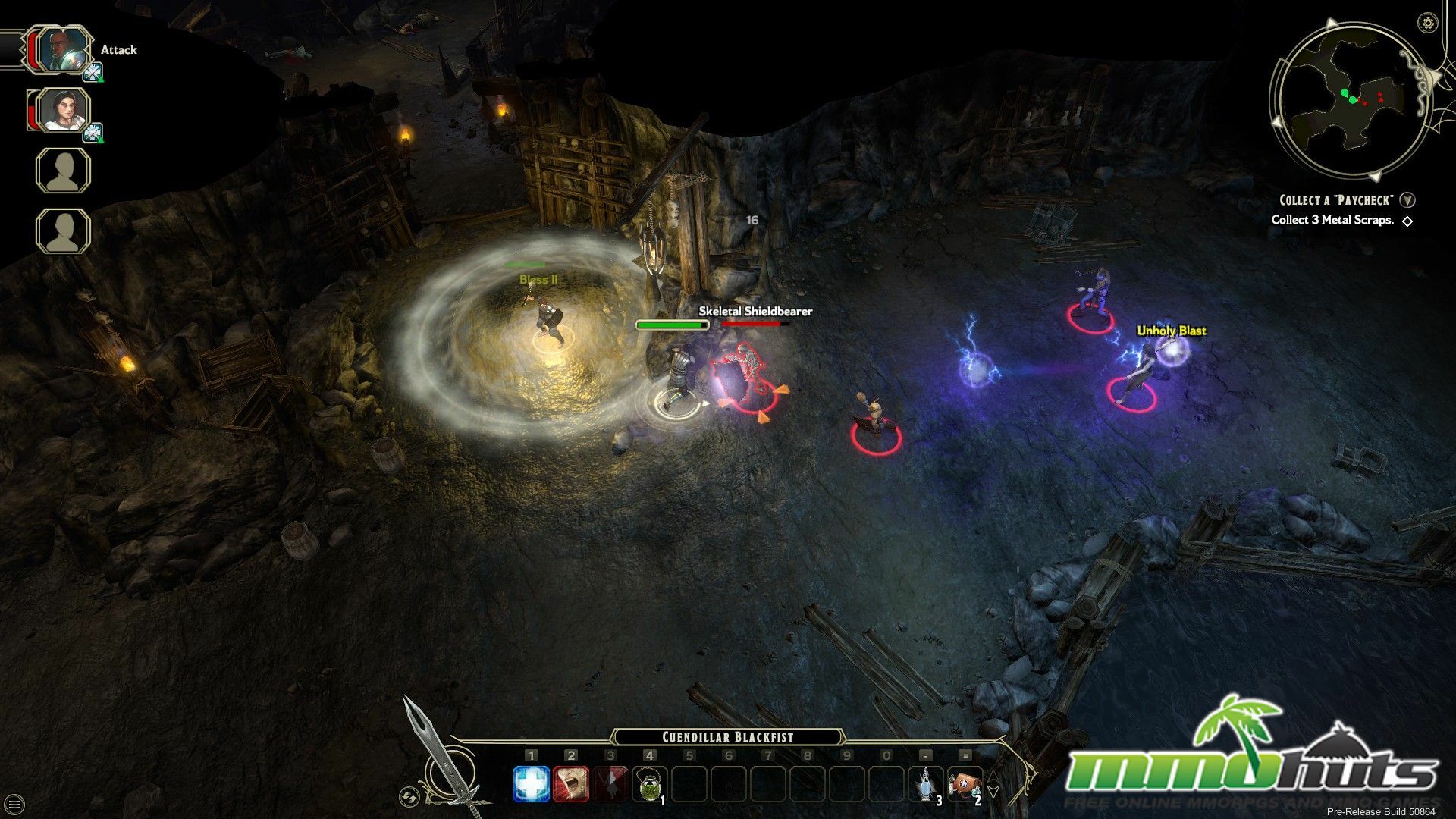 But what do I think, as someone who has played Dungeons and Dragons for well over a decade and a half? Love it. It’s not perfect, but neither is tabletop gaming. There are still some kinks to work out, and there are without a doubt things that drive me insane with anger about it. But at the end of the day, it’s a loving tribute to “Neverwinter Nights,” one of the most famous PC games to be set in Faerun. To be fair though, quite a few successful D&D game has been set there (Neverwinter Nights, Neverwinter, Baldur’s Gate) so it’s not a bad idea to use such a well-established world, rich with lore. The game is beautiful. The setting in the dungeons of all shades is foreboding, echoing creatures and monsters when they’re nearby is intense; the lighting is mostly dim. The character dialogue is a little corny, but I expect that in a way, in a traditional D&D game.

I have one major, intense, unavoidable gripe: WHY CAN WE NOT REST IN A CAMP? Seriously, WOTC? Come on guys. The way the game stands now in Dungeon Mode, you have to run back into a dungeon and die to get full health back. That infuriates me. You are in a “safe” camp as they say in the description. Why the hell can’t I heal there without spending money on a healing potion/having a cleric around?

The game is essentially a dungeon crawl, which is good and bad. Good in that it’s a lot of fun to run amok through a dungeon with your friends, even if there’s suddenly a Vampire that explodes your party without warning or provocation. I still find myself having a boatload of fun. But I’d like to see the DM mode have options to make forest areas, oceanside, whatever. Maybe that’s coming, maybe it just isn’t in the Headstart. But there are lots of dungeon options to run through which I thought was pretty cool. You can even set quest objectives and random rewards (weapon, armor, trinket) for the completing of those in Dungeon Crawl. They are pretty standard quests, gather x item, kill y amounts of enemies, defeat the boss. You can make the dungeons be multiple levels and as I said, you can drop a boss in it, and the bosses hurt. Be advised. 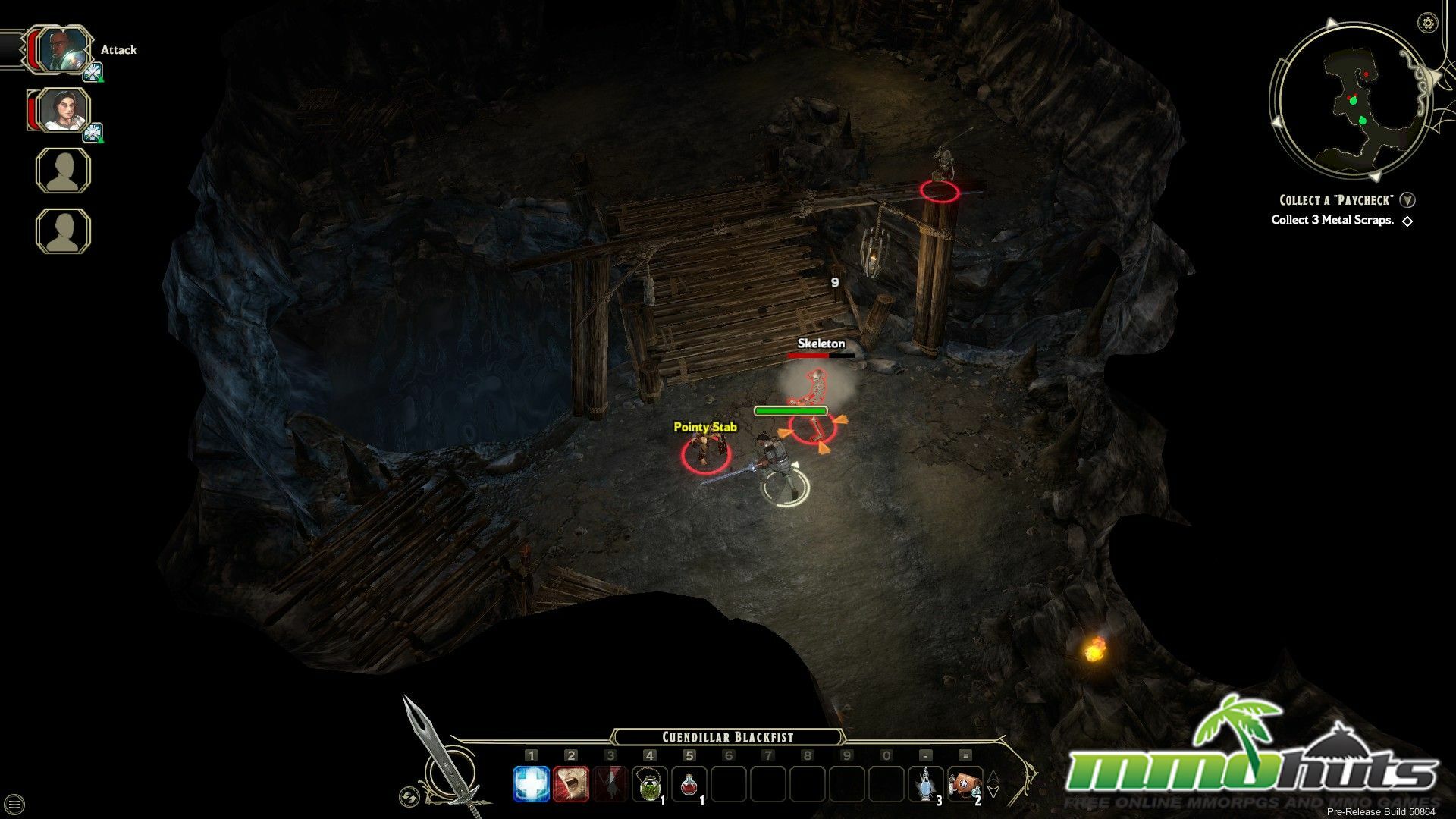 Collecting three metal scraps in a mine is harder than one would think.

Even though it’s a dungeon crawl, it has story, and the DM mode can create storylines, villages/towns to start things off in. I’ve already seen people start up Campaigns/Chronicles via Modules, labeling them as part 1, promising more in a telltale style fashion. You can make simple, Monty Hall Dungeons (Lots and lots and lots of loot) to help players get geared. You can warn people what the level requirement is, or you can surprise them before your forces demolish the hapless adventurers, like what happened to me and MissyS. There are so many interesting things you can do with DM mode, and it allows for DMs across the world to share their creations with other groups of players/friends which honestly fills me with delight. My D&D party is separated by a wide gap, and this could help us have fun like we used to without using third party programs. This could really let our DM flex his muscle. Sword Coast Legends offers a plethora of options to entertain or punish your friends and loved ones, and that’s what D&D is really all about. But what makes this game pretty unique is the attention to detail. When you are playing a character like a Rogue, or Ranger, you can search/detect traps. A circle appears on the ground and you move slower. As a trap shows up in that range, you can disarm it, and generally players within it are pretty safe. If you get too close/make noise near enemies, they agro. Enemies hurt, a lot. Another negative (but it makes sense for this title) is that loot isn’t shared. When bodies have gear, whoever gets to it first gets it. Sure, you can drop it, tell everyone what fell, but if you want to be that guy, you totally can. Gold is shared automatically though, which is good. It’s a definite authentic feeling game. 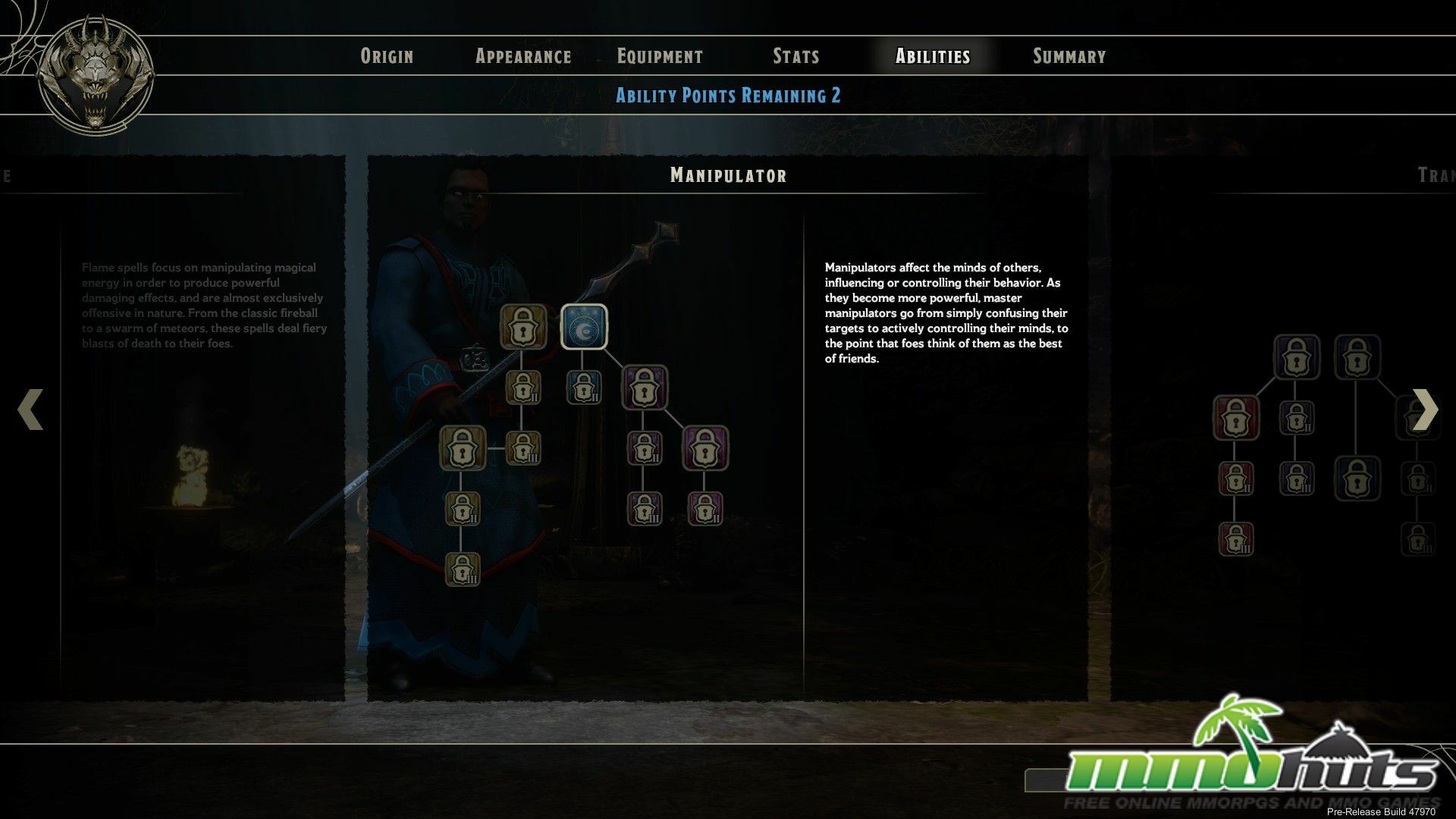 All the fun (and frustration) of D&D character building is here.

Unlike traditional D&D, you have skill trees for each character, with skills, passive and active costing different points depending on what rank it is of that ability (if it has ranks), the power of it, et cetera. I really like how many options each character type has, so you can play virtually however you want. I take some skills from Two Handed fighter, some from the Protection tree, some from the Great Weapon fighter tree, whatever I feel like I need really. I also like/hate the Point-Buy system the game uses. Point-Buy is a traditional character building tool for D&D, where each point you put in a stat costs a set amount of points, growing the higher you go. The character creation is incredibly accurate; you pick a race (subclass sometimes), class, you pick starting gear and a background for the character. The various backgrounds change your gold though; Noble gets more than anyone at 800g I believe. You can write an actual background in your character creation though which I absolutely love. It does however generate one based on choices you made in creation anyway.

Honestly, I love this game. It’s basically everything I’ve wanted in a Dungeons and Dragons game since Neverwinter Nights. In a lot of ways, I view it as a spiritual successor to the series, taking place in the same world, with many of the same important NPCs likely still alive and influencing the world. Are there things I hope I see in it? Yes. Lots of Drow, Beholders, perhaps Obuld Many-Arrows, the Orc Chief-turned Diety. You know what I hope I don’t see? Drizzt. But that’s not relevant to this review. I’m looking forward to seeing the community explode with scenarios at release, and there’s one thing really ticking in my head about it. It has “Modules, as I said above. But with that in mind, is Wizards of the Coast going to release their own Modules/stories on Sword Coast Legends, and if so, will they be free? Will they give players a chance to use this game to publish their own created campaigns? There is a lot of potential to create/share terrific stories, and I’ve seen some real winners so far. Dungeons and Dragons: Sword Coast Legends is the real deal.