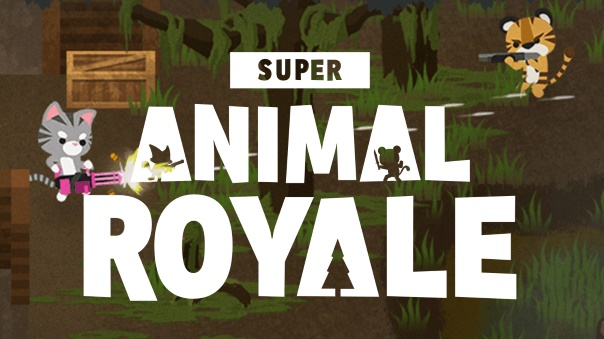 I’ve said it before and I’ll say it again: 2018 was year of the Battle Royales, much in the way 2015 was year of the MOBA and 2016 was year of the Survival Horror. Battle Royales are a dime a dozen these days with a wide variety of options and play styles. The most popular of the genre are Fortnite and PUBG, with a plethora of clones and ripoffs of those titles out there. They’re on every platform imaginable, and I imagine if someone figured out how to network them they would create a Battle Royale for the TI-85 scientific calculator. To be quite candid, I’m sick of Battle Royales.

Be that as it may, my time spent with Super Animal Royale wasn’t as painful as it could have been. Super Animal Royale (which I’m going to call “SAR” for the rest of this review for brevity’s sake) has all the classic elements of a Battle Royale, but is one of the rarer sub-genre of 2D BR games. To be quite frank, SAR is a pretty boiled down game without a ton of flashy frills in regards to gameplay. This is, to me, actually a very good thing.

The story is that you are one of a number of intelligent animals in a safari theme park. The animals have taken control and are on a rampage out murdering each other. At least they do the murder thing in the cutest way possible, with little dances and celebrations and giant hamster balls. Yes… giant hamster balls… of death.

As you complete matches you, the player, level up. Leveling up lets you obtain advanced recipes for unlocks. These unlocks are your actual animal that you take into battle. Your first fight you’ll have access to a fox. After that you’ll also gain bears and some others. Your first ‘unlockable’ recipe will be Skullcats. Each species also has a variety of subspecies. Unlocking these critters seems to be the only real point in playing, other than just the fun of playing a Battle Royale.

As for playing Battle Royales, the simplistic nature of SAR makes it fun. As with many BR games you’re dropped into the arena map with just a melee weapon. You then run around breaking boxes and finding guns stashed in buildings. You can also find weapons by chopping down tall grass. Because, as the developers point out on the store page for the game, “That’s what you do with tall grass.”

You can also find grenades to throw, armor, and ‘health juice’ which you can drink to replenish your health bar if you’ve taken damage in a firefight and managed to walk away. As with most BR’s, equipment is tiered. White → Green → Blue → Purple. If it goes higher than that, I didn’t see it. The higher the tier, the better damage or protection the item offers. Again, all very basic Battle Royale stuff.

One element that makes SAR stand out from other BRs is the fog of war system. You can only see enemies that appear within your direct line of sight. If there is something between you and an opponent, such as a rock, then you won’t see them. This can actually make for some interesting tactical maneuvers mid fight, even allowing you to circle behind an opponent and blast them. Or, in my case, to get circled and die. But hey, it’s fun.

As you play, a poison cloud, presumably released by the safari park owners, seeps into the park. If you’re caught outside the safety circle, your health will rapidly deteriorate and you will die. In SAR the movement of the poison cloud is pretty steady, and all totaled the matches probably don’t last longer than five minutes. It also didn’t take me longer than a minute to get into a match, meaning the turnover is usually pretty quick and action paced.

The community seems to be surprisingly positive and even losers are good sports about it. Perhaps because of the rapidity of matches, allowing for quick revenge, or another chance at the “top of the food chain” as winning is called in SAR. Whatever the case, it was a pleasant change from other games in the genre.

There are extensive customization options, not only limited to your type of animal, but also in what they wear, which dances they can do in game, and what their victory celebration looks like if they win the match.

The controls feel good, and tapping space bar allows you to do a little dodge roll to move more quickly across the field. I sort of feel like maybe this maneuver should have been given a cool down or stamina cost of some sort. Most people just hop around the field incessantly.

There’s really not much else to say about SAR. There’s a free demo available to test it out, and you can upgrade your account from the demo. It’s 13 bucks at full price on the Steam store, though you can opt to drop another 10 for the Founder’s Edition and get a bunch of skins. There are no other sorts of microtransactions or loot boxes in the game that I saw. Unlocks come through gameplay, which is another refreshing change.

At the end of the day, Super Animal Royale is just another in a long line of Battle Royale games that we’ve seen in 2018. Be that as it may, it’s one of the more fun examples of the genre, and if BR games are your thing, you should definitely pick this one up, especially at the low price point.