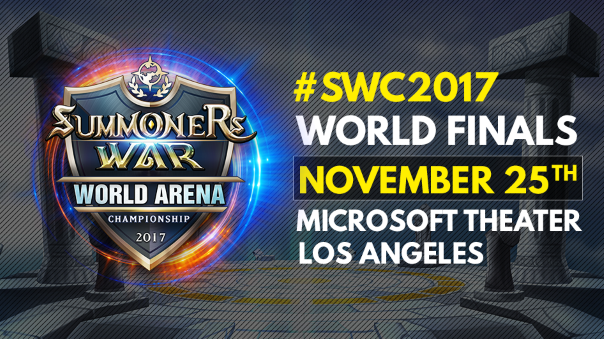 On November 25, the world’s top summoners will compete in Los Angeles at the Microsoft Theater in the Summoners War World Arena Championship.

The 16 players in the inaugural World Arena Championship include: Tomato and Mr. Pro from Shanghai, ShallotX from Taipei, ZERO from Hong Kong, 02loveo from Bangkok, Barion, Psy!, Tiger and ChuffIes from the United States, Kabzon and Thánh-Đỏ5* from Paris, UT-play and Ojiipen from Tokyo, Skit and ZDoL from Seoul and iGenus, the online winner.

Besides the final tournament – which will have players competing for a $50,000 prize pool – Com2us will also offer a new Summoners War experience. Players will be able to meet with influencers and cosplayers, enter contests, grab new swag, and more. This is the first step in Coms2us offering more community-focused events and expanding the Summoners War brand into other media including merchandise, animation, and comics.

The Summoners War World Arena Championship is the culmination of our fans’ unbridled enthusiasm and a terrific way to end such a momentous year. We can’t wait for fans to join us for the ultimate Summoners War experience at the Microsoft Theater and we invite our fans from around the world to watch the action live on Twitch!

Free tickets are available for the championship event at summonerswar.com, or you can tune in to watch on the Com2us Twitch channel.