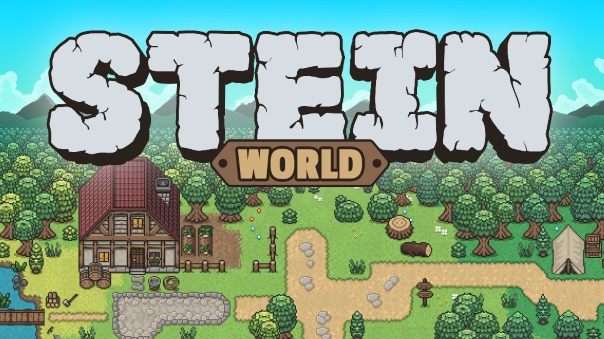 I have to admit, I was a bit skeptical when asked to review the game stein.world on Steam. At first glance the game seemed rather simplistic in nature. The graphics are 16-bit styled, and reminiscent perhaps of Stardew Valley on a very basic level. The first few minutes of the game didn’t do much for me either, but as I gave it a bit more time, I admit, it started to grow on me. I’m not without some misgivings regarding the game, but I can see why those who like it do.

stein.world starts you out all but naked, in a tavern, having slept off what was apparently quite a night of partying. The story revolves primarily upon your character, and that of every other player, trying to reclaim their priceless family heirloom: a drinking stein. After a bit of a tutorial about talking to people, and how quests work, you discover that a band of brigands took your stein while you were drunk. Seeing as how this band is far more powerful than you, you’re going to have to toughen up to get it back. 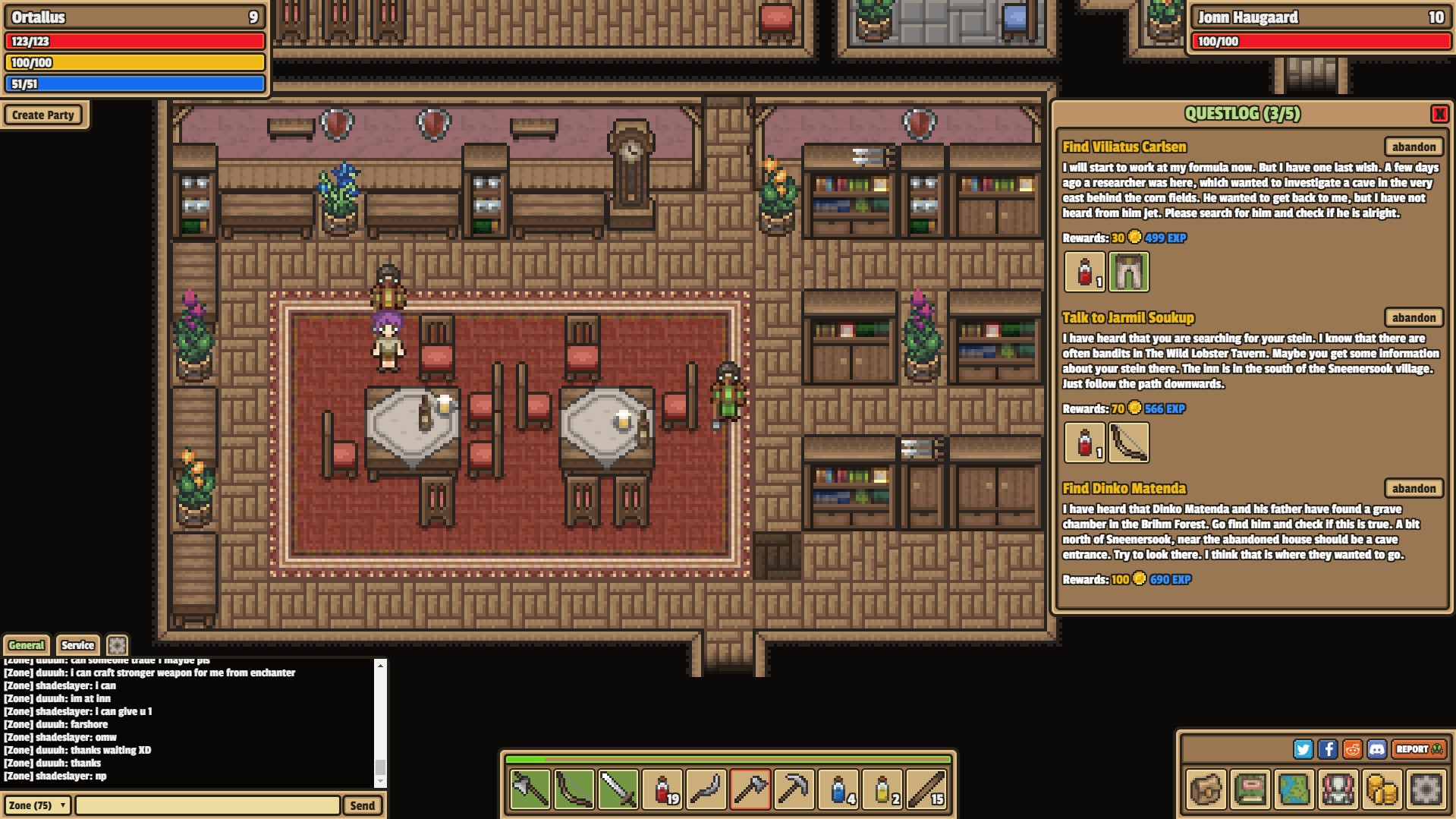 I just wrapped up the quests at one hub, and thus the game is sending me to my choice of new locations, with new people to meet and kill!

And so begins your adventuring life. This life consists mostly of a chain of quests leading you from one quest giver to another, or sometimes one quest giver will suggest you visit more than one location. Along the way you accomplish some pretty basic and familiar quests: retrieve the item/fetch quest, kill X mob quests, collect X item (whether from mob or sitting on the ground). All very basic stuff from any sort of MMO standpoint. In all fairness, the game does have a bit of humor about it that takes some of the dryness off the quests, but they do still lack any sort of innovation.

As you travel, you will also see a fair number of other players. The game has a pretty reasonable population, given what it is. Most of that population tends to be talkative and friendly on the chat. At the time of this writing, there’s only one server available, an EU server, but several more servers are planned, as well as more platforms, including mobile, on which to play stein.world.

There is a comprehensive and useful map available (default m key), and you should make use of it. One thing I do appreciate about the game is the fact that you can have the map open even while you’re traveling, and your icon moves as you do. This makes it easy to find particular locations, such as towns, quest hubs, vendors, and profession trainers. 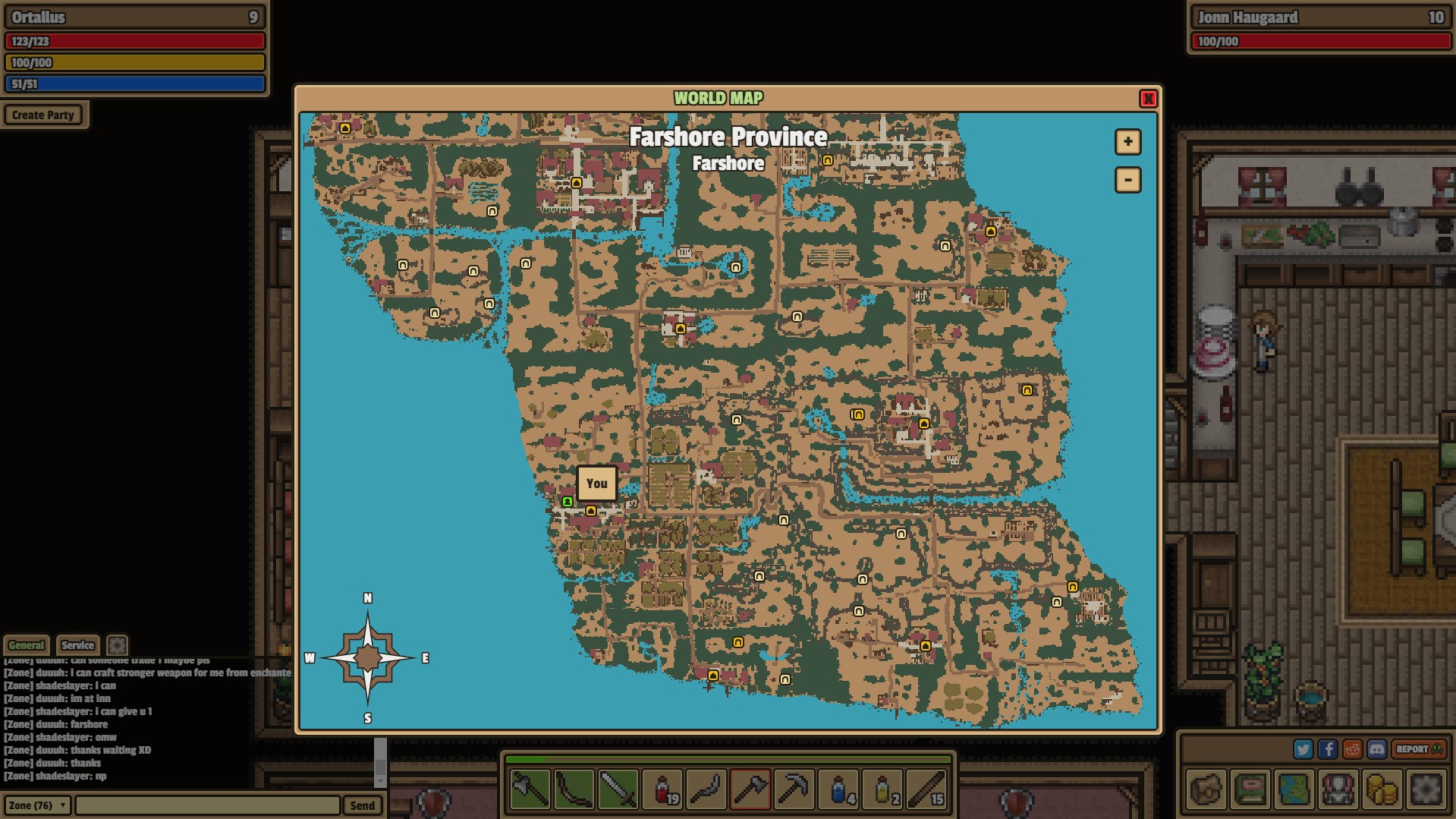 There’s quite a lot to explore in stein.world, and you’ll come to rely on your map heavily.

These last are fairly important to discover early on, if you enjoy crafting. The crafting itself is, in my opinion, extremely grindy (at least for free players, but more on that later). You need a large quantity of materials in order to level up your various crafts, of which there are 3 gathering crafts; lumbering, herbalism, and mining, as well as 5 actual creative crafts: enchanting, tailoring, weaponsmithing, armorsmithing, and leatherworking.

Most are pretty self explanatory, but it’s worth pointing out that in stein.world, enchanting includes the act of creating magical weapons. The act of crafting itself can be fairly tedious, as you can’t move while doing it. Generally speaking, I tried to make use of this time when I needed to wait for health to replenish, or if I got up to use the restroom.

There are three general classes of weapons: melee, ranged, and magic. Some of the magic weapons can also cast healing spells. It’s also worth noting that each weapon has a use time and a cooldown time. The cooldown time is actually separate from the global cooldown for using all objects, and thus if you’re quick at switching between weapons you can use another weapon before the cooldown of the first weapon finishes, and then switch back. When I asked about this, most players assumed it was by design, suggesting that weapon slots were essentially “Skills”.

This seemed kind of hinky to me, but it’s whatever. The combat is very trivial most of the time, but it’s not entirely un-fun. Monsters and animals (and presumably human adversaries, though I never encountered any in the 10 or so hours I played) are usually aggressive, where it makes sense for them to be so. Domestic pigs and sheep won’t attack you, but wild boars and giant wasps certainly will. Despite this, you can generally walk past them without getting hit, so at least it’s not like you have to do combat with every creature you encounter.

While stein.world is free to play, it seems you’re pushed fairly strongly towards buying a subscription. If you don’t do so, for example, you’re limited to a total of 10 people on your friends list. Even this 10 was given grudgingly and after a good deal of complaint from the players of the game when originally you could only access the friend list function at all if you had a sub.

Additionally subbing nets you 33% more EXP, both for leveling your character and for your craft skills. This is monumental, given just how grindy the craft skills are without this bonus. As a free player you’re only allowed a maximum of 5 quest slots, where subbed players receive 20. Your time for respawn as a subbed player is reduced by half, being a paid player lets you read 3 skill books at a time versus a free player’s one, and finally: participation in dungeons as a free player requires you obtain keys by grinding mobs. Subscribers may access dungeons without limitations. 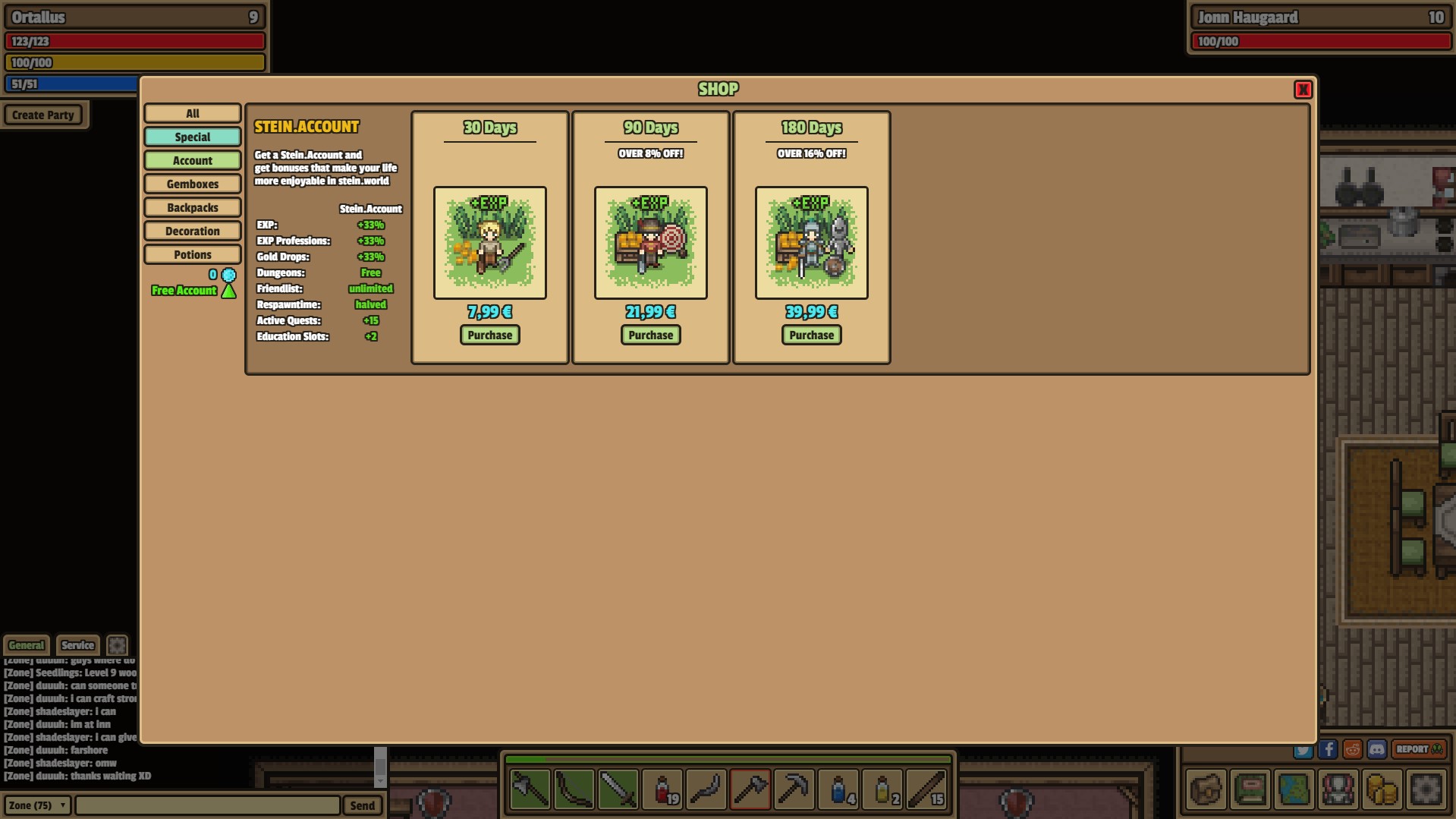 Something else the game hits you with is having to purchase backpacks with gems, their premium currency. Backpacks extend your inventory slots, and this is again a fairly large deal, because most of your gold is obtained by selling trash loot and gear that is dropped by mobs. Plus, if you intend on crafting, a great deal of your inventory will be taken up by resource materials. Only at level 30 will you be able to access a bank where you can store some of your items.

I get it, the game is free-to-play, and despite this and the fact that it’s a small development team is pretty well put together. The breadth of gear options is pretty extensive, and as I understand it as you gain in levels it becomes more so. There are a variety of builds you can focus on, such as healer, tank, ranged DPS, or what-have-you. The design of the game world itself is well done, too, despite the throwback graphics. It’s charming and immersive in its way.

I also believe the game isn’t quite done yet. It’s not listed as an Early Access title on Steam, but one of the patches recently put out said v0.3.4 or something to that effect, which suggests to me it’s still in early development stages.

At the end of the day though, stein.world is a free game, so there’s really nothing but some time to be lost in giving it a try. You might just find yourself charmed by the game and wishing to devote your time to it. Or, like me, you might get frustrated with inventory management and resource grinding, and decide to just move on to pastures made from polygons instead of pixels.