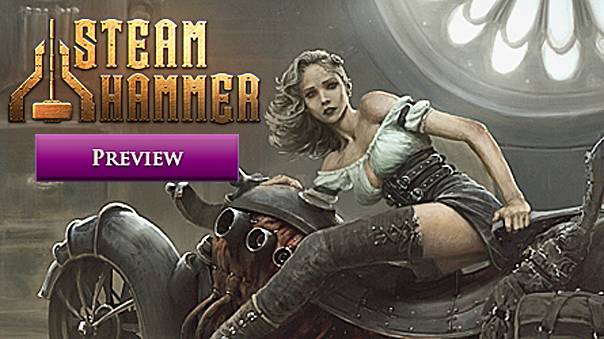 For all those gamers out there that enjoy playing those open world survival RPG type games like DayZ, Rust and ARK: Survival Evolved, I have a question for you. Has there ever been a time where you find yourself playing those games and said, “You know, this is great and all, but this game really needs more tesla cannons and steam-powered jetpacks.” Well the folks at SF Team have got you covered with a new steampunk themed RPG called “STEAM HAMMER,” now available in early access. 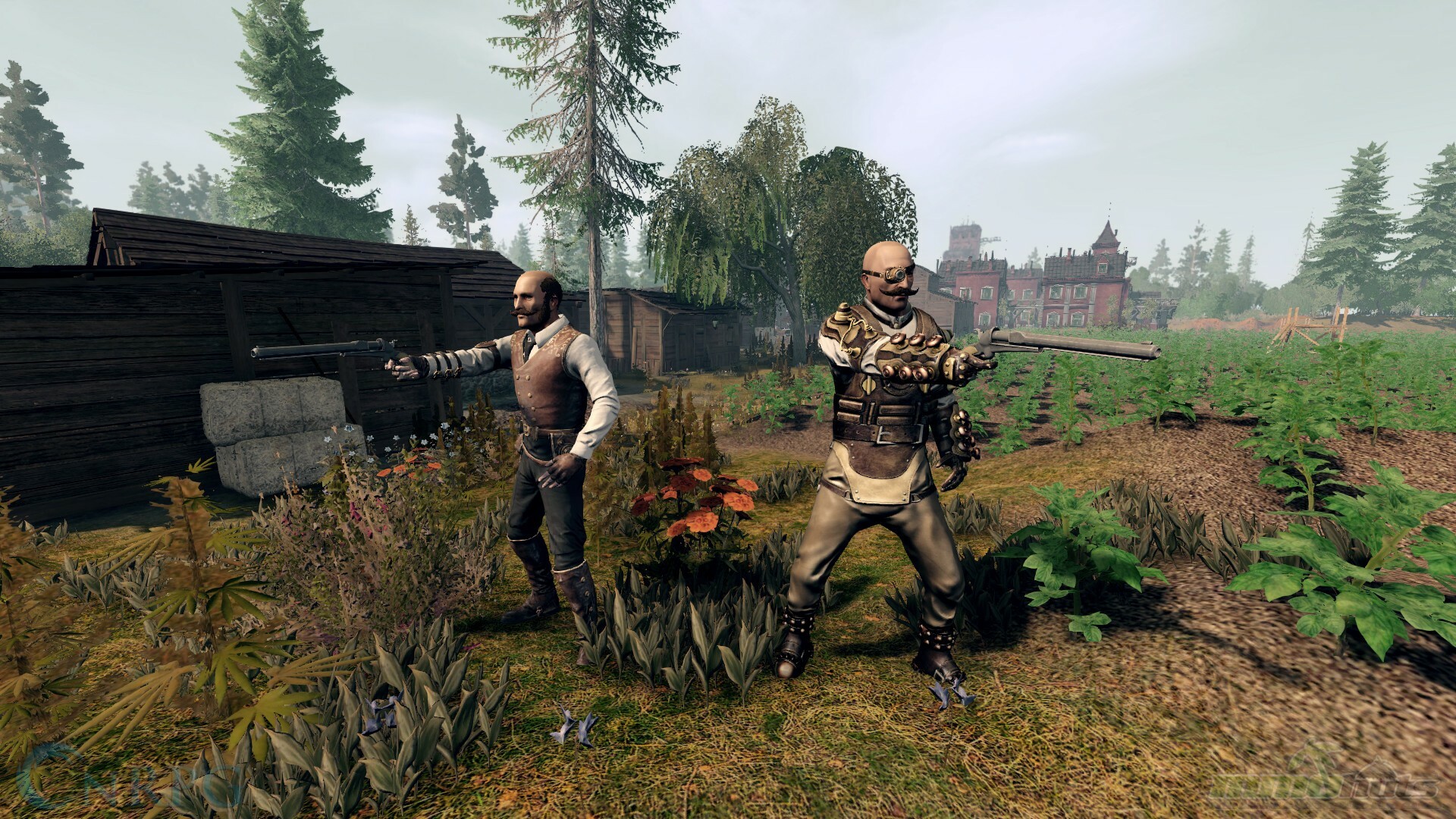 Besides its late 19th century theme, Steam Hammer sets itself apart from similar titles by focusing on PvP and skill development. Everything in the game world has to be built and created by players, and can just as easily be destroyed by other players, creating a balance of forging alliances between players while protecting what is rightfully yours. With the option to change the landscape, develop technology and more, Steam Hammer plans to be a steampunk fanatic’s dream.

While I haven’t been too well versed when it comes to sandbox games of this nature, the steam punk theme had me intrigued enough to give the game a try.

Just like recent sandbox games, players can join or host their own servers with their own rules and settings, allowing for a more customized and personal experience varying from player created world to world. Since I wanted to get more accustomed to the game at my own paced (and because of fears of ganking), I decided to start things off slow on an empty server. 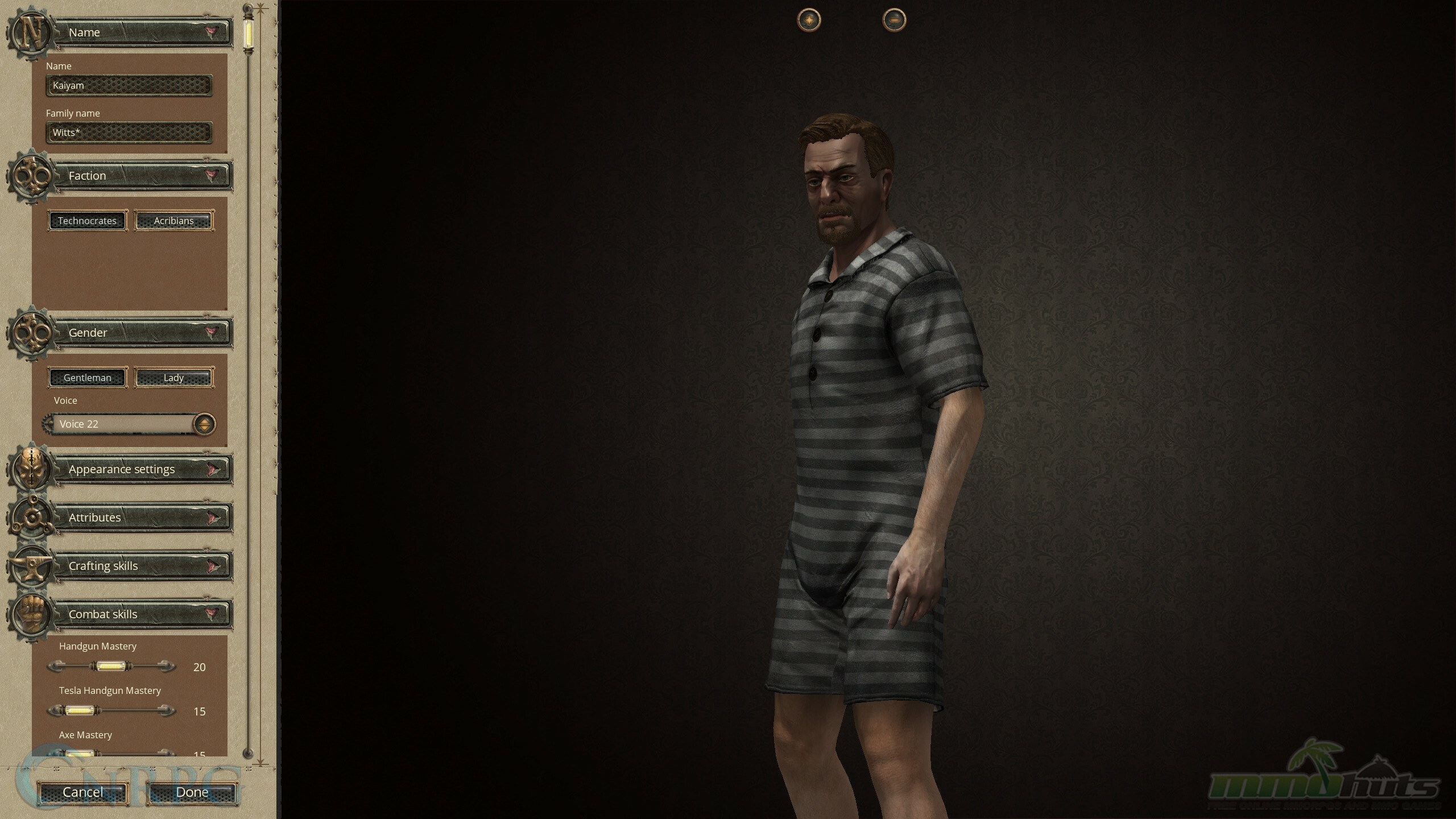 Expect character customization to stay basic while the rest of the game gets ironed out. Might be a while.

From here, I was able to create my first character, and at the moment, the creation options are a bit on the limited side with a few hair styles and facial options. Only one faction is currently playable and only male characters can be created. Outside of visual options, players can select different attributes to have their characters specialized in different skills for crafting and combat. Being proficient in one category for attributes will make you less proficient in others, so trying to do something like maxing out your strength will make you terrible at intellect – staying true to the nature of people deciding whether to use brains or brawn.

After making my character, I was dumped right into the world of Steam Hammer… The open… vast… and empty world of Steam Hammer. The current in-game time on the server was late at night, and I spent a ridiculous amount of time stumbling around in the dark, trying to figure out where I am and what I’m doing here (just like I do every night in real life). Eventually, I found out that I had a torch available in my inventory which I was able to equip to finally see my surroundings a bit better. 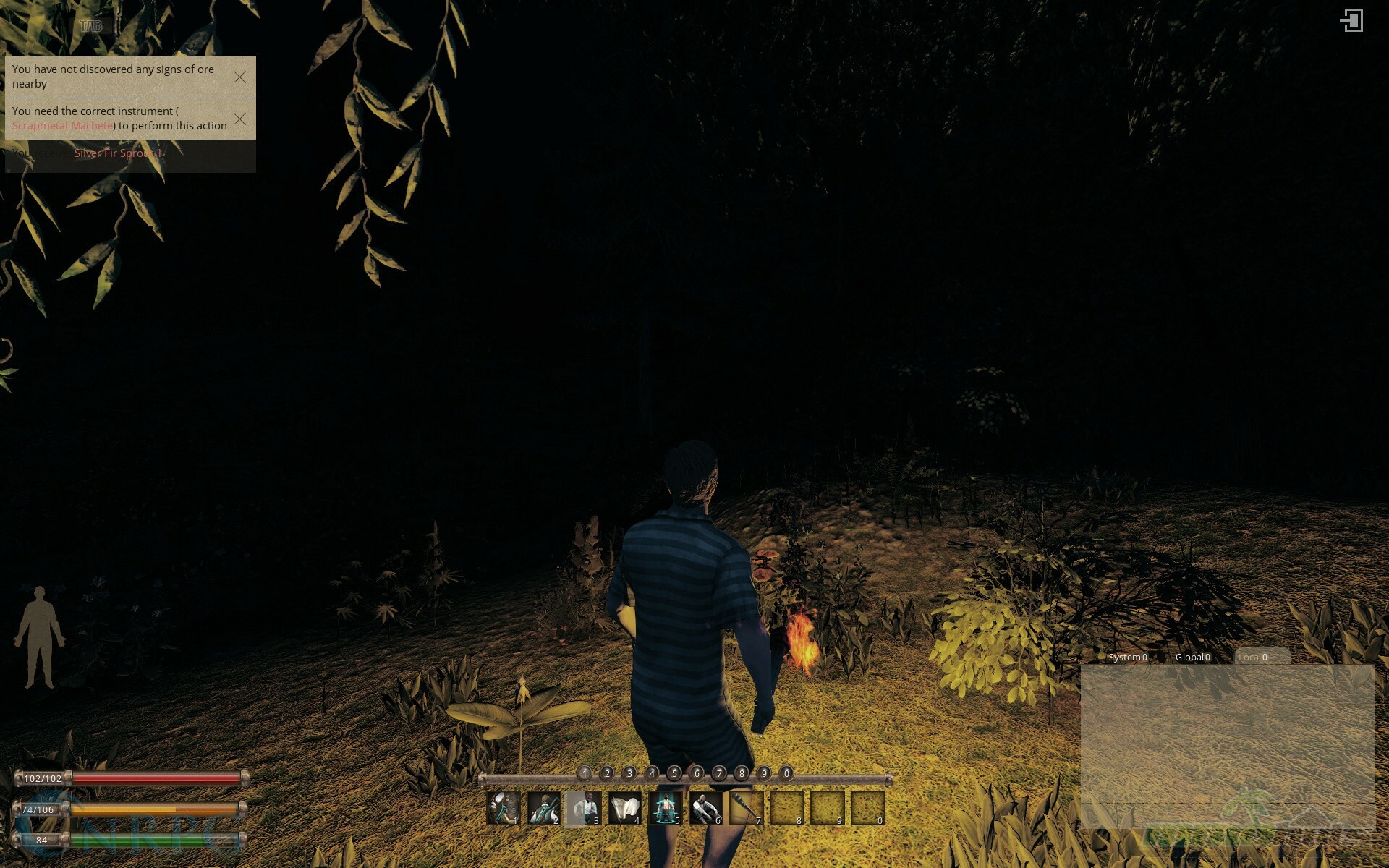 To experience night time on an empty server is to know true loneliness.

From there on, I learned more about foraging, crafting and other keys to survival, but I couldn’t help feel a bit bored as the crushing loneliness started to get to me. I know I had planned to start things off slow without haven’t to deal with other players, but there was no NPCs around to make the place feel even remotely alive. Not even some animal NPCs like wolves or something to make things interesting. So with that said, I decided to stop playing by myself after several aimless minutes and looked for a more active server to play on.

Since each server is unique, I had to recreate my character and start over from scratch, which wasn’t too big of a deal, since well, I barely made any progress on my first character to begin with.

The next server I jumped on was set in broad daylight, so no need for me to stumble around and figure out where I was going, and this time around I was in a much more open location than before. I decided to search around for things for my character to take advantage of, and I stumbled onto a field of copper wreckage along with an orange tree, from which I decided that this spot was going to be my homebase. From all the copper and a few twigs in the area I was able to make some basic tools, allowing me to start work on simple structures like signs and fences.

It was at this time when someone spoke to me… in the game’s global chat. While I was kinda miffed by the fact that you can chat with all players from anywhere in the world instead of just whoever is near your character, just being able to communicate with someone really helped me not feel so lonely.

Still, I wanted to lay down some laws just in case any player stepped into my domain…

Act crazy. Show the eyes slowly. Twitch 'em a little. Ain't nobody messing with your oranges then.

And it was true: No one did step into my domain after I spoke those words… No one at all, really… because I actually could not find the other players on the server whatsoever. While I’m not so certain how big the game world actually was on the server, I did know that there was only six active players around at the time, and this was one of the more active servers on the server list.

And that’s kind of my main issue with the game at the moment: There’s barely anyone playing. Building anything bigger than a sign or a fence requires a huge amount of resources to be piled into it, which obviously means that people need to work with others in order to get things built, but with no one around, there’s no way a player like me was going to build anything cool. Since I couldn’t find anyone around me (and didn’t have too much time to seek them out) I was left bored and uninterested to play on any further, which is a shame because just from the gameplay footage alone, I can see where a lot of the fun would lie: building cool steampunky things, fighting against other players using steampunky things and what not. But it became pretty clear that I wasn’t going to see any of that stuff in action anytime soon. 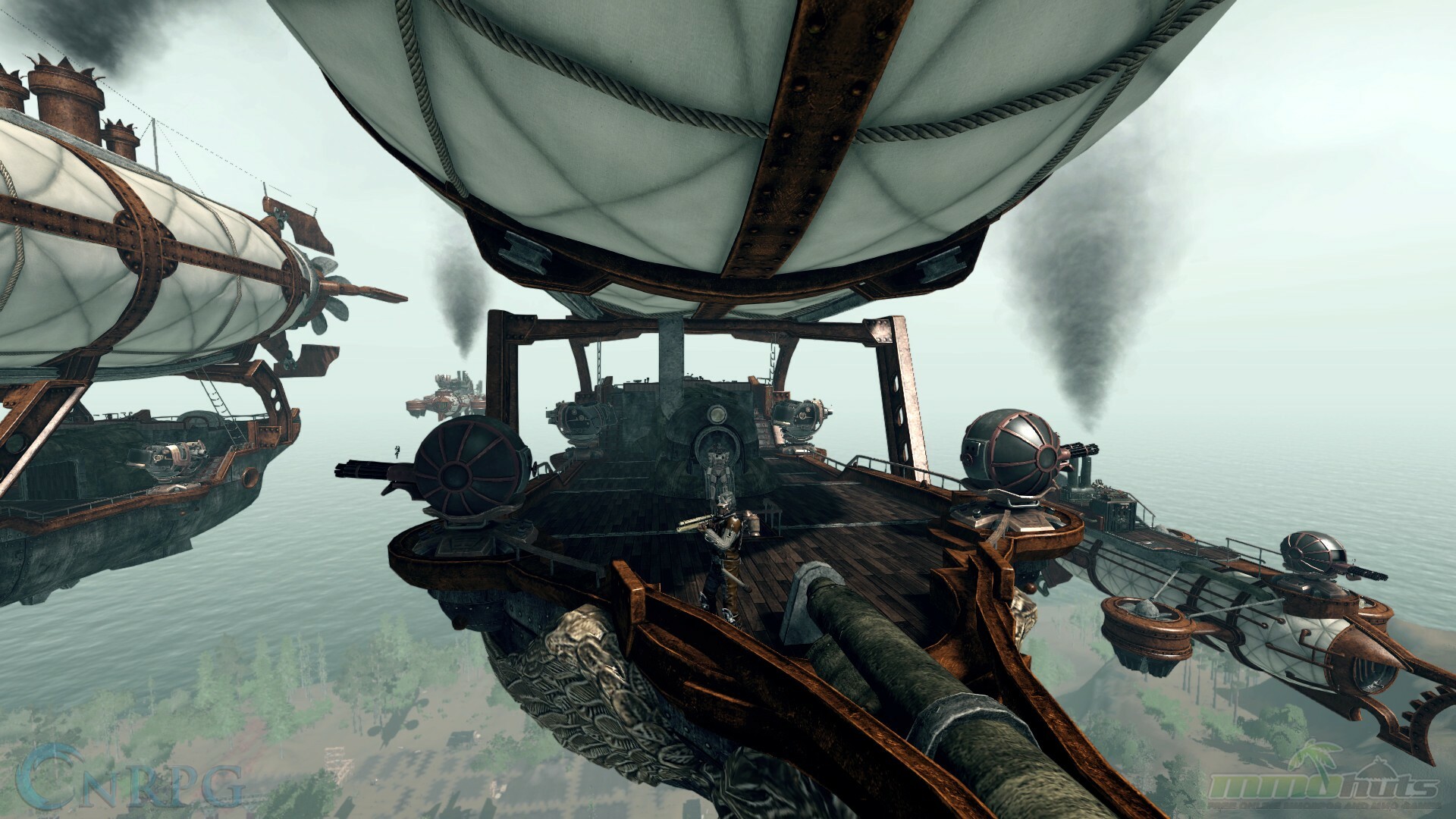 Stuff like this is only a fantasy until the playerbase picks up.

Overall, my impressions of the game is that it has a lot of neat ideas going for it, but the lack of players is what kills any interest for me. I’m sure once the developers push forward and more players decide to jump in, it will be a much better experience, but for now, I’d say unless you’re really eager to jumpstart a server by yourself or with a few friends, I’d say wait a bit longer before looking into this one. I will be revisiting this game again in a few weeks or so to give an updated impression on the game, for sure.