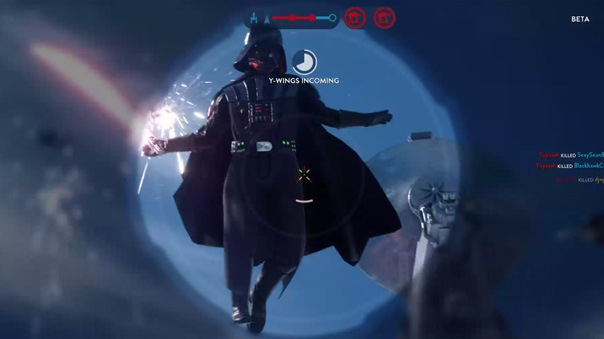 For those unfamiliar with the Battlefront series, the latest Star Wars Battlefront game is an arcade shooter built upon the latest Frostbite 3 Engine allowing players to take part in large scale battles. The game can be played in both first person and third person, I personally prefer playing in first person but it is nice to have the option available. It might be important to note that third person can give you more vision and therefore might be better if you are looking for every edge over your opponents.

Survival pits you and a friend against waves of enemies

In order to participate in these battles, you must, as expected, go through the game’s main menu. When I first booted up the game, I was quite impressed with the graphics and UI design. Having an appealing and intuitive user interface can make a huge difference for every game. The game uses a simple card interface to maneuver through the various options and join a game. Before we move onto joining a game, I would like to commend the Star Wars Battlefront team for offering a good amount of game options. They even offer colour options for the colourblind; great to see more games being accessible to all.

By using this card menu, players can queue up for multiplayer or single player game modes. In the beta, players are able to try out one single player mode and two multiplayer modes. The single player game mode, Survival, pits you, and optionally a friend, against waves of AI. If you survive all the waves, you come out victorious. The beta only features one map for this game mode but additional maps will be unlocked in the game’s full release. Each map can be replayed at higher difficulties if you are up for the challenge.

The game is always action packed

While single player is fun and all, I personally love playing shooter games online. The beta gives us a good feel for how the game will play upon full release with the Drop Zone & Walker Assault game modes. While Star Wars Battlefront does feature large scale battles, you do have the option to take part in smaller scale battles through game modes such as Drop Zone. In this game mode, players play in an 8v8 format and must work together to capture and hold incoming escape pods. The team with the most pods by the end of the match or the team to reach the goal first comes out victorious.

Once a player feels comfortable with the game, they can jump right into 40 player battles with Walker Assault. In this game mode, the rebels must prevent the Imperials from marching their massive walkers towards the rebels. There are objectives around the maps such as uplink stations that must be captured to take down these walkers. These 40 players are always action packed due to the size of the map. Maybe we will have larger maps in the game’s full release but for now the map size ensures that you are always in combat.

Power Ups can be found to transform into well known characters

Overall, the maps are well designed and look great. My only complaint about the level design is that the environment looks dead. It is great to see battles going on in the skies but the natural environment like the snow and rocks don’t feel very natural. This is a minor complaint as adding additional effects to the environment can be quite taxing on systems so it is understandable that this feature was left out. However, it would have been nice to have such a feature as a toggle for those with higher end systems.

While the map design is well done, I am not a fan of the spawning system. When fighting in these wars, one would think that pushing ahead and securing an objective would let your army (team) focus on what is coming up. However, thanks to the spawning system, sometimes you have enemies that spawn behind you. Because of this, you are forced to continuously watch your back for enemy spawns when you should be focused on pushing ahead. I have personally spawned right behind the enemy so I can confirm that this is due to the spawning system and not because the enemy snuck past us. I hope this issue is resolved upon the game’s full release as it can be fixed with a patch.

The maps make you feel like you’re in a war.

As far as the gameplay goes, Star Wars Battlefront feels more like an arcade shooter than a more competitive shooter. It is easy to pickup and play the game. The guns are easy to use and you don’t need a tutorial to pilot the various vehicles. This can be seen as a plus as it will allow a larger audience to get into the game, but the individual skill cap is not as high as other games. Rather than focusing on improving your individual skill, Star Wars Battlefront greatly rewards teams that are coordinated. Even if the individual skill aspect is not very hard to pick up, there is a lot of complexity when it comes to teamwork and strategy to please competitive players.

Use powerups to pilot aircraft and other vehicles.

In order to unlock new weapons and side arms, players must level up and purchase new equipment with credits. I am personally not a fan of systems that force you to grind for new equipment but it’s not too bad as everything can be earned simply by playing. The beta limited players to rank 5 equipment, but I am sure there will be additional unlocks available in the full game.

After ranking up, players can purchase new cards.

Conclusion: Easy to Pick Up and Play

I think the main selling point for Star Wars Battlefront will be the ease of getting into the game and jumping straight to large scale battles. You don’t have to spend hours training and practicing your aim to learn the various weapons and pilot vehicles. Even with this low skill level required to begin, there is a lot of complexity available when it comes to teamplay and strategy.

While the game is still in beta, I do not see anything major being changed with the game, especially since the official release date is right around the corner. Some players may say it is too soon or unfair to judge the game now, but I think EA has done a great job with providing players with a beta that can be used to determine their interest in the game. If you are unsure whether Star Wars Battlefront is your type of game, simply load up the beta and try it for yourself.

The game is definitely fun to play but I do not personally see myself picking it up on release day. I may check it out again if it is offered at a discounted price but the $60 price tag does not appeal to me. However, if a group of friends end up purchasing the game, I will follow suit. The game does a great job at rewarding teams that work well together, and I can see myself enjoying my time playing Star Wars Battlefront if I am accompanied by a group of friends.