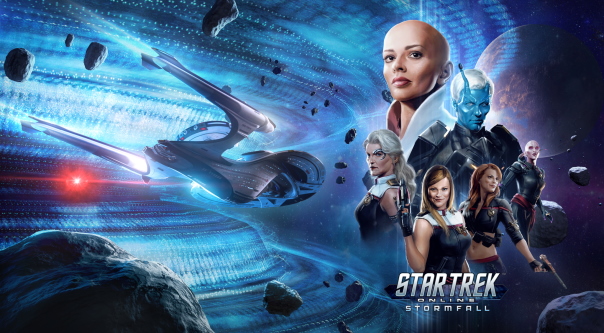 Star Trek Online welcomes console players to its latest update, Stormfall! Featuring original cast members from Voyager, Deep Space Nine, and Discovery, Stormfall offers two new featured episodes, a remastered Starfleet tutorial, a rebuild of the TFO “The Assault on Terok Nor”, and the “Heart of the Storm” special event.

The Lohlunat Festival is also ready to return! Running June 30 through July 30, players can travel to the planet of Risa to take part in summer games. This year’s prize is the Cnidarian Defender (T6), which can be flown in saucer and jellyfish modes. Via press release:

Festivities for this year’s event, all of which progress players towards the new ship, include Powerboard Races, the Biathlon, Horga’hn Hunting, Scavenging with Sovak and the coolest Dance Party this side of the galaxy. Players can also earn credits towards hot new items available in the Summer Event Store, including baseball uniforms, floaters and powerboards based on the Andorian Blue Bores baseball team, and new Andorian themed modules, kit frames, Tribbles and Caracals to make sure it’s a cool summer.

Star Trek Online has also teamed up with CherryTree Inc. for special promotions: