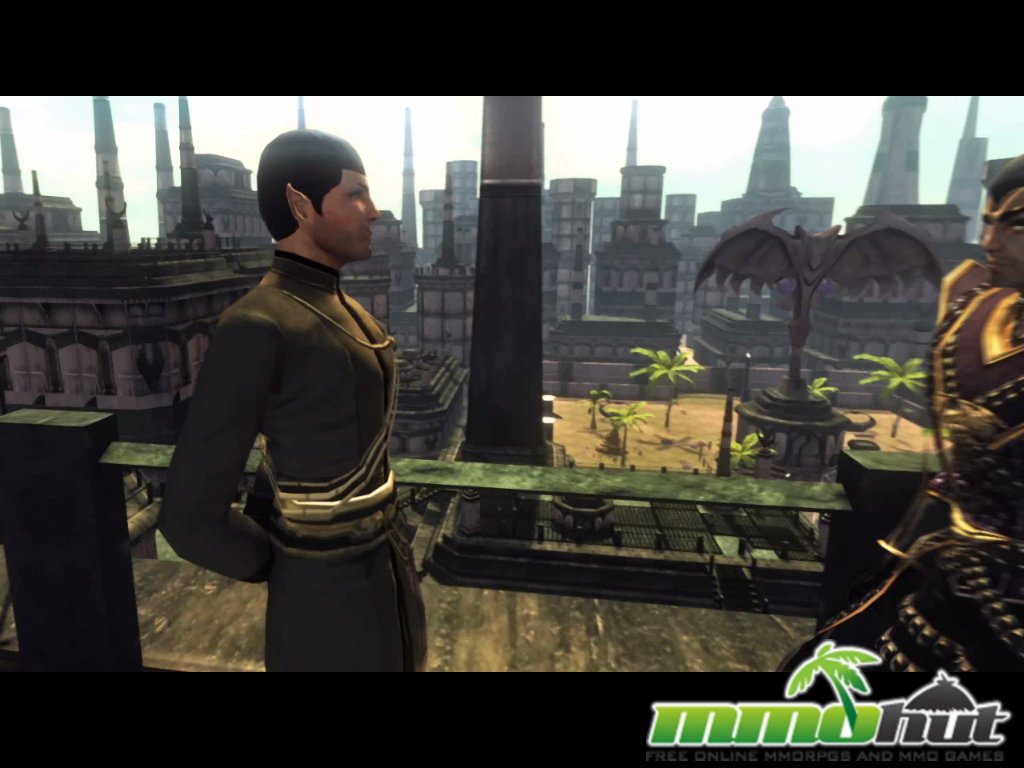 Star Trek Online (STO) is a 3D sci-fi themed MMORPG that’s based off the long-running television series known as Star Trek. Step onto the infamous U.S.S. Starship and become part of the Starfleet legend. Players start as lieutenants and can work their way up the ranks to admiral status. Complete various missions, recruit skilled officers to join your crew, explore, and fight. Participate in hand to hand ground combat on an alien planet or wage war in tactical ship battles with friends. Customize your ship with an array of weapons and advanced technology for powerful attacks. Add more ships to your fleet and even create your own alien race in this familiar space adventure.

Most of STO’s gameplay consists of tackling missions and exploring. Quests vary from reporting to various NPCs to killing an invasion of drones with your phaser gun. Performing tasks like using one of the consoles on the starship to hail the U.S.S. Khitomer or beaming up to your ship transports gamers into the Star Trek Universe. It’s a nice touch and adds to the allure of the game. As players advance in their character’s career they can acquire additional skills that can be performed during combat. Use your stun beam, execute a perfect haymaker, backhand, snap kick, uppercut, or palm strike to enemies that get too close for comfort. The mixture of ground and space combat makes this game stand out from other space themed MMOs. 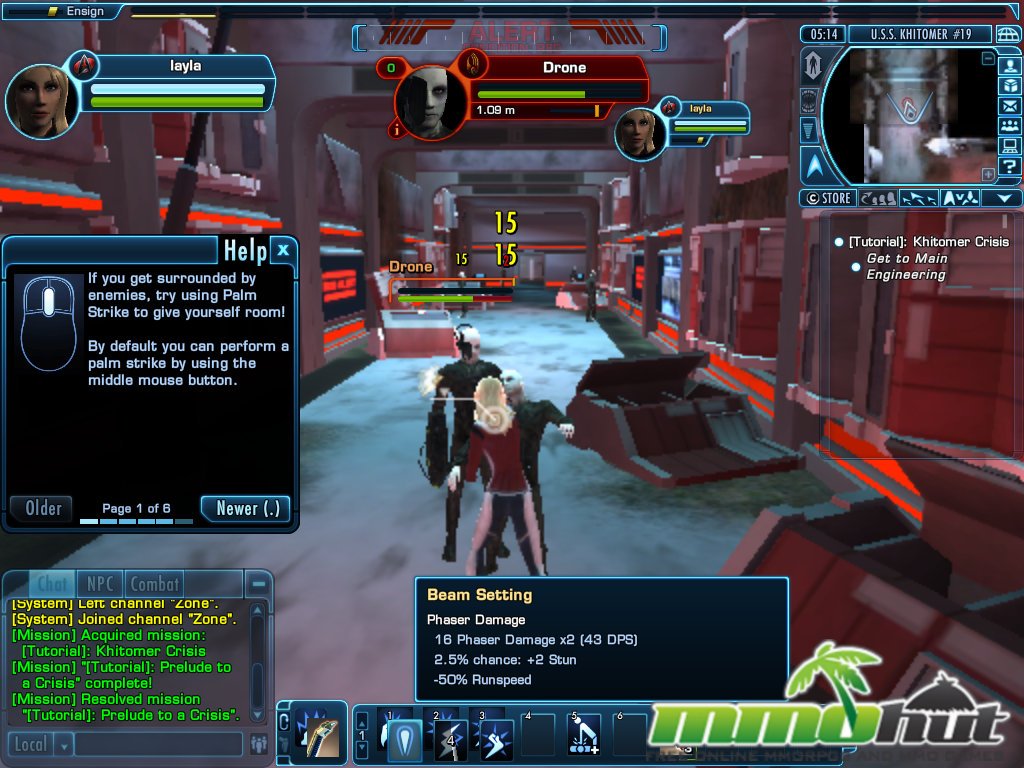 Although blasting enemies with photon phasers and battling other ships in space is fun the controls are a bit awkward. For general movement the standard WASD keys are used but to adjust the camera users have to click and hold the right mouse button. The game is sometimes buggy making maneuvering around space frustrating at times. Steering requires players to click and hold their right and left mouse buttons while using the throttle slider to increase speed. The map isn’t very user-friendly and players have to really search around for NPCs to access quests. For some odd reason, auto-walk doesn’t exist in the Final Frontier. There are also three modes of difficulty available for each mission. Players looking for more of a challenge can bypass normal and opt for advanced or elite mode before starting a task. Occasionally rare items and XP are rewarded for completing missions with a higher level of difficulty.

As players advance further the gameplay shifts to focuses on space combat and exploration similar to Dark Orbit. Players are constantly going back and forth between docked stations to complete a specific mission. Sometimes a commander has to venture out to a certain locale to beam survivors off a damaged ship or to attack a rival fleet. In between missions officers can participate in available PvP missions or matches. Unfortunately, STO has a relatively small community of players which can make finding worthy opponents to battle quite difficult. There are PvP free-for-all duels, capture the base, and faction wars pinning the Federation against the Klingons. At level 25 players can choose to join the Klingon Defense Force or stay part of the Federation. Special Klingon missions are also unlocked.

Comparable to Battlestar Galactica Online gamers enter a familiar world based off of their favorite television series. Lieutenants command their own crew and ship throughout the game. Crew members are made up of Tactical, Engineering, and Science NPC Officers. Each has their own set of skills and attributes that can be leveled up as the game progresses. The higher ranking the crew and advanced a ship is the better the odds of a victory during PvP battles. Strategy comes into play when selecting and customizing your ship. Each spacecraft offers something different. Escorts are loaded with extra Tactical Officers and firepower. Cruisers are massive ships and capable of taking large amounts of damage with grace. Science Vessels are equipped with sensors to identify enemies’ weaknesses and strike. The ship customization options are by far one of the best features in Star Trek Online. Players have hundreds of different themes, colors, designs, gadgets, and weapons to make their starship a force to be reckoned with. Choose sleek, utility, or future themed interiors. Select from a wide range of accent colors. Players with enough currency can purchase a Warship, Nomad, Brotherhood, Atlas, Chirurgeon, Temple, Gamma, Fellowship, or even a San Francisco style designed spacecraft. 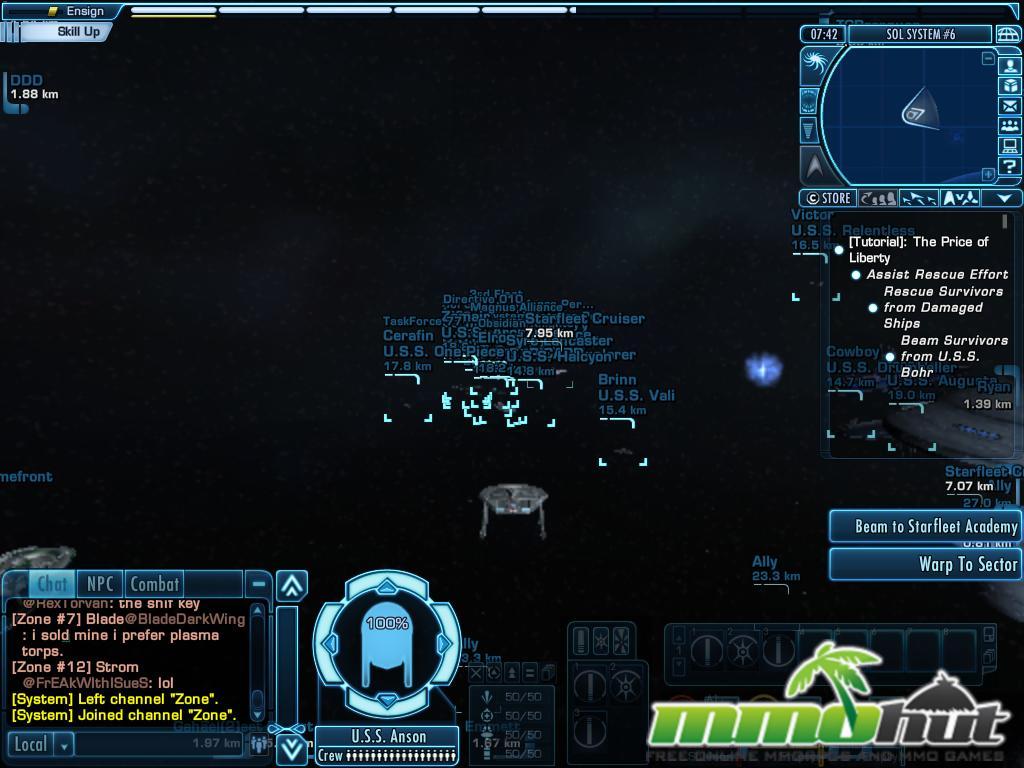 Previously a subscriber-only game, STO’s now free model is almost equal in quality for paying and free members. All users have unlimited access to missions, episodes, PvP modes, and events. Free or Silver Members are only limited in their chat access and the number of character slots. Players are able to fight on extraterrestrial terrain or in a tactical ship based faction war similar to Pirates of the Burning Sea. The cool theme of this game and innovative customization features like the character creation tool that allows players to create their own race makes it fun. Fans can boldly go where no gamer has gone before in this Star Trek themed MMO. It’s definitely worth checking out if you’re a trekkie or simply looking for a casual space game to play.