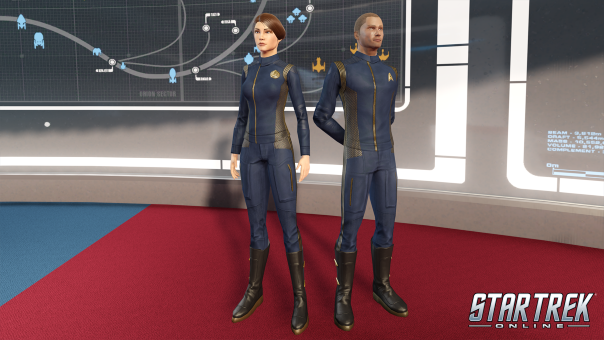 To commemorate the release of CBS’ new Star Trek series (Discovery), players can log in to Star Trek Online for a free Star Trek: Discovery uniform! In addition, Star Trek Online is celebrating 30 years of Star Trek: The Next Generation by offering captains a free Type-7 Shuttle and releasing a new TNG themed episode on consoles featuring LeVar Burton! From now til October 31 at 10:00 am PDT, console captains can claim these items in the Promotions tab of the C-Store on Xbox One/Playstation 4. PC players also have a second chance on the Discovery Uniform/Type-7 shuttle during this time.

Starting today, captains can log into Star Trek Online on Xbox One and PlayStation®4 to check out the new Star Trek: The Next Generation-themed featured episode, “Beyond the Nexus.” In this episode, players will team up with Starfleet Captain Geordi La Forge (LeVar Burton) to aid in rescuing the crew of a Galaxy-class ship under attack. Captains will also be able to purchase a new Galaxy-class interior, which served as home to Captain Picard and his crew during Star Trek: The Next Generation.

From now through November 9 at 10:00 am PDT, console captains between levels 50-60 can team up for the 5-player “Arena of Sompek” event. Rewards for participation include dilithium, marks, crafting material or the new ground weapon, the Sompek Pulsewave. In addition, Star Trek Online is holding a Champions of Sompek Contest which will grant powerful starships and rewards to the top three competing teams.