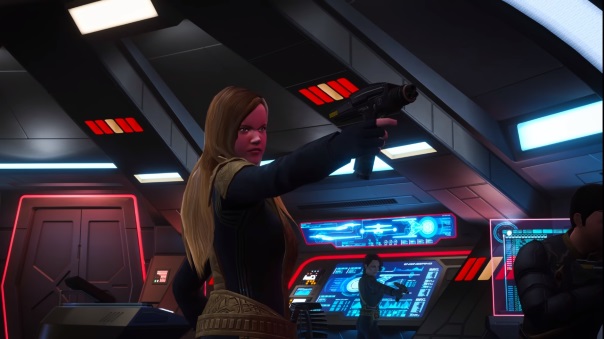 Though I’m still catching up on Star Trek Discovery, I took some time to go back through the Mirror of Discovery episode for Star Trek Online this weekend, to see how I felt about it, outside of grouping up with Colton to play it on Star Trek: The Worst Generation (our Let’s Play series for STO here on MMOHuts). As it turns out, I enjoyed playing these missions by myself too, and I think there’s a lot to like about them. Despite being decently powerful, I had a hard time getting through the second mission, Illusion of Communication. I seem to come across bugs in STO often, and I think I’ve finally figured out what’s doing it – skipping cutscenes! After I was done playing Mirror of Discovery, I went back to play some other missions, and wound up locking myself by skipping a cutscene. So I’m starting to think our issues recording is tied to that. Mirror of Discovery continues the Discovery content and is focused around the evil Captain Killy (an alternate universe version of Captain Tilly).

Whether or not Captain Killy actually shows up in Star Trek Discovery, I think it’s fascinating, and awesome that she appeared here first. She’s spoken of, but not represented – except in STO, which is a sound tie-in. On the note of Captain Killy, you know what I really like about her? She swears. I know that might be a weird thing to be glad about, and since I haven’t played all of the STO episodes yet, I could have missed out on other vulgar words. Something that turns me off about villains and characters, is a lack of realistic swearing. I know kids don’t need to see it, but few things take me out of a series when everyone “mutters an oath”, or says “Shucks, Darn” et cetera. I do know people who don’t swear, but they’re without a doubt in the minority. When someone who is reprehensibly evil like Captain Killy is upset, she called me and my crew assholes. This made sense, and I was happy to see it. From a storytelling perspective, I enjoyed this. I mean, she wasn’t wrong either – I did just foil her plan to basically annihilate a planet.

In Para Pacem, I really found myself confused for most of the time. We spent a lot of it blasting Klingons as well as Mutineers. The Klingons made sense – we were at war with the Klingon Empire. But were we not aware that Captain Killy was a villain? If so, why were we fighting her battle for her? That whole thing really perplexed me, and I wonder if watching more Discovery would have fixed that. Ultimately, the events of Para Pacem tie into Illusion of Communication, because it’s still at the planet Pahvo. We’re trying to get Captain Killy back to her own timeline, so she can stop doing horrific things in ours. Which ultimately means, she’ll go back to doing horrific stuff in her own timeline. No plan is perfect, I suppose. I imagine destroying her ship would do the job, but that’s probably not the Federation way.

I’m not entirely certain what Captain Killy was trying to do on Pahvo, but I know she was trying to take it over, at the very least. My money is on her destroying the planet. She had several Agonizers set up to torture and break the will of the Vulcans on planet Pahvo. So naturally, we had to disable those, so the people captive by Killy could get away. We maneuvered our way through the planet, putting down her allies and saving innocent lives, which was awesome. This led to a showdown with Killy, just her, me, her guards, and my away team. We had to contend with her, her evil doomsday machine, and her constant spawning minions. This is one of the hardest missions I’ve played in Star Trek Online yet, but that’s not a bad thing. I needed a challenge because I’ve been mowing through everything I’ve played so far. I also appreciate that Killy was absolutely willing to throw her ship away to escape. She leaves her crew to die in space, with the Federation/Whatever Faction you’re in gunning for it, and if we didn’t hail them, we’d have just destroyed them. Is she really gone? Or will we have to deal with her one more time? Personally, I’d like to see the next episode focus on COMMAND.