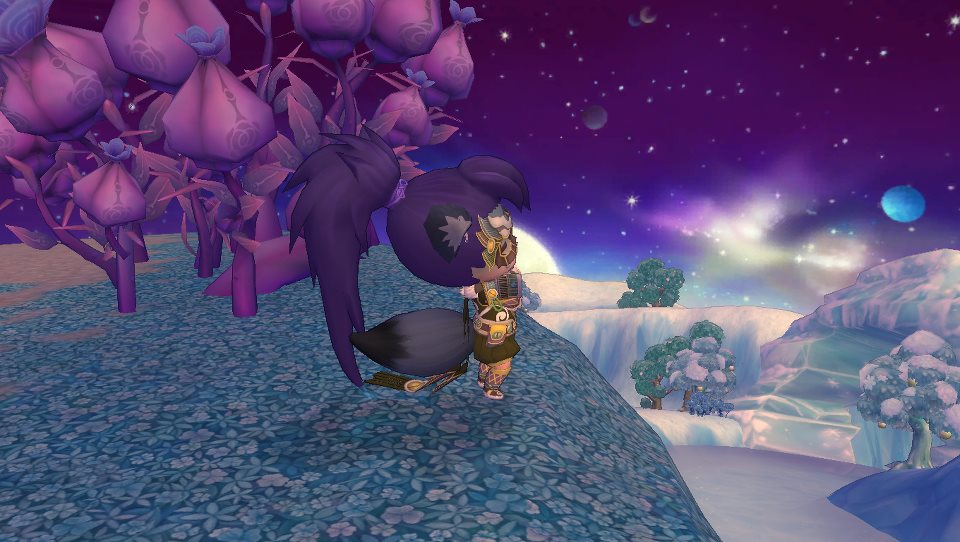 After browser titles such as Three Kingdoms Online and Dragon Born, KoramGame brings you at long last its first client game: Spirit Tales, a title boasting charming graphics, adorable characters, and a generally high production and artistic value. There is no doubt about it; Spirit Tales is a game that’s pleasing to the eye. This isn’t anything you haven’t seen before though, it’s a MMORPG with a set of classes, skill trees, leveling, quests, and it settles for doing this well. Despite some solid points however, you might want to read through this before deciding if this is the next game you want to spend your time and bandwidth on.

Spirit Tales definitely starts out with a bang; immediately off the login screen, the game looks very clean, polished and charming. With a warm color palette almost omnipresent, the whole experience couldn’t possibly make you anything else than warm in fuzzy. The character creator does a good job of showcasing the stylishness of each race and class, and gives a solid variety of options as far as customization goes. While there are quite a few races in-game, ranging from rabbit to insect people, it only lets you choose from a pool of three (Kirin, dragon, fox people), each which have their own selection of two classes, for a total of 8 overall. The differences aren’t all aesthetic, as each class is distinct, and has a feel of its own, though roles often blur. Each race has a sort of spirit form, essentially a sort of special transformation that enables you to not only do your job better, but also gain additional rewards for it. At this point, you can also check out the various emotes you can do in-game, to get an idea of your character in action (try them, they’re adorable). So far, so good! 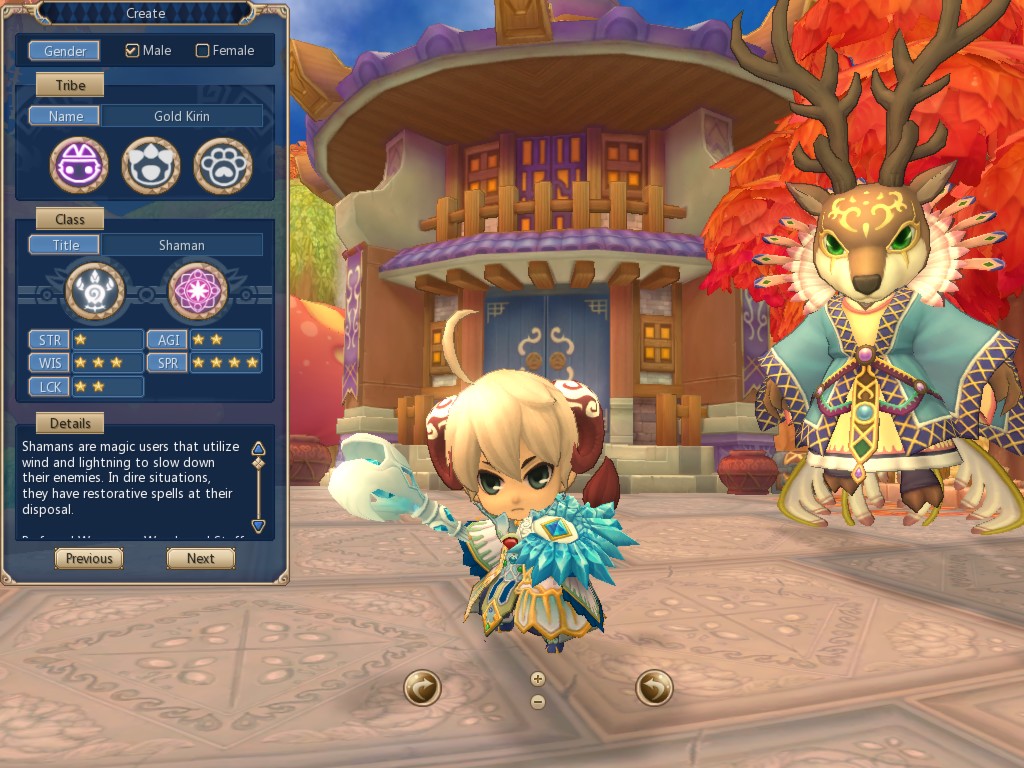 Once you’ve created your character, you’re shown a cinematic that explains the storyline, before being plunged straight into the… Well, the action I guess. Okay, it’s probably worth saying right away that once you get past the neat art, this plays exactly like a dozen other free-to-play games out there. There isn’t much in the way of a tutorial (barring some quick information screens), but it’s not at all complicated unless you’re entirely new to the genre. You start out along with all other races in a single starting town from which you grab a handful of quests, head out, bust a few heads, turn in your quests, level and eventually move on to the next town. There are no multiple starting zones here, just straightforward progression as far as the eye can see. Add to that the fact that the difficulty is quite low, and you’ve got a title that practically screams casual. The progression works itself in through items and a skill tree. Each combat ability you have is unlocked through a very limited skill tree, and by the end of the game, you’ll have barely enough of them to fill the handful of slots on your skill bar. You can specialize by adding more points in one skill than in another, and that’s about it.

Items do little to deviate from the monotony of questing gameplay, and though it is a neat trick to turn into a giant animal for some hefty bonuses, it’s only briefly entertaining before it becomes just another ability. There is very little in the way of PvP as of the writing of this, and many features concerning it or instances in general seem to be either absent, or very buggy. Spirit Tales does have some very interesting additional features, such as the pet system that lets you hatch eggs of various wandering critters. The resulting pet can then fight for you, level up and gain new abilities. This is an especially interesting feature when you consider the kind of critters you’ll be crossing throughout your adventures. There’s also the costume feature which lets you wear aesthetic items over your stat items, letting you looks exactly the way you want as you whack bad guys across the face. Unfortunately, due to the money store most likely intending to sell quite a few of these, they all have expiration timers, and they’re notoriously hard to find through in-game means. Not only that, but the money store, as of the writing of this, is somewhat lacking in items, though this will most likely be solved in a matter of months. 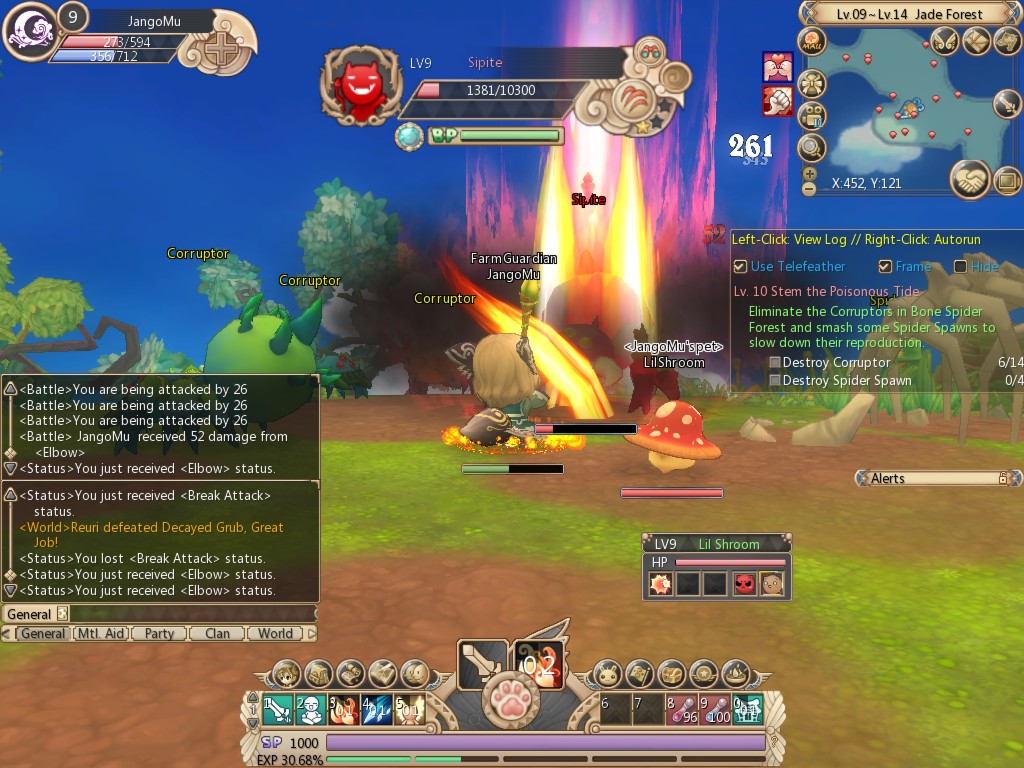 Spirit Tales does a few things extremely well, but on the other hand leaves a lot to be desired. This doesn’t mean that it’s a bad game however, and it’s certainly not trying to pretend to be something it’s not. It’s an experience that is meant to be casual and social. As such, players who enjoy the cuteness, the costumes and the pets will find here everything their heart desires, while gamers looking for challenge or a complex progression system will most likely be disappointed. All in all it’s a cute, adorable, light hearted game with a truckload of potential. Give this one a try!