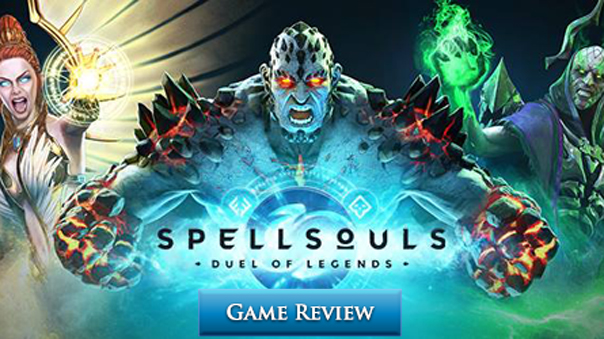 Spellsouls: Duel of the Legends is a free-to-play title for the iOS from Nordeus Ltd. The game combines gameplay elements from MOBA and Deck building games to create a unique “action packed” experience for the platform.

Spellsouls is currently in soft launch for iOS in select countries, with a global release planned later this year. 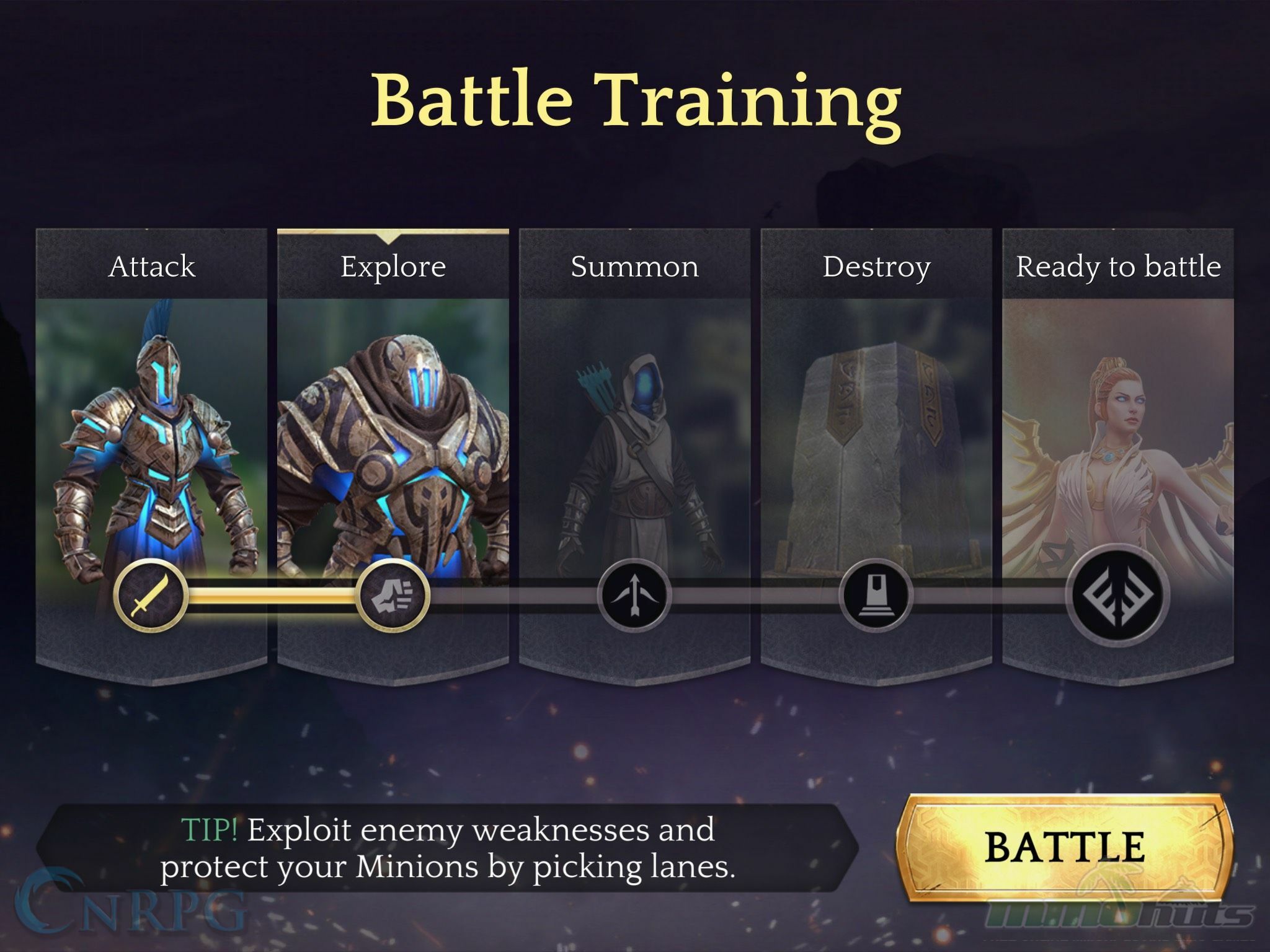 You likely won't need the full tutorial to understand the concepts of battle.

The game plays out in a straightforward field where two opposing teams face off. Each side summons a minion at intervals with the hopes of breaking the single turret defense from the two lanes in order to take down the opposing hero. The player who gets the opposing hero to zero health wins the match.

Unlike the typical MOBA gameplay where the player controls one hero in the field along with the summoned minions. Spellsouls has the player’s chosen hero stay stationary on their side of the camp. They need to release spells made up and drawn from the preconstructed decks prior to the battle. Your heroes generate mana as the battle rages on that would be payment for the spell’s cost. Spells also provide another game changing feature. Once you activate enough spells, your heroes can then summon more minions to the field along with their designated area of effect skill. But increasing spawn points get a cap also so you have to consider properly which of the three types of minions you’ll get.

The gameplay focuses then on unlocking spells per hero and leveling them up as you earn chests from battles ala Clash Royale. Your heroes also earn experience from these chests that require keys to be opened. You earn keys after a certain time has passed in-game. Or you can choose to purchase premium game currency gems and open the chests you earn. The chests also have a rarity system where the amount of spells you get increases depending on the rarity. You can earn a max cap of 3 chests before you are required to open them because you won’t be able to earn more from the battles you participate in. 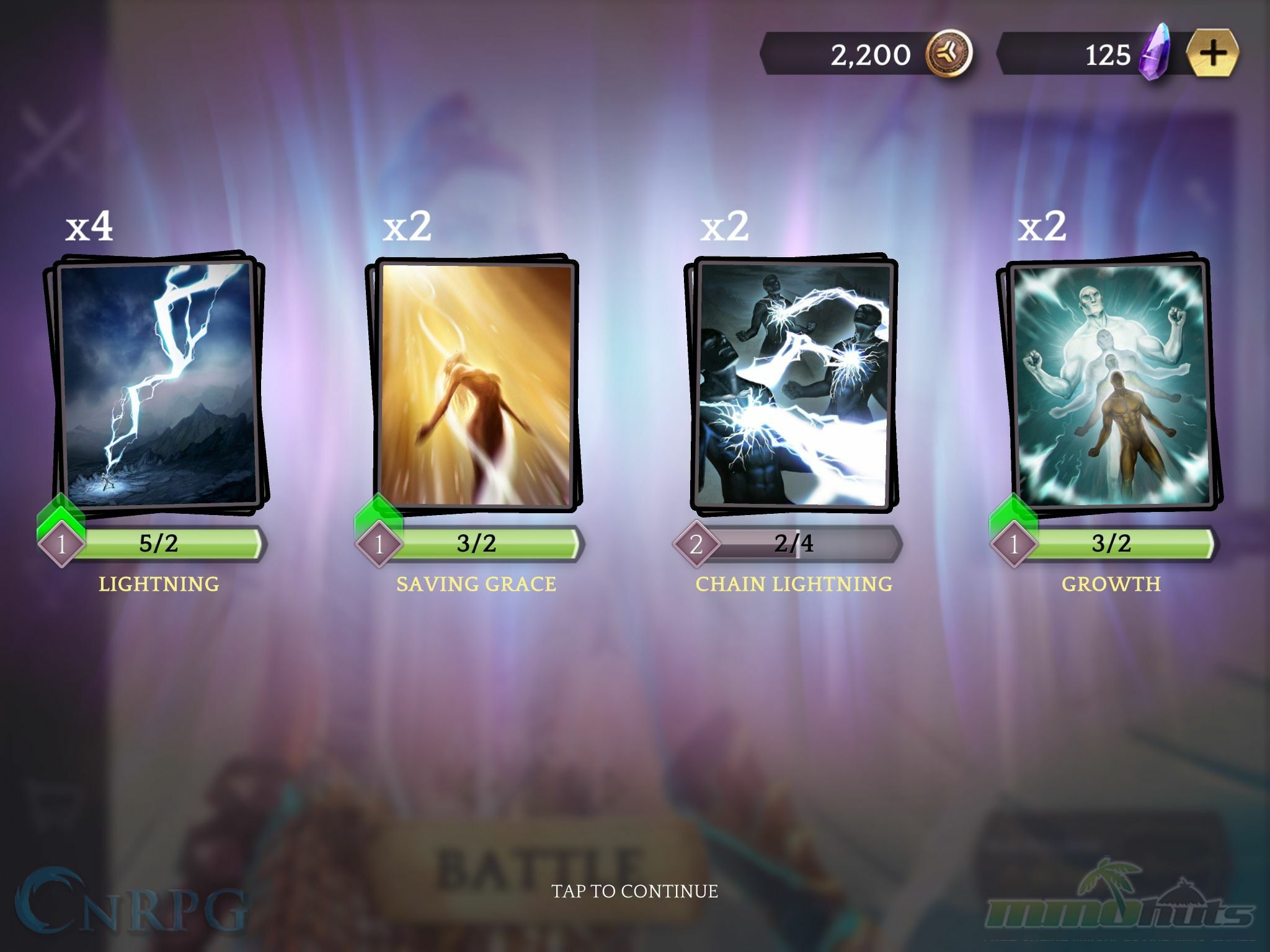 Spells are your primary form of impacting battle. The more you collect, the better your options.

Since Spellsouls focuses heavily on the spells your heroes dish out in-game, progression centers on earning chests through combat to unlock better cards. Or you get them through the in-game store. You can purchase either with gems or in-game currency at a higher cost.

Depending on the hero you choose, the spells you can bring on each hero’s deck are mostly activatable spells that target units instead of directly affecting the opposing hero. Each hero has their own unique gimmick much like heroes in Hearthstone so choosing your preferred hero all boils down to your preferred gameplay.

You can improve the spell effects by acquiring the same spell and using them as ingredients to level up the spell. The required amount of spells to get for leveling up the said spell also increases as the spell increases in level. 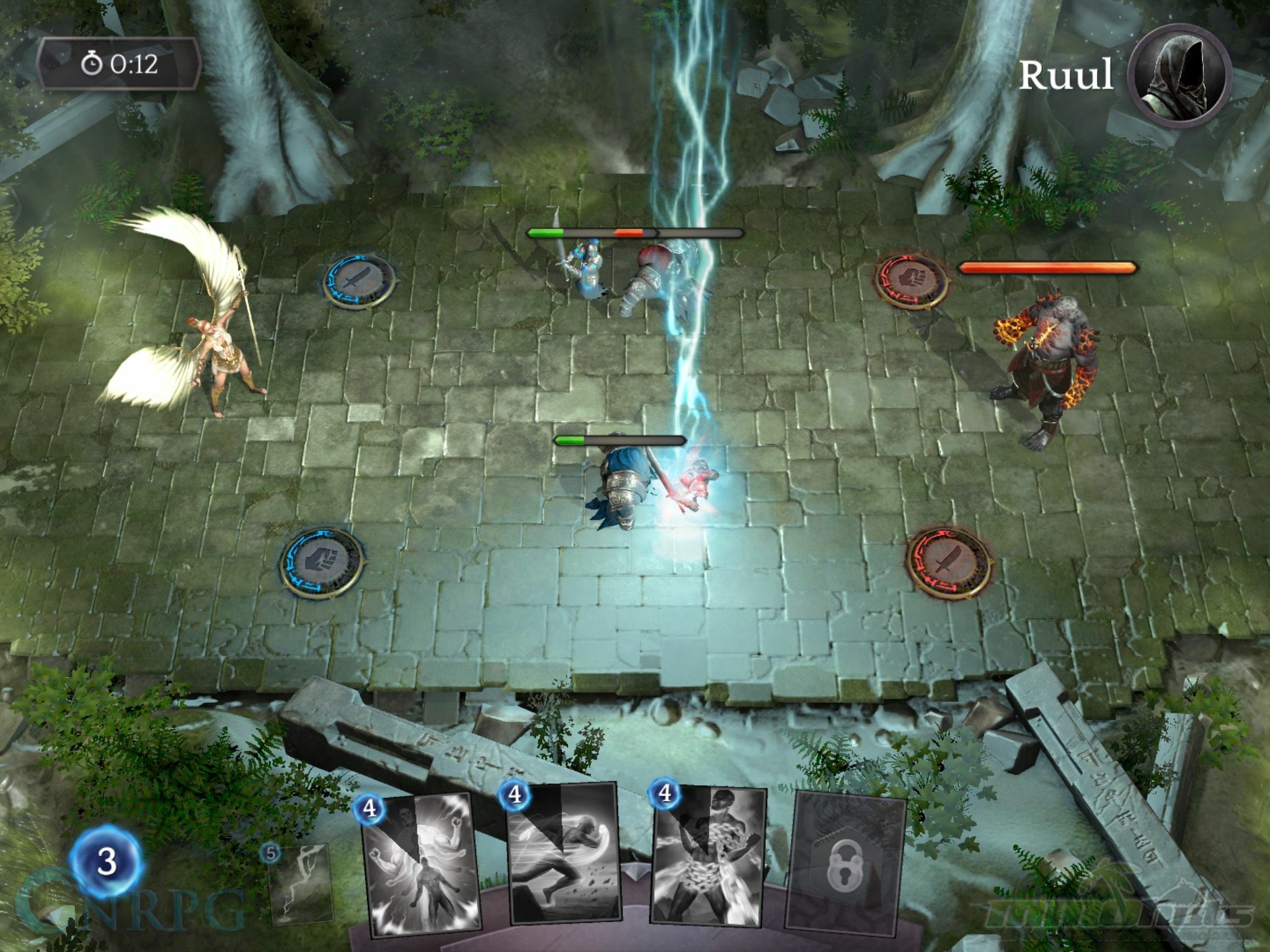 The core concepts may feel like Battle Royale, but it's a distinct game for sure.

While the game touts itself as a card based MOBA title, Spellsouls’ gameplay, deck building system, and even spell improvement has a ton of similarities from another title that doesn’t identify itself as one. And that’d be Clash Royale.

There are differences between Clash Royale and Spellsouls. The latter favoring, well, spells in the hero deck-building while generic minions are sent out unlike the former, where the minions and spells are mostly based on the deck you build. There’s an emphasis on the hero you choose in Spellsouls because they would dictate your overall gameplay. This is distinct from Clash where you get a generic hero and the deck mainly dictates the gameplay.

Another difference between the two, while minimal, is the field you’re battling at. In Royale, You have the freedom of where you put down your heroes. Spellsouls on the other hand doesn’t have that feature. And in fact Spellsouls limits your unit placement too. Another field related difference between Royale and Spellsouls is that in Royale the field also affects how the units react. In Royale, there are field chokepoints (the bridge) that would influence how your units move. Spellsouls on the other hand doesn’t have that. All you get is a vanilla field in battles.

That doesn’t mean however that battles are dull in Spellsouls. In fact the 1v1 battles are really intense and that you have to really pay attention to the timing and the proper activation of spells to maximize their use. You also need to even time in the rune activation because they can turn the tides of the game. I’ve had opportunities lost and games won when the opponent or I would be able to activate those AoE spells at the crucial moment. 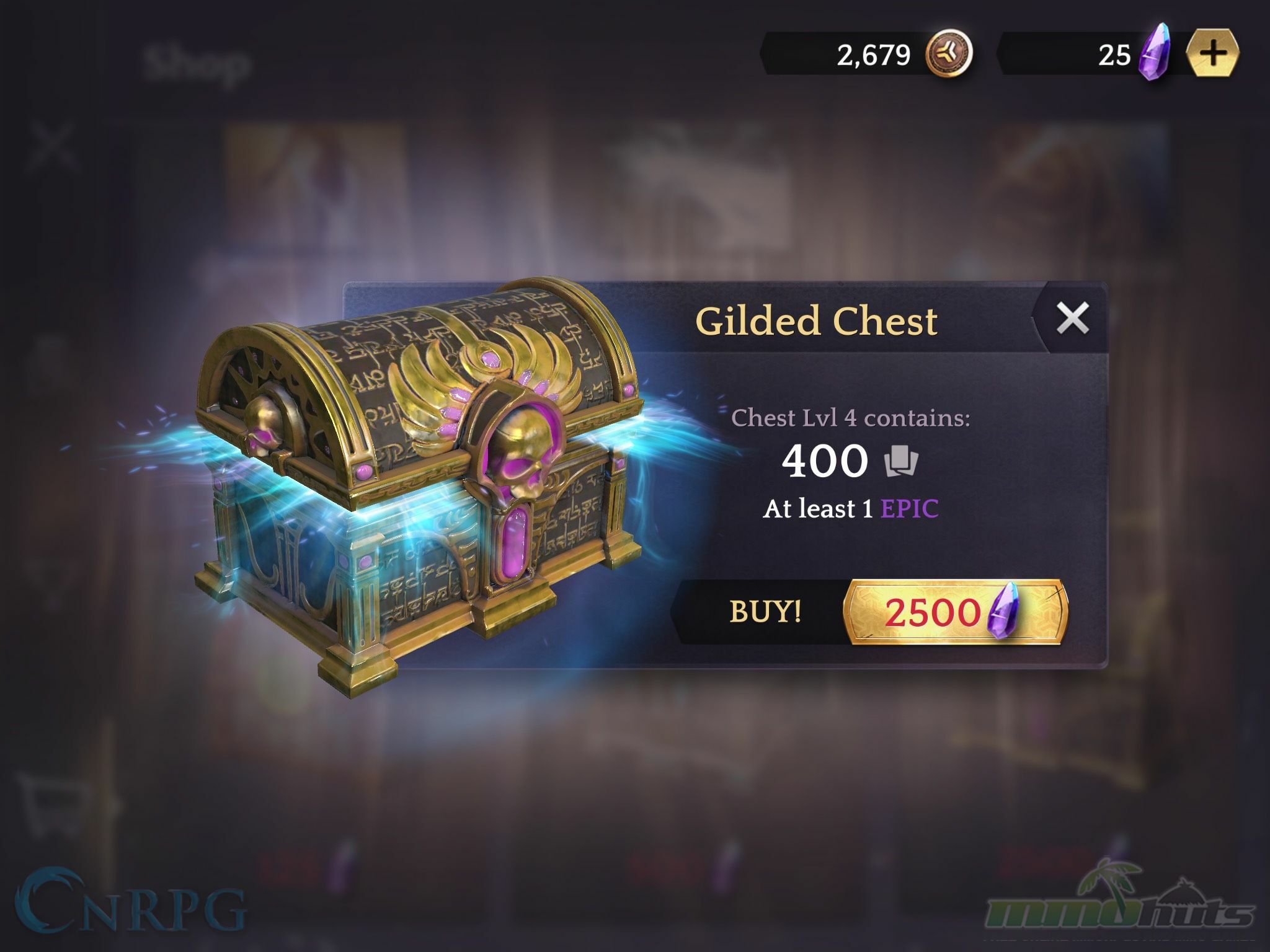 The chest mpnetization is what's really messing this game up.

Of course the game is without its fair share of issues. One of my biggest however is that the game pretty much requires you to spend money on it most especially if you want to play Spellsouls in long intervals. You can only earn a limited amount of keys. The keys earned cap at 5. With the chests capping at three, you are forced to use your keys even on the lower rarity chests you get. And to top it off, the higher rarity chests require more keys to unlock. So you are really hard pressed to spend if you want to clear your chest collection.

Another issue which stems from the chests is the way your account levels up. The game unlocks more heroes as you increase in level. What bums me out however is that you can only earn experience through the chests you open. So basically, your hands are tied from playing more matches if you don’t open your chest.

I wouldn’t have much issues with this system, because games require money to run. But what’s ridiculous is how many gems are required to open any kind of chest in game. Chests require a minimum of 30 gems to open. And it doesn’t matter if it’s the crap chest. They still cost 30 gems.

I must admit, however, that during my run I was unable to check the pricing of the gems to properly gauge if they are expensive or not. However, if this is going to be how Nordues is going to earn from the game, they better make sure that the gem bundles are a bang for the player’s buck.

I’m not saying that the game is in anyway boring or bad. Even with all the similarities with Clash Royale, Spellsouls’ gameplay system allows for real exciting matches. It also defines itself with the gameplay features that it stands out even in comparison to its more famous competitor. The only turn-off for the game is the high paywall players would have to invest to play the game for long intervals. Otherwise you best exercise patience as you wait for the keys to regenerate.

Even with the seemingly high paywall, Spellsouls is a title that is worth checking out.