SMITE: When to Play Ranked 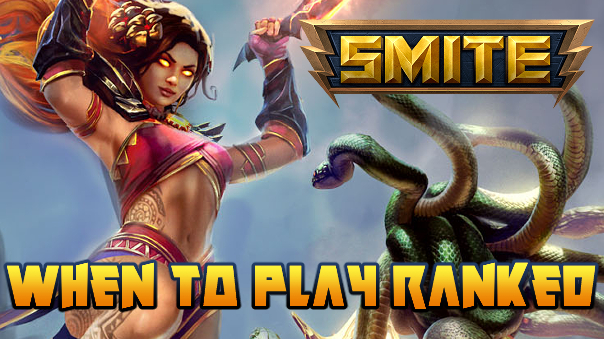 SMITE has a few options for Ranked gameplay, with Duel (1v1), Joust (3v3), and Conquest (5v5). Ultimately it depends on which style of game you prefer, but Conquest (5v5) is the most popular mode for Online Ranked in SMITE. It’s a very objective-heavy mode with the traditional 3-lane MOBA feel, complete with towers, side objectives, and a Titan to take down. Block out at least 40 minutes to play, but the matches can be as short as 15-20 minutes, or as long as an hour fifteen. Playing Ranked in SMITE is more than just logging in and clicking the Ranked button, especially if you have only played casual matches. It’s not hard, but it does require some knowledge and prep.

What do you need to know before going into Conquest?

It’s not advised that you go into SMITE Ranked if you only know one role well. Knowing more than one God will help too. Being a one-trick pony is very dangerous in Ranked, even if that god is seldom banned. So one of the first steps is being able to play several gods and several roles. You don’t have to be perfect at them, but understanding builds and a role’s job will benefit you as a player enormously. As a player in ranked, you should also know the optional objectives (Harpies, Buffs, Fire Giant, Demon). You ought to also know when to take them, and how important they are to succeed. You should also be aware of Picks and Bans, just in case you’re the first member of your team. The player at the top of pick order decides to bans for your team. So knowing who is powerful or dangerous is key. This can be remedied in part by keeping up with the meta but simply asking your team who is currently ban worthy helps.

Now that you know a few roles, what’s next?

As you grow and level up your account on the way to 30, I recommend playing a lot of Conquest on a casual basis. It’s very important to know what the game mode is, what the path to victory is, and to practice. Watch livestreamers who play Ranked, and even watch some old SMITE Pro Matches. But please bear in mind, when watching pros, this helpful advice: You are not Deathwalker. Just because you see a pro player on their personal stream try something silly, doesn’t mean it’s OP, easy, and you can/should do it as the first time in a ranked match. Please be aware that doing non-meta things without experience with it will most likely result in a negative experience. I would find players that tend to play the roles you want, do some research on what popular builds dictate, and why they work. The last thing you want in a heated game is to have to look up what item you need for a given situation. Ranked is work, and ranked is hard.  Experimentation in a game is great, but don’t experiment in a Ranked game. Another useful tip: Learn the VGS system. You don’t have to have it all memorized by game one, but know the important ones, and using them (without spamming them).

Always Remember: You Win and Lose as a Team

Some people lose sight of this, and figure since their role is to “carry”, that they are the only person on the team that matters. This is false. This is as much a mental facet of the game as it is a physical one. Dragging your team down for doing poorly will likely only cause them to do worse. If someone on your team is doing badly, help them! Either offer advice or help their lane/help them in fights. Don’t harass someone because they’re doing poorly. I know it’s revolutionary, but sometimes, players simply get outplayed. Even if you help them by placing wards around their lane, it will be more useful to achieving victory than swearing at them. Which leads me to the most important lesson: Once you have learned the power of wards, you are ready to play ranked. No matter what role you play on your team, it is everyone’s job to ward. Knowing where toward is just as important as doing it.

Know when to hold ‘em, and when to fold ‘em

I think one of the most important things about ranked is knowing when to quit. Sometimes you simply have to take a step back, take a deep breath, and play some normal matches, or do something else. For me personally, it’s two to three losses in a row, and it’s time to stop. Ranked Matches can take a long time (or can be 15-minute pubstomps), and losing over and over can certainly be soul-crushing. One lesson I’ve learned is to look back on these losses, examine the match, and figure out what you did wrong. It works in fighting games, and while on a team game, it might be less useful, it can make you a better player. You will almost always have different teammates, who will have differing strengths/weaknesses. But figuring out what you and what others did wrong can help in the long run. Even if you went 25-0-10, and your team lost, you are still at fault in some way. Perhaps you didn’t help your team and only focused on kills. The other major time when not to play is in bad weather/bad internet conditions. If your net keeps dropping, maybe it’s time to do something else as well.