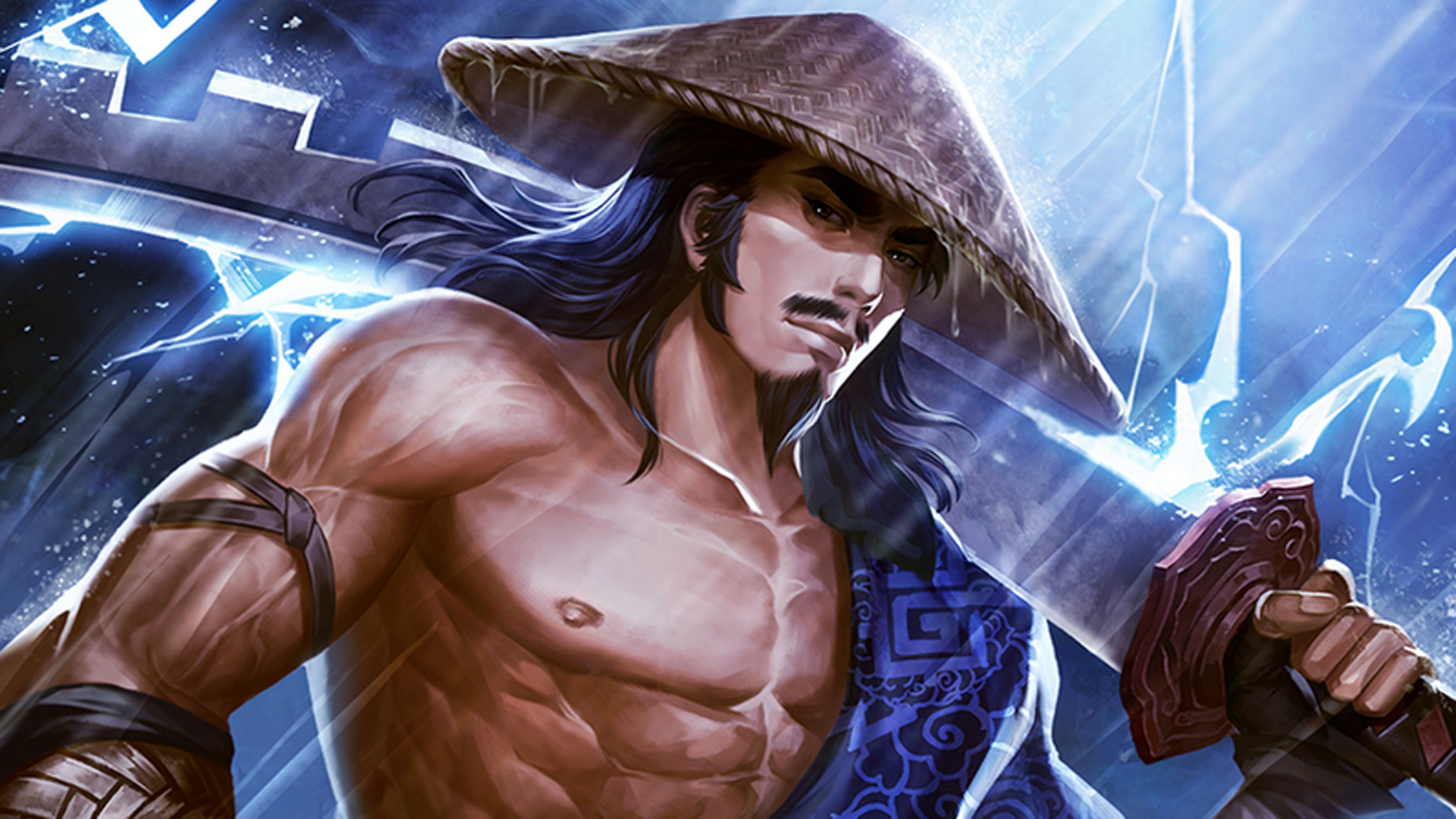 SMITE‘s Japanese Pantheon is still new, and the third God to make their appearance in it has made the biggest splash. Sibling to Amaterasu, he is the polar opposite of the serene Goddess. Wild, impetuous, and quite keen on destroying whatever happens to pester him. Izanagi might not have approved, and sent him to the Underworld, but I certainly do! The Slayer of Orochi and wielder of the Ten-Span Sword has a fantastic look and feel to him. There are a lot of little touches that I really appreciate in this assassin. His slouched, casual look as he rests his blade on his shoulder; it belies the difficulty that comes with him. He’s rated “Hard” and I can definitely agree with that. He has lots of pros to go with the difficulty though! Mastery of the Summer Storm can see you gliding in and out of combat at your leisure, destroying a God or Gods, and escaping with none being the wiser. Timing, and a wise approach will be the key to wielding Susano. Perhaps the biggest difficulty to mastering him though comes from an outside source. Season 3 has seen the Conquest jungle reworked and tweaked so many times, only a truly dedicated jungler has any idea what’s going on anymore. Learning a difficult assassin in such an ever changing environment isn’t advised for the casual player. I certainly don’t belong there on the conquest map, but thankfully Susano excels in any mode, weaving through the battleground of the gods like a hot knife through butter.

Mobility: Susano has two initiates/escapes, technically three! His ult pulls people into place and can be, in a pinch, used to get out of a sticky situation, utilizing its knock up and damage to stop a group of attackers in their tracks. The last “hit” of his third strike can be used as an escape, as well as popping his “3” [Jet Stream] and dipping out by hitting it again immediately. Don’t stop running! Hell, even his passive is a constant movement speed buff when you’re playing a spam happy with enough mana in your build. He can teleport in and out of combat just about whenever he wants, and that’s important to be aware of.

Stop There, Criminal Scum: His ability to control a crowd is second to none. His second ability, Wind Siphon will drag people who get caught into the center of the storm. There’s no limit on how many it can pull, so if you time it right you can set up a whole team for something nasty like a Scylla ulti! Put them into position, and then activate the ultimate to hold them long enough for your team to capitalize. Susano joins the likes of Ratatoskr in that he almost always picks the engagement. You have to pack some serious CC chain if you want to lock him down long enough for a surprise kill. Most of the time you’ll have to anticipate and counter his engage to trap this slippery monster.

Squishy: He’s an assassin, so he’s no tank. Getting an early defensive item will make it a bit less obvious, but no amount of defense will save you from poor play. This is not new for any assassin-style character, and his abilities are not cheap. If you do not manage your defensive stats and mana carefully, you might not have the mana to flee an unfortunate situation.

Damage: When he gets closer to the mid-late game, he’s a nightmare – a whirling dervish of destruction and pain. But when the game starts, he’s not really that much of a threat other than he still has CC pretty much right out of the gate. I did not feel like his damage was very great until later in the game, but that might be my build choice more so than the god.

Susano is an Assassin, so he calls the jungle his home by default. Popping out of the wilderness, catching people from behind or by surprise, he’s definitely good at that. I can also see him being very powerful in the solo lane, if the other enemy does not have a lot of strong poke damage, or is squishy like himself. Then it comes down to who is more mobile and who has the skill. Against tanks, it will be an uphill battle until he’s got some armor penetration or the superior damage. Until then, he just slowly farms, and waits until momentum snowballs. Speaking of which, you have to stay moving at all times for best results. Even if your passive is off cooldown I’d keep moving. Being where the enemy doesn’t expect you to be is his whole gambit. Taking Swiftness or Teleport as relics is all the better to keep them guessing. Especially if he’s in lane, he could land a kill, sneak into the jungle where he can’t be seen, and teleport elsewhere to help the Hunter lane get a kill or two! However. . . his cooldowns are on the long side, so I’d be careful in lane. That would be something I reserve for a lot of practice. But he shines in a position where people can’t escape and he can. The jungle, Joust, even Arena. But do be aware that even if he throws his Storm over a wall to leap, he can’t. The Jet Stream can’t be fired through walls, but if you fire around a wall and move to safety, he can teleport that way. You have three seconds to make the move, so be aware. But what can he really do?

Passive: Swift as the Summer Storm: For every ability on cooldown, Susano gains movement speed. [4% per ability] This is one of the best ways to get in and out of combat, and the more Ham he went, the easier it can potentially be to escape.

Action 1: Storm Kata: A pretty unique move, Susano makes three quick strikes, activated by hitting left click again. Each is different. First is a cone, second is a circle around him, the third does no damage, but is a dash. The damage is pretty strong, but it does get +90% of his Physical Damage, so the longer the game goes on, the harder it will be to ignore. There are clever things to do with this though…

Action 2: Wind Siphon: As the God of the Summer Storm, Susano throws a cone of wind in front of him. Enemies in the heart of the storm [marked by the UI] will be pulled towards him; the ones outside the center take damage but do not get moved. Not a hard hitter, but definitely a lovely move to position your prey, or prevent someone from escaping.

Action 3: Jet Stream: Susano throws a little storm cloud that attaches to an enemy or minion. If it whiffs, it will stay hovering in the air, crackling ominously. It does damage over time and within 3 seconds you can teleport directly to that cloud. You can use it to engage, to secure a kill, or to escape if you’re fast enough. If you teleport to the Enemy, the cooldown is reduced by 6 seconds, which is handy to use again.

Action 4: Typhoon: Susano creates a humongous hurricane on his location, and any enemies within get pulled to the center. It grows to double its size, at which time it will knock up anyone within and deal them damage. Or you can activate it early, and whatever direction he’s facing it will move, knocking up opponents in its path. It’s an amazing ultimate, feeling particularly mage like for an assassin. Whether you want to escape, initiate [again, notice a trend?], pull enemies into position, or keep a winning fight going for an extra slap around round with your Action 1, Typhoon is there to serve your needs. Then you walk away like a big shot when they get popped into the air, because Cool Guys don’t look at explosions. Or you just do enough damage to kill them and hit [VVGG].

Personally, as far as maxing abilities goes, I focus 4, 1, 2, 3. Storm Kata’s damage goes up as you increase ranks, and his ultimate is always good. Jet Stream I focus last because if you land it, the cooldown drop and the damage on it isn’t that relevant. Thus, I want to be hitting the Storm Kata as fast as possible so I can blast people with sudden and relevant damage. His builds between Arena and Standard games are pretty similar. Your core items: Jotuun’s Wrath, Heartseeker, Warrior’s Tabi. From there you build around certain needs. Relic Choices are pretty standard: Sanctuary, Purification, Sprint, and Curse. These are all fantastic, depending on team comp vs. how hard you want to go into a fight. Damage Items I narrow down to Stone Cutting Sword [Phys Power and Move Speed; no contest], Brawler’s Beatstick [Phys Power and Penetration] or Titan’s Bane [Phys Power, all AAs get Penetration]. All of these are great choices, but personally I want penetration, unless there are no tanks in my way. Then I just go deep pen and damage. The just reworked Bloodforge is godly on him, but I’m afraid to become partial to it as there’s just no way that item is going to stay that strong through the next few patches.

Defensive items… my favorite item is Bulwark of Hope, for the damage shield. When I go in, I go all the way; if I decide I made a poor life decision, I can run away and hope the shield will keep me alive! The MR and -20% CC is just icing on the cake. If I’m really ahead, I like Mail of Renewal though. The health/mana back on kills and assists allows me to stay around and bully people just that much longer. You can’t go wrong with Magi’s Blessing late game when a single CC can be a death sentence. I tend to only grab one or two [at MOST] defensive items. Any more and you will be hitting like a butterfly.

Susano excels in being able to get in and out with great speed and deal plenty of damage. The big piece of his kit, other than his Jet Stream to dive, is the Storm Kata. It’s very important to note that you have a full three seconds between each move to reposition, and prepare the next part of the move. You can also cancel it if you want to land a few basic attacks between patterns before resuming the next piece of the skill. So with enough attack speed you can Activate, cancel, swing, activate, Wind Siphon, dash. You can do truly crazy things and maneuver around people before they even know how to react. Use that time to your advantage and only use the parts of the Kata you need when you need. If you wait too long, the move resets and goes on cooldown though, cutting out your most surefire escape. I feel genuinely that Susano is the strongest member of the Japanese pantheon yet, but I think he has more synergy with Amaterasu than Raijin. The stun from Amaterasu leading into Susano can be infuriating and deadly. Any Gods with heavy CC kits will be his best friend or worst enemy, depending on what side of the fence they’re on. Susano may look relaxed and calm, but dwelling in him is a burning rage, and it’s up to you to channel it through the blade and into the guts of your foes!