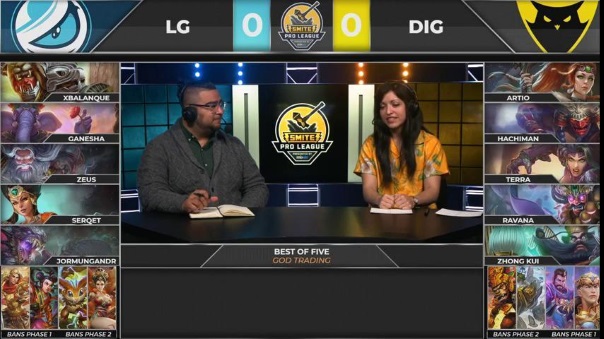 I chose EU vs. LG this week for the Smite Pro League because this will show how Dignitas handles a weaker team like Luminosity. Honestly, I like LG. I didn’t bet on them being the worst team in the SPL yet, but they definitely had a tall task in Dignitas to deal with today. Dignitas is a team that knows exactly what to do at just about all facets of a game. They’re good at picking up objectives, and their only big weakness is their hubris, and that’s what gave LG that first win. This isn’t to say that LG is bad, but Dignitas outplay just about every team they come across. Also: Lazy Backs are bad. Please don’t do this. LG has a lot of room to grow, and I don’t think they’re the bottom of the SPL barrel. That’s probably Trifecta or SK right now (sorry guys! I still think you’re great!), and I like what LG is bringing to the table. They just have to know when to do something wild, and when to fall back and do something reliable.

Their comp in the fourth game was sound, but the weird starts? Nah, that only really helped Zhong Kui, and only moderately. The rotating strat just did not work. It was a great idea, and what better time to try something wild than the start of the season? LG needs to avoid tilting, and need to work on their synergy. The big takeaway is that Dignitas is not invincible. When they don’t respect their opponents enough, they drop games. I think Dig needs to work on their ego just a little bit. They’re amazingly skilled, but don’t look past teams ever. Luminosity’s comps don’t always make sense, but they kept trying for late-game comps and it simply was not working. I think LG probably learned a lot from this match though. It’s pretty clear to me that Dignitas learned because they handily won most of these matches post game one.

The more I think about it, this match was just Dignitas underestimating Luminosity. Perhaps they were sandbagging? I just have to guess. I missed most of the first game of Dig vs. LG, but man, did I tune in at the right time! Right at the end, Jormungandr set up that last teamfight, and it came down to a base race! LG had the team and the big time damage, obliterating Dignitas in their base and getting their Titan too. Whew. That was brutal. Jormungandr, Zeus, and Ganesha on the same team? That is a disgusting teamfight, where you have no choice but to get stuck in their dumb shenanigans. Jorm is slapping his giant body around, Zeus has tons of AOE! Mollusk saved that base race for their team though, pushing back the lone Dig member diving the enemy Titan.

As Game Two begins, I will say that Dig was smart to ban out Xbal and Zeus immediately. LG banned Arthur and Achilles first, also very smart bans. Chronos?! Guan Yu?! They’re not bad, but first pick? That’s wild. But more Jormungandr, that’s beautiful. Xaliea’s Jorm is ferocious. Everyone’s getting slowed by LG. One thing I love about LG is how wild their drafts are, and this one’s proof of that. Dignitas has a very traditional draft, they’re going to go with what works for them, banned out what beat them. LG just went for something wild and different. I have to say, Sun Wukong mid was a really wild pick. That’s the thing about LG – their drafts seldom make sense to anyone but them. But it can come back to bite them.

Jormungandr vs. Terra in the solo lane made me think I need to really start playing more Guardians in the solo role. This is giving me hope that I can expand my abilities in Conquest. But Dig played very hard this match, probably salty that they threw the first game in the dumpster. Dignitas pulled ahead though, in kills and gold. LG’s ultra-late game comp might be coming back to bite them though. Dignitas has strength early, thanks to Hun Batz, Merlin and Ne Zha, and their comp is able to pick people off pretty efficiently. LG’s not too far behind, despite being down six kills though. But at 16 minutes or so, the first towers fall, both in the solo lane.

The important thing for LG is to not tilt, and not get overwhelmed with their weaker start. Dignitas haven’t pushed too hard for major objectives, so it made me wonder if that’s what happened last game.  21 minute Fire Giant went to Dignitas. LG tried to respond at Harpy, but it didn’t work at first. A heated battle followed and a Fear No Evil from Hun Batz paid dividends. Oof. a 4-0 fight, and knock down mid lane, and mid-Phoenix. As soon as Dig got Fire Giant it was absolutely over for the next several moments, LG crumbled under the might of Dig. But it’s not over yet.

At 23 minutes, it’s 11-1 and man. This is rough. I still think LG could come back, but it’s really going to take some pro plays. Sun Wukong did not work in mid, but I still like the potential. Could it be they forgot to trade/trade glitched? I could definitely believe that. Every time I say that Dig does something bigger, so I guess my faith is misplaced. As I’m typing this, Dig just push into the Titan, ignore LG, and just bash him in the face. QvoFred was a mighty force in this match, bullying and bodying everywhere he went. Who needs to get banned in this next game? I think it’s Hun Batz. Qvo’s Hun Batz never seems to miss the right place for Fear no Evil. Merlin should also be banned (or picked first). Qvo and Trixtank also went unkilled that whole match and were always in the right place.

The second ban pick for both teams is so important and so terrifying. If you ban out the wrong gods, you can ruin the whole game potentially. Merlin and Arthur both were banned out, so I wonder if Hun will see an early pick. Dignitas continued to look towards those jungle team fights – Ah Puch to force people to fight in that horrible AOE ult, Ne Zha to take someone out, as soon as they round a corner. Meanwhile, LG continues their meme picks and troll choices, but Xbal is great at denying communication, and Kuzenbo can make those big combo hits from Dig pay for it. I’m admittedly confused on Dig’s Hun/Rav bans. They banned out some Qvo picks! Is it to prevent LG from taking them? LG’s picks continue to make me happy. Nu Wa and Bastet, where Dig picked Fenrir and Rama! Dig continue their safe picks.

Alas, Nene! He led to Kuzenbo’s death, thanks to Ring Toss. That was an incredible reaction on Dig’s part. LG gets on the board at 4 minutes, but lose three total gods for it, so it wasn’t really worth it. I sincerely enjoy what LG does, but I do think their picks/bans could use some work. I like chaotic picks, but the bans maybe not so much. Maybe fewer late-game comps. Dig was playing aggressive, and slowly but surely, LG get back at them for it, but it’s not all roses. Rama building a little lifesteal nailed all three shots and gets away free. Ataraxia looked like he didn’t even aim, he just zapped his foe from the heavens. Dig got back on track, picking off one, then another, and on top of that a second Fury (Oni), so now their lane pressure is stronger. I think LG’s not working together enough and it shows. They’re being picked off one at a time, but at least Joshy got the Tier 2 tower, while Dig gets Fire Giant. Kiki tried to steal it, but he could just not get close enough. Though the next fight was interesting. Dignitas dove hard, but LG pushed them away, get a few kills, and make Dig pay for their greed. But is it enough?

Trixtank gets slapped into the middle of LG’s team, but still manages to get out somehow! It wasn’t enough, the teams are split into two squads, and Dig get the deicide! They’re too far away from base though, so instead, they get Primal Fury. They do admittedly go onto push towers because LG isn’t strong enough to do anything about it (and Xalea/Joshy were still dead). While Dig is still very much in the lead, one thing I think Dignitas is bad at is finding the right time to be aggressive. Most of their misplays are built around how aggressive they are, but at this point, it might be too late for LG to come back. If they could win a Fire Giant fight, then perhaps. But instead, Dig zones them out, and gets it for free.

A 2 for 2 fight happens at the right side Phoenix for LG, but then Hurriwind gets a double after, making it 4-2, and claim the Phoenix of LG. Somehow Dig hasn’t won yet, but they do have a near 20k gold lead at 28 minutes. It’s 21-10, and all LG has left are Phoenixes. Fire Giant’s almost up, and it looks like Dig will get it without a contest, again. Just like that, Enhanced Fire Giant acquired. Dignitas rotated to the left side, get a 5-2 fight, and Phoenix has perished. Kiki’s back, and it’s up to him to defend! It wasn’t enough to stop mid-Phoenix from dying though. Against all odds, LG pushes back Dignitas yet again. I don’t really understand how, but if they keep this up, LG might actually come back. LG’s Sisyphus pushing the boulder, but I believe in them. Dignitas is undeterred and picked up yet another Fire Giant.

Hinduman made a great point concerning Oceans. He needs to play someone he can be aggressive with – Nu Wa is not aggressive enough. Let him play something mighty and violent! I agree though, he’s not making a big impact as a more passive god. It was just a matter of time this game, Dig claim game 3 (2-1). LG in “Game Three” went early game nonsense (LG) and Late Game Nonsense (Lookin’ at you Kali). I’m just glad to see Khepri, I think he’s good. In dire need of buffs, but still a lot of fun, and useful in a teamfight. It does look like LG was bullying the lanes early on. Zhong and Cama in the solo lane is such an interesting battle. Both of them have solid sustain, but I think Zhong has the better burst though. Wait though! Cernunnos is in mid! Joshy snakes First Blood, Variety wasn’t able to stop Kiki and Joshy at once.

However, Ataraxia comes out of nowhere to snipe Xaliea, and Variety almost died again at the same time. Man, Joshy and Kiki are bullying Variety’s Camazotz. It’s not a major lead, and Cama has more exp, but I still think it’s a better look for LG. It doesn’t last, because of Dig bully LG under the tower, and just like that, a lead has been secured. LG secured a kill, and Ataraxia was trampling his way through a tower. Joshy rotated over to defend, but he almost didn’t get there in time. I like the swap strat LG’s using, where they do lots of wacky swaps/rotations, but it’s not working on Dig. They aren’t fooled. LG is getting back in, thanks to getting another tower (almost two). LG’s not really that far behind. But Ataraxia’s level 18! He’s closing in on a full build at 18 minutes, and that is repulsive. Nobody has really stopped Ataraxia from free-farming towers and minions. A brutal fight in the mid lane score Dignitas a nice easy Fire Giant.