SMITE – How to Play Ares 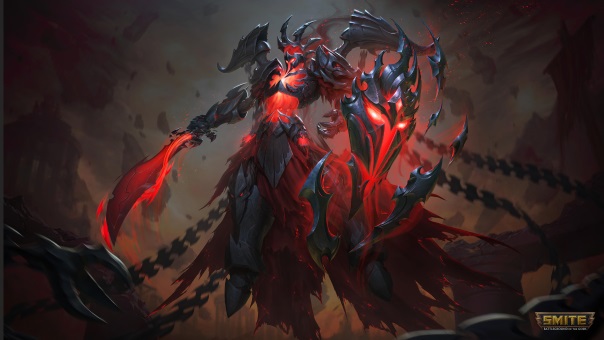 I know that’s a pretty bold claim, but hear me out: Ares is actually the best Guardian in SMITE. There isn’t another Guardian that I can think of where the entire team has to reconsider picks, bans, and item purchases just because one God was picked. If the other team has Guardians, Beads are typically considered so you can get out of whatever CC they hit you with, but with Ares? It’s an absolute must to have an out, whether it’s an ability or Beads because he can drag the entire enemy team into whatever nonsense his side has planned. Your team will probably have huge AOE damage ultimates (Poseidon, Zeus, Odin, Hou Yi, et cetera) and the set up is incredibly easy. But Ares can also be the ol’ bait and switch! You lock in Ares, the other side burns all of their beads to evade his ult, then your squad shows up with something else they should have popped beads on – say, Baron Samedi, Poseidon’s cripple puddle, or any other assortment of awful, terrible CC/damage abilities. Sure, some Guardians can pop one or two beads, but all five? Not too many can say the same.

It’s been asked of me repeatedly to go back and do god reviews of gods that were before my time, and what better role than a guardian, and what better god than my personal favorite? So I’m going to focus on Ares, the God of War today! Ares is not loved by the people, nor is he loved by his foes. Hell, he’s not really loved by the people on his side either! Except perhaps the Spartans, for his masculinity, his warrior spirit, and his physical perfection. He is fickle and cruel, and the chains that he binds his foes with are to be feared. Those bound to him cannot escape and have no choice but to endure the wrath of the God of War. He’s not the greatest or even the hardest god to play, and it can feel deflating to constantly get nobody with his ultimate, because of Beads/Invulnerability moves, but take heart – you did something very important for your team. When playing Ares, you need to be brave and be willing to take incredible risks, like diving into the middle of their team. As far as skill priority goes, I tend to balance them fairly, but I put points further into Shackles if I’m landing them, or Searing Flesh if I’m doing worse.

1st Ability: Shackles (Line, Damage, CC): Ares launches a chain from his shield, damaging anything hit by it. Should a god be hit, it shackles them to Ares and Cripples them (preventing Movement abilities), deals damage every second, slows them, and buffs Ares (15% Slow/Speed buff per chain). If the chain hits a god, he can also launch another chain for free within 2 seconds (maximum of 3 chains fired). This can also be fired through walls. Minion Damage: 70/90/110/130/150+15% of Magical Power God Damage Per Tick: 25/45/65/85/105+15% of Magical Power. Cooldown: 15s

3rd Ability: Searing Flesh (Cone, Damage): Ares releases a mighty gout of flame from within his shield, causing damage every .5 seconds, for 4 seconds. Ares is immune to knockbacks during this time. This ability also knocks back enemy minions. Damage Per Tick: 15/20/25/30/35+7% of Magical Power % Max Health Per Tick: 1/1/2/2/3% Cooldown: 12s

4th Ability: No Escape (Area, CC, Damage): Ares wields his chains around him in a circle, snaring all enemy gods hit by them. After 2.5s, all gods snared are pulled to him, taking damage and also being Stunned for 1s. This can also hit gods through walls, and he’s immune to crowd control during this, and can also move while channeling. Damage: 200/275/350/425/500+40% of Magical Power. Cooldown: 100s

Time To Play The Game: The game of Buying Beads, that is! Beads are always a great item, but they’re practically a must against Ares. Did you want to get that early game Swift, Horrific, or Shell to protect your team/set up kills? No, you didn’t, you wanted to buy Beads, and that’s what you’re gonna do. The other team, Ares team? They’re going to have Shell, Aegis, all that good stuff. But not your side. You need that early game Beads, or you’re just going to get snatched up every single time, and brought to the chain party.

Damage For Nothin’, Ganks for Free: Simply by building Ares the way he’s intended to be, you’re rewarded with free damage, that grows as the game goes on. Even better in Conquest now, you can throw your boots away in the late game for yet another Aura item! Plus, there are so many to choose from, there’s no way you can possibly do it wrong. There are non-aura items I do pick up, but we’ll cross that bridge when we get to it. Want to play damage Ares? It’s easier than you think.

Disappointing Sans Communication: Ares isn’t great with every team comp. He’s great on his own, but if your team’s not wise to what he can do, they’re just going to pick dumb things that don’t work together. While your opponents have to reconsider what they pick when you lock down Ares, your team should definitely do the same. If they don’t, prepare to be sad when you ult, snatch up a whole team and they have no idea what to do next other than watch you die.

Not A Lot of Peel: Sure, his chains can cripple, and his ult can pull people in, but other than that, he’s got no real hard peel for his team. That’s one of the most important things a Guardian can do: Peel for his team. Warriors can do it, most Guardians can do it, but Ares’ peel is incredibly situational. Ares has to nail all his chains, and then body block and hope for the best. When I have Ares on a serious team, I want another Guardian with him to pick up what he lacks, or a Warrior with peel.

Ares is an incredibly aggressive Guardian, but people know exactly what he does, it’s not rocket science. His presence in the lane is a chore to deal with, and he can stop ganks with perfectly placed chains. His chains cause a cripple and prevent movement abilities, so once you’ve mastered landing chains on multiple gods, he can really set up fantastic kills without having to rely on his ultimate. But that’s the best thing he has, that damned ultimate. The great thing about those chains too, is that landing them increases his movement speed while also slowing his target. So if you land them on say, the enemy Guardian and Carry, you can run up when your jungler/mage are coming and set up a free kill with your ultimate (or just hold it for later). In fact, I’d argue that his 1 is probably more important than his 4 overall. Someone rotate to your lane and decide not too? Hit them with 1 and follow them!

His 2, while a great buff for both minions and gods, it can’t hurt to hold it a little longer. It grows in strength while chains are in play, so while it might be fun to pop 2, run in and then start throwing chains, be patient! It will be rewarded, provided you don’t miss. Not to mention, Ares doesn’t have to be played in the Duo Lane. His build and kit work just as well in the Duo Lane, and you still don’t have to build all regular Mage Gear. You can still go with Aura Items for the long-haul. You still gain Magic Power from them, and ultimately still benefit your team with Protection/Damage Auras. Consider carefully what your team needs, find the right Aura item, and snatch it up. But just because he gains Power per Aura Item, that doesn’t mean that’s all you should build on him. There are tons of great items that might not have Auras but have incredible uses. Gem of Isolation’s a great mid game item – now all of your abilities slow, in addition to whatever else they do! Except your 2, of course.

Breastplate of Valor is another prime example. It gives CDR but is not an Aura Item. This is a great piece for him because CDR is King. The more often he can pop abilities, the better off he’ll be. Another non-aura item (that’s a non-tank item) is the Ethereal Staff. This will let him steal MP, which results in more casts of his powers too. Now personally, I tend to build almost all Aura items on Ares, since I primarily play Arena, and I can get away with that. My team is almost always underfoot and ready to fight. Normally, I recommend build guides, but I’m not a fan of them on Guardians. Guardian builds are so fluid, and the items you need can change from moment to moment. But you know what I do love on Ares? Blink. Blink is a scumbag move, it’s aggressive, and it lets you pop out of nowhere, surprise a team and pick them up for a chain ride. Should you be in Arena and dealing with a mirror match, try to hold your Blink/Ult combo until the enemy uses their ult. That way you can avoid his ult, use yours, and hopefully still get a few opponents with it.

While Ares cannot peel very well, he’s still a menace. Especially when paired with Wards. Why’s that? Remember how I said he can hit his ultimate through walls? With some proper team composition and a little luck, you can drag people through a wall! Say you bring Tyr, he juggles the enemy into a jungle wall. Before they can get away or react, you hit 4, and start to drift towards your Anubis or Poseidon. They don’t have beads because they popped them earlier, and now they’re away from their teammates and also heading back to base. This is definitely a “best case” scenario, but that’s the kind of thing that can happen with teamwork and wards. Guardians should always drop wards in key locations, but so should your whole team. I do want to go back to an item though – Void Stone. It’s an Aura Item, and it lowers enemy gods Magic Defense. With this and a few other items in hand, you can go hunting for other gods. One of my favorite things to do in a Conquest setting is to head into the jungle, while the enemy jungler/gods are doing Jungle Camps. Drop three chains on them, activate your Buff, then Flame Thrower, and laugh as they can’t escape, and just take tons of damage. Ares gets a lot of hate for being a one-trick (throw ult lul), and even people on your own team will call your ultimate worthless. That’s even after you burn your ult to make sure their ultimates hit without any resistance. That’s going to be the life you lead. You’ll hear a lot of stuff about how you aren’t Deathwalker, your kit sucks, and you should have picked someone (anyone) else. There are situations where Ares isn’t the right call, but with the right measure of teamwork and trickery, you can punish just about any team with the might of the God of War.