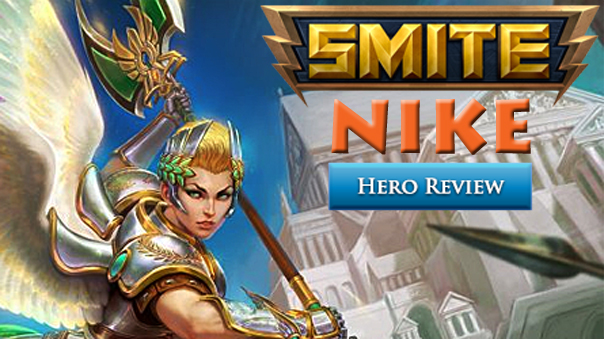 I’m not trying to get sued by a shoe corporation! So, Just Win It. Nike is the latest addition to the Smite cast, and she joins the group of already impressive/terrifying warriors. Spoiler alert: she fits in just fine. She’s along the Odin style of fighter, in that she brings a lot of damage, and a lot of frustration to the other team. A huge shield, armor shred, a knock up, a leap? In mythology, Nike’s favor is the key to victory. If you do not have her eye, you will only be a sufferer of abject failure. Anytime a great physical deed occurred, it was Nike that gave her blessing to that person. She was also a key warrior against the Titans, and that apparently mattered a lot to Zeus. Without her, the Titans would have no doubt won, and Zeus, Hades and Poseidon would not have the popular role in the world of the Gods they still enjoy. She has a pretty familiar look, reminding me vaguely of Hawkgirl from DC Comics, while wielding a brilliant weapon, and gorgeous armor. She’s added to the “Easy” list of fighters, and I can definitely see that. She’s not rocket science to play. There’s only a few different ways to build her, and you can decide early if you’re going to set up kills for your friends, or if victory is measured by how many bodies you can stack up.

I love Nike though. She brings an interesting blend of tankiness and damage to a team, and I can personally see her doing hilarious things with her knock up, making her viable with quite a few comps. I’d like to see her paired with people like Zeus [knock up into ult], Anhur [knock up into damage], Ares and Poseidon [Ult Slow into Ares Ult into Poisedon Ult], and there are so many more silly things that you can do with her. She’s powerful, potentially ban-worthy in my opinion, but just because she’s “Easy” doesn’t mean that she’s going to be free wins. Being awful with her will not guarantee you anything. I’ve tried playing her with two build styles, and both of them were fun, though admittedly. . . building damage was far more fun simply because once I lept in, people evaporated into a fine mist thanks to my ludicrous attack speed. She’s the Goddess of Victory, and few Gods I’ve played lately really felt like they filled their mythological shoes quite like her.

Now HiRez said she’s not a support, and you shouldn’t really play her support. However instinct is a hard thing to fight, and I ended up doing it anyway! She’s got interesting tools for it. But my “support” was more, I tried desperately to get kills, and wound up setting them up for my friends instead. Or they stole them; dealer’s choice. But with her cleaving auto-attacks, I’d be able to see her as a jungler too. She also has a terrific initiate in that leap, and her ultimate makes her incredibly hard to kill. Nike can go practically anywhere she pleases and do well, but I’d try to not play her against ranged characters unless you’re incredibly skilled in that risky business. She’s got beefy early-game damage, and even with a few defensive items, the Goddess of Victory can bring the pain, and there’s not a lot people can do to stop her once she gets her hands on them. She also brings free damage to her team, just for completing a series of goals, which I’ll get into very shortly. Her kit works well with itself and with others, such as her knocking up a group of people, or just one person that she has targeted to die.

Passive: To Victory [Buff]! Nike sets three goals for her team to meet. Completing these will give them Power [+8/10/12%] and Movement Speed [+3/5/7%], which is wonderful. These goals are: 1: Eliminate 10 Gods as a Team 2: Eliminate 200 Minions as a Team 3: Two Gods reach level 20. It’s a fantastic, fitting passive, and is pretty easy to get all three, though the last one will clearly not happen until end-game unless your team is insanely far ahead.

2: Plan of Action [Stimulant]: Nike comes up with a brilliant plan for victory! The next ability she uses will have a greater/additional effect in addition to bonus damage [20/30/40/50/60]. Passive: Nike gains HP5 [10/15/20/25/30] simply for having Plan of Action. Plan of Action will not go away until she’s used an ability, once it’s been activated.

3: Valiant Leap [Leap, CC]: Nike spreads her wings, and leaps forward! Anyone she happens to land on gets knocked up and dealt damage to [65/115/165/215/265 (+60% of your physical power)] as a result. The jump is fairly slow though, and not terribly hard to predict unless she uses it to get in front of them instead of using the knock up. Plan of Action Buff: The leap is much faster. That’s it!

Now, I’ve seen a lot of talk about how to build Nike. I’ve tried a few different ways to play her, and I found them all to be ultimately fun. It really depends on what your end-game is. Are you trying to be a beefy wall and set up kills for your friends/teammates? Or do you want to do tons of damage and make other people sad? Even if you’re going Attack Speed/Damage Nike, you will still want at least one protective item anyway. That’s just smart business. You won’t always have that ultimate to get you out of a position you shouldn’t be in. If you’re going to be tanky Nike, she’ll still have damage. Here are some of my favorite items for that: Midgardian Mail, Hide of the Urchin, Mail of Renewal, Breastplate of Valor, Jotun’s, Boots. Of course there are other options, and you should always build to counter the other team’s damage…

I also very much like Stone of Gaea as far as tank/survivability items go. You can also go with damage/attack speed. This was so. Damn. Fun. Is it viable or even advisable? Eh, I dunno about that. But lots of people are doing damage Nike, so I can’t say “Don’t do it!” I built Frostbound, Warrior Boots, Hastened Fatalis, and another Attack Speed item depending on what you need, then a couple of the damage preventing items. I really enjoy Nimean Lion on her too to make late game hunters think twice about dueling me. But if I’m going to get Urchin, it’s going to be early/got to be first. You don’t want it to go to waste.

I don’t have a lot of complaints about Nike. I would like to see you be able to pick the goals for her passive, but I imagine that would be annoying, and either make it too easy/too hard to get the buff, depending on what options there were. It would just be annoying in the end, but I like that. One of the keys is using her 2, Plan of Action correctly. It’s a huge part of her kit, and knowing when to use which buffed ability is so damn important. I tend to leave 2 on and not activate abilities until I need to, but that’s probably a really bad idea. But like I said earlier, she pairs well with so many different Gods. Her kit lets her do ridiculous things with almost anyone. I feel like she is… a weaker Odin in some regards. His shield can be used virtually all the time, but Nike can only use hers once every 100 seconds, depending on CDR [TRY AND GET CDR WITH HER FOR THE LOVE OF GOD]. I do feel like the Plan of Action buffs are a little bland, but not enough that I wouldn’t play her. Because I will. She’s one of my favorite fighters, next to Odin and Bellona. She makes herself a threat simply by being in the fight, and though she can be a little squishy, she must be dealt with, and that makes me feel good. She’s a unique and fun fighter, and fighters [to me] can be a little boring sometimes. She is anything but. #justdunkit