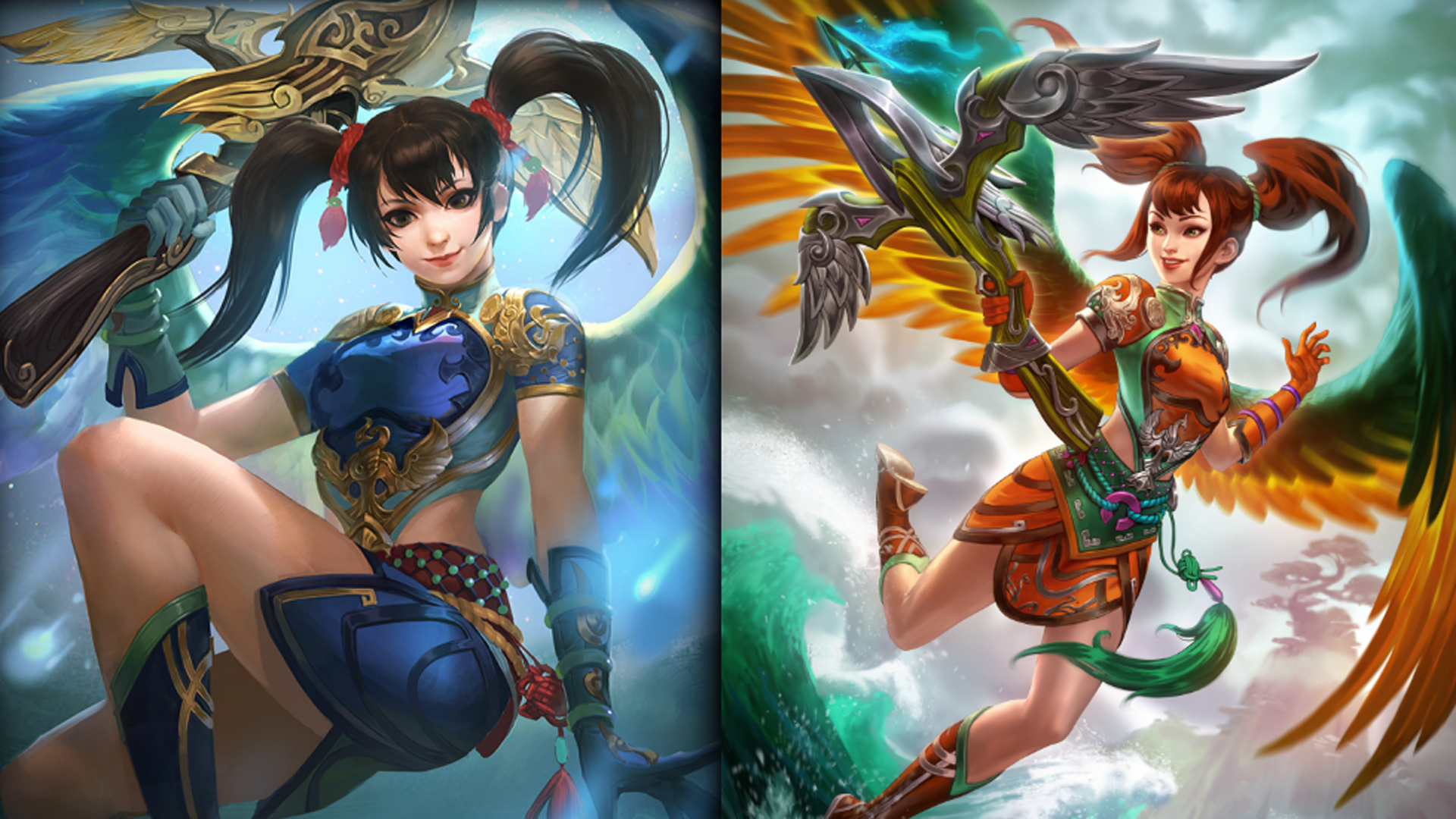 Jing Wei, is a bird entity linked to the Emperor Yan, and is the star of the tale of Jing Wei; she lost her life to the sea and vowed to fill the sea by dropping sticks and rocks into the East Sea one by one. She doesn’t sound too bright in that tale, and her character in Smite shows that; she’s pretty giddy and free spirited. She’s easy to play, and is a Hunter though I find it quite peculiar that two Hunters in a row were made [and by the same developer I believe]. In a way her kit feels more like what we’ve come to expect from an assassin, which makes playing her quite a different experience than most hunter mains are likely used to. While yes, she is “easy” to play, and is incredibly mobile, her movement is predictable and can be predicted and avoided without much effort. One of the biggest criticisms I have about her is she feels much like the ADC Quinn, from League of Legends. Her passive is frighteningly similar to Quinn’s ult, they are both bird-styled characters and both wield crossbows. A couple of pros/cons that I’d like to give consideration to:

Though she is a Hunter, you know where I’d really like to see her played? Mid Lane. Though I’d like to see her be a Jungler, she’s as squishy as Cupid, so she’d never survive the jungle by herself. Not to mention she’d need some sustain and her kit just doesn’t support it well. Mid lane would let her show off her mobility, and smash squishy Spellcasters into the ground. Not to mention she could be swapping lanes with incredible speed, offering ganks and going back to her own lane without anyone being the wiser. From the moment you leave the platform, you begin flying, and without boots or any movement speed buffs, you can easily get to the first tower. She can be used with Teleport to fly to an area, get a gank, and teleport back to her lane and resume killing the mid-laner. With planning and patience, this flighty Hunter can cause problems for entire games. Speaking of which, let’s get to her kit!

Upon leaving a Summoning Platform, Jing Wei takes flight! For five seconds, she flies through the air, immune to CC and it counts as a dash. She can land prematurely by clicking. It’s also curious to note that I do believe you can [from platform] use Teleport to TP to a ward/tower, and take flight from there. I hope to include a gif as proof, but I have seen it happen!

Jing Wei throws out a little tornado, at a pretty decent range. If an enemy God/Gods wander into it/get it cast under them, they will be knocked up and pushed back. Jing Wei can use it as well, if she leaps into it, she gains 25% Attack Speed for five seconds. Also interesting to note that if you time it well, you can use her “3” to dash through the air through the Gust, making her look really cool and get a bit more of an edge.

Another Steroid! Like her “1”, activating her Explosive Bolts will give Jing Wei critical chance. In addition, the next 3 auto attacks have AOE damage. These attacks are wide, have AOE splash, and crit? No brainer. My favorite thing to do is pair her with Ares [my favorite God in-game], and when he snatches everyone up in the ult, Bolt + Ult them back to their base!

This is a little dash; use it in conjunction with Persistent Gust whenever possible. But there’s another useful tidbid! If you get knocked up by an enemy, you can use the Dash to take you away from the enemy team! It won’t get you far, but just enough to maybe not die. I believe you can also use Beads the moment you get knocked up by Ao Kuang and Dash away from his ult, or from Kumbakarna’s, but I’m not 100%. Those are still in the lab from me!

After a nice, long windup, she flies through the air, dropping explosions onto a fat line of land. It only hits once per person, though it may look otherwise. However, it’s really hard to land if they see it coming, thanks to the start up. You can use your 1+3 to fly over the enemy team and blast them from behind, or combine it with Odin or Ares’ ult to prevent them from escaping the damage. There are lots of wombo-options here! Just expect to use it more often as a get out of jail card, as you typically won’t be building raw damage on Jing Wei, so her ulti won’t hit that hard.

As far as Skill Order? For me, 2, 1, 3, with 4 anytime I have the chance to. There are a few combos you can do with her, though. The above listed 1+3 for mobility, you can pop 2 before doing that to really get some damage from behind. If you are really fancy, tack on the ult at the end to wipe up your target and make a quick escape before retaliation.

I bet you want some items, right? Items are good, and without them, Jing Wei has virtually no Attack Speed outside of her “1”. Her kit has the stat boosts of Hastened Fatalis, and effect of Golden Bow built in with her Steroids, so I look for other items. I feel the “Crit” Path is best for her, focusing on on-hit effects and crit damage boosts to maximize her 2 into an assassination ability. Devourer’s Gauntlet as a starting item, going into Ninja Tabi and Ichaival for Attack Speed. From there, items like Malice, Deathbringer, and situationally the Wind Demon to maximize my Crit Potential while countering enemy heals. I was easily blasting people with AA’s for 600-800 damage. And with the health pools low as they tend to be? Deleted. You can also go a Penetration route, for items like Asi, Qin’s Sai, and Titan’s Bane if they stacked bulky gods across their team. If I’m really ahead and getting focused, I might even opt for frostbound hammer end-game to keep enemy’s at range while buffing up my survivability. Even at end-game you’ll be well under 2k hp so a defensive item might give you the chance late game to live long enough to make an escape.

All told? I don’t think Jing Wei is as ridiculously powerful as Skadi is, but she’s got a place on any map. From Arena to Assault, Conquest or wherever, she will definitely use her mobility to make an impact on whatever game she’s a part of. But you must make certain to protect her! She’s incredibly squishy, and outside of situationally AD + Defense items, I don’t think any manner of pure defense items will curtail that. So I just build big items, and go for as much crit damage and maxed out attack speed as early as possible. If you can get an early lead and become a tank shredder, no one will be able to pin you down!