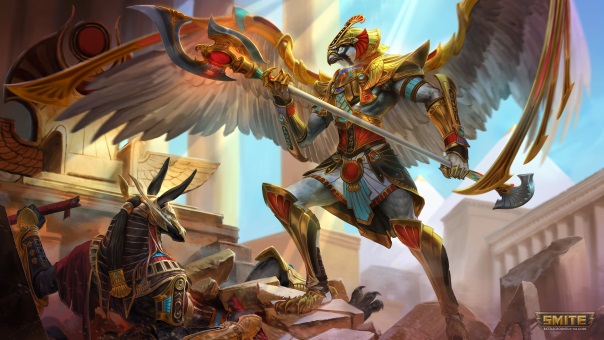 We’re hosting a skin giveaway in the link below also!

You’re going to see this again in my Set review, but I firmly stand by this: I don’t think Horus is a warrior. Horus is incredible, and if I have a feeling the heals on his 3 are going to catch a nerf bat before too long. The heal is not too bad, especially once your opponents start building anti-heal. If they don’t build to counter a tanky healer, that’s not my problem. Perhaps Hirez is moving away from class-based designs, which is awesome. I go into this thought in a bit more detail in my Set write-up. Horus is really just a guardian that’s not as tanky as his brethren, nor does he deal guardian damage. Horus is one of the two gods released in this patch, and since it’s a double release for the first time, I had to pull double duty and work on both gods at once. I focused on Horus first, because his kit appeals to me more, and has a playstyle that synergizes with how I approach the game. So let’s talk some SMITE!

Horus is the son of Osiris and is the rightful heir to the crown, destined to rule the Egyptian Pantheon. However, Set usurped the throne and murdered Osiris in cold blood. Set wishes to rule the land but only relies on himself. Horus however, is a natural leader, and brings people up, instead of tearing them down as Set does. It’s up to Horus to build the Egyptian pantheon back to its former glory and protect it from Set, who wants to bring everything down into darkness, chaos, and death. Set will stop at nothing to ruin, and Horus will not relent in his quest to fix what has been torn asunder.

Horus started pretty strong in SMITE, in my opinion. His difficulty is “Average”, and I can see that being fairly accurate. He’s got a fair amount of mobility, and his ultimate is very much a double-edged sword. More often than not, you’re going to pop it, make the call, and nobody’s going to go with you. Next thing you know, your screen is black and white, and everyone’s flaming you for intentionally feeding. That’s something I can see Horus mains having to endure in the near future. However, you can do some bonkers stuff with it. Throw Hercules’ boulder through it! Pop Da Ji’s ult on it and pull people from halfway across the Arena map! Drop a Hades/Baron Ult on it right as it’s taking off! The world is your oyster! Normally, a warrior’s goal is to get tanky, still do damage, and be annoying. They tend to get more kills than their tankier cousins in the guardian role. Horus is different, and his kit is built around aiding others, as a support-warrior. Now, I’m sure you can build him in a damage style if that’s what you want, but I just don’t see it being fun. The only item in the attack tree I ever find myself building is Blackthorn Hammer, maybe Jotuun’s. But I prefer to approach him as a guardian since he is a tanky support warrior. I treat him as such.

Horus is not your typical Warrior, he’s something special. The Rightful Heir’s goal is to help his friends, to set up kills, and to get them out of bad situations. Did your 12-star Susano invariably dive into 4 enemies without warning? Well, Horus is good, but he’s not that good. His 3 is an incredible tool to save your friends and to get into position for kills. It travels incredibly far, and if the target has already used a movement ability, he goes with them! If Set teleports to a clone, Horus will stop at the old spot, then move to the new one, and in addition to being flashy, it doesn’t mean you wasted the ability. Horus’ kit makes him viable for so many different teams, but one of the gods I want to see him used with is Awilix. It’s probably not a surprise, but with a 1 that is a multi-target knock-up, Awilix will have her pick of the litter here.

I want CDR on Horus the most. His cooldowns are a little on the high side, and with each ability being incredibly useful, I want them open at all times. However, while Horus gets built like a tank by me, instead of building damage, I have found that teams tend (at least in casual play) see a Horus, and just decide they don’t have to tank, and this is foolish. He can tank, and can help people, but he’s not a replacement for the entire frontline. Horus being tanky goes well with the heal in his passive, but like Set, the numbers just aren’t there. More often than not, I have no idea that I even received a heal from it. They could probably just get all-new passives, or have the numbers increased (or a bold idea, to go with a percentage heal instead of flat numbers). You’re going to see this again in the next piece, sorry in advance.

One of the things that makes Horus great despite his need to build a tank and his, in my opinion, lack of damage, is how much of a threat he still is. His skills combo together nicely, and if your team is spread out, he can move in and out of position nicely. His combo is pretty simple though, when you want to engage: 2, find your stun, hit the cleave, follow up with the 1 for the knockup, and if you need to get out, spin the camera, hit a 3 on a minion/god, and just like that, you set up your jungler for a kill, and got out safe and sound. Though speaking of jungling, I know I rag on him going damage a lot, I’ve seen him in the solo lane, I’ve seen him support, and most interesting, jungle. I don’t like his wave clear for solo or for jungling, personally. His only real, reliable wave clear from a distance is popping his 1. That means your knock-up is no longer available, so you have to get in on someone, pop it, and then hit the wave. That just seems to be silly to me. His 2 has a cleave, but you have to burn your dash to get the cleave as well. His auto-attacks, once you’ve built a damage item or two aren’t bad, but his auto-attack animation just feels like it’s a shorter range than other warriors.

Horus can definitely deal solid damage, but it is contrary to how his kit is designed. Horus is a support warrior and has so many abilities to save his friends, damage ought to be secondary. Horus’ ultimate is a bit harder to use in Arena, but in Conquest, his ultimate can make a much bigger impact. This is especially true after a fight has already broken out in a nice, tight area. Since Horus’ 3 can go through walls/structures, he can make some pretty incredible ganks/saves, better if you’ve counter-warded. I love the idea of him roaming the map in Conquest, so I’d keep him in the support/guardian role. You still have a lot of potential for tankiness elsewhere, provided your team is working together. But what makes Horus special to me is that he prepares his team for success. He’s a cooler Ganesha. He’s Ganesha with a great heal. On that note, I have a hard time picking what skill I focus on maxing first. My gut instinct says “Heal”, but if they start building anti-heal, you’re wasting that point potentially. So I focus on my heal first, and as I level, I pay attention to what they’re building. If I see anti-heal, I shift to 1 or 2. Because that heal does incredible numbers, even without healing items.

I’m not a fan of Damage Horus, but if I’m going to, I’m going to build Blackthorn Hammer. All warriors seem to build it, and it’s no big secret why. It offers Physical Power, Health, Mana, and CDR/MP5 depending on what your Mana Pool is. I didn’t really have mana issues with Horus either, so I wound up with more CDR instead of MP5. I started my first matches with Blackthorn Hammer, Gladiator Shield (typical Warrior start), but I wasn’t happy with it. I could deal damage, but my diving in to save people typically got me killed. I just wasn’t as tanky as I’d like. Perhaps it’s because I wasn’t as aggressive or greedy as I could have been. If I’m going to mix any item into my tank build though, it would have to be Blackthorn Hammer. There’s no reason for anything else, but if it came down to adding more attack items, it would be Masamune (Phys Damage, Health, Movement Speed) and/or Runeforged Hammer (Physical Power, Health, Bonus Damage when CCed). I just couldn’t see where crit or attack speed really benefited him, so I would likely go with Power/Pen. The meat of his damage seemed like it was around his abilities, so stack the physical power.

I know I’m a little biased, but hey, I’m honest about it – but tank Horus is far more fun to me. I wanted to try the Healer items on him, but didn’t, because it didn’t seem like it would match what stats he needs. In the future, I’m going to try it for laughs. The way I prefer to build Horus, is I start with a focus towards Breastplate of Valor, Boots, then I see what my team needs in term of defenses. My favorite Magic Resistance item has to be Genji’s Guard though. It offers health, Magic Protection, MP5, CDR, and additional CDR when you take magical damage, which happens pretty damn often. This can only pop every 30 seconds, but it’s reliable. I was going with Shogun’s at first, and I stand by it being a fine pick if you have Attack Speed-oriented gods. Since he has such weak clear in the early game, starting with and standing by guardian Horus just feels right to me.

I know it sounds a little biased against damage on Horus, I understand that. After days of playing Horus, I felt like I impacted my team in a more positive way when I focused on getting kills for other players, instead of stealing them for myself with damage builds. His ultimate is a great ability and can set up some truly magnificent moments, but it relies greatly on your team seeing it, paying attention to it, and knowing what you want to do with it. So in situations where teams are communicating via voice (SPL or otherwise), Horus is going to do some great things, Hell, it doesn’t even have to be for kills. You can use it to get to Fire Giant/Phoenix/Tower faster after a fight has gone down. Out of the two gods, I like Set’s aesthetic more, but I like Horus’ playstyle. I could even see him being paired with other warriors instead of a guardian on a team comp, thanks to how beefy and hard-to-kill some other guardians are. As a CC-heavy god, he pairs well with gods that lack it (Set, as an example. His slow isn’t that great). Honestly, Horus fits in just about every comp. I can’t see a scenario where he doesn’t bring something useful to the team with