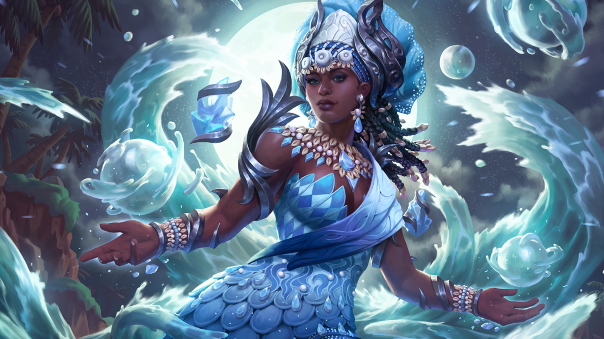 Can you hear that bell in the distance? It’s the “We have a new guardian” alarm, and I began ringing it the moment Yemoja debuted. Yemoja ticks a lot of boxes. She’s a guardian, she’s a member of the new Yoruba Pantheon, and she’s a unique style of guardian. Yemoja doesn’t use mana and only has one ability that has a real cooldown (ultimate). Her auto-attack also has a heal-over-time. You may assume “Oh, she’s going to be busted and infuriating to deal with”. I’m here to tell you that you would be wrong. She is not a frontline guardian, she’s a backline guardian. A backline guardian is built for comps that have strong jungler and warriors diving. Yemoja’s job is to heal and peel, so the damage can do their job. You aren’t going to be on the frontline taking all the hits. This is why I like her with another guardian or a mightier warrior.

Yemoja is the Goddess of the Ogun River, and she is the beginning. From her waters sprang the very first mortals, and she is the guardian of the mysteries of life itself. The sheer amount of people that seek her aid is staggering. Fishermen and sailors seek safe passage and good hunting. Women also ask her blessing, as she’s the goddess of childbirth and all things feminine. Her patience is not finite, and her rage is as the roiling seas and terrifying waves crashing upon the shore. The need for her aid is great, so she leaves her solitude, to offer her wisdom and blessings to those who seek them out. Yemoja has come to the Battleground of the Gods.
Abilities:

The Rainmaker: I mean the Playmaker, but I wanted to reference Okada. Since this is my article. . . Yemoja has championship-level saving power! Her ultimate can be used for any number of fantastic purposes. Trap people under your tower? Got it. Want to lock people down for other ults? Easy peasy. Want to spam your 1 while your team gets in position? That’s a possibility too! If someone’s running away from you, throw a max-range 3 to knock them right back into range. It’s harder to land her 1, but it’s also a way to slow people down to set up kills or save your allies.

Thinking-Person’s Guardian: Smite Wiki’s description lists her as “Average”, but I’m not sure I agree with that difficulty. I list this as a Pro, because she has a lot of depth for such a simple kit. Her builds are not going to vary a whole lot, and she won’t get tanky until the late game, but she offers a lot. I don’t think she’s great in Arena, but I foresee a good Yemoja being a literal force of nature in Conquest and Joust. I don’t think any of her ratios are monstrous, but she can do a lot for a team that’s willing to work together. You have to plan ahead and out-think your opponents to get the most out of her abilities, in my estimation. You cannot spam them.

Failure is Frequent: Yemoja’s 1 casts and bounces slow and her 2 moves very quick. More often than not, people move out of the way of it.  I find that the 3 usually casts either too close or too far away. A frequent occurrence is that your team is trying to secure a kill. You pop your 3 and your ally bounces back towards you. I love her kit, but god bless it takes some time to get used to. It’s definitely a double-edged sword.

Not Sold on Omi: Omi isn’t a bad system, but I’m confused about it. She doesn’t have cooldowns, except her ult, but CDR increases Omi generation? Something about that doesn’t add up in my head. Building mana items increases Omi as well, which is weird because again, she doesn’t use Mana or MP5. Magical Power or Defenses might be a better way to go. Her costs are pretty high too, and she can have a great deal of downtime with no abilities to cast.

Yemoja is an interesting guardian, though her early game feels more like a mage. I like her kit a great deal, and it’s fun without being bloated. I don’t understand why her 1 has two abilities, but I still don’t see a serious amount of bloat. It’s important for people to be aware of exactly what she is, though. She’s not a frontline guardian that takes a ton of damage and shrugs it off. In the late game, sure, you can frontline it up, but at the start of the game you are soft and squishy. Since she uses Omi instead of mana, Yemoja can stay in lane longer than most guardians. Since she has no real cooldowns to speak of, she is a mighty force in the laning phase. She can keep the lane covered in bubbles, and poke from nice distance.

The god of rivers is much stronger in Conquest than Arena, due to the amount of space you have to work with. The humongous waves of her ultimate don’t mean a lot if your enemy team can walk around it. But pushing it down a lane, or across a tower, so they have no choice but to stay makes it more useful. It’s also harder to evade her other abilities with the tighter spaces of lanes and jungle alleys. Even her 3, which I hate, is far more useful in Joust, Conquest, or Assault. Mastering her 3 is key though since your team can use it to gain movement speed and protections in a pinch.

Success with Yemoja lies in your ability to predict your opponent’s moves, while also keeping your friends in the fight. You can’t spam abilities unless you have your ultimate up. That is the only time it’s okay to bash your 1 key. You do want to have as much Omi regen as possible though because your 2 is a pretty solid heal. Hopefully, the people you play with realize your Basic Attack heal is a heal-over-time. I do think it’s a bit on the weak side though. It is such a disheartening sight to see in the early parts of a game. 1 or 2 as a green number is soul-breaking. But with a few +healing items, you can make her a force to be reckoned with. Even if your opponents buy anti-heal, you will have shields to apply.

Yemoja’s a god where solid communication with your team can trap your foes in plenty of watery doom. However, I don’t feel like she’d make a very good mid-lane or solo lane god. Sure, she can heal herself and has no mana to worry about, but her abilities cast slow. On top of this, she has a limited pool of Omi. Yemoja can only do so much casting in the early game. Stronger, more dedicated gods will overwhelm and farm her for free. I’m sure there are people that have brewed up some damage builds, but I still would not put her in a lane on her own. No dedicated escape, and low early game damage? That’s a recipe for disaster.

Possibly the most important item in her entire kit is Breastplate of Valor. Every single stat is useful to her. You need CDR, MP5, and Mana to boost your kit, and having physical defense is never a bad thing.  I want some of the +Healing Items, a few tanky items, and Gem of Isolation. If you want to build Auras you can, but it will hamper the strength of your healing, which is a key feature to Yemoja. This is one of the real issues for me, balancing Auras and Healing while not feeling like a piece of wet paper. I’d love to buy Rod of Asclepius and Lotus Crown, but having both makes her less tanky. While she is a backline guardian, you still want to have those defensive auras for your team. You can’t always count on your warriors/guardians/assassins to have anything like that. It’s safer to assume that it’s up to you. Yet, if you do have a tanky team, there are plenty of options to abuse people with.
Core Items: Shoes of Focus, Breastplate of Valor, Lotus Crown

As always, builds are very much situational, so build for what you need, not based on builds you find online.

I like Yemoja as a character concept. She’s different from the other guardians we’ve received in the past. She straddles the line between mage and tank in a fun way. She can crank out numbers, but you have to actively build for it. Unlike Ymir, Bacchus, or other guardians, she’s not granted tons of free damage. She has a different purpose, and people who play her hyper-aggressive are missing the point. Her heal is a bit on the weak side, but as I have surmised, the goal is to build lots of CDR. You build CDR, auto-attack and mash your 2 as often as possible, but it can limit what Yemoja can build and do. This is something I’d like to see changed on her. Sure, she can poke, as I’ve already stated, but that doesn’t mean she’s aggressive. If your team expects you on the frontline, they’re going to be disappointed. She fits best into teams that already have plenty of beef. Warriors may as well be guardians now anyway, and you can play the tankier guardians in a variety of roles. Her kit has fun applications if you’re paying attention and playing with patience. I stand by it: Yemoja is the thinking person’s guardian.