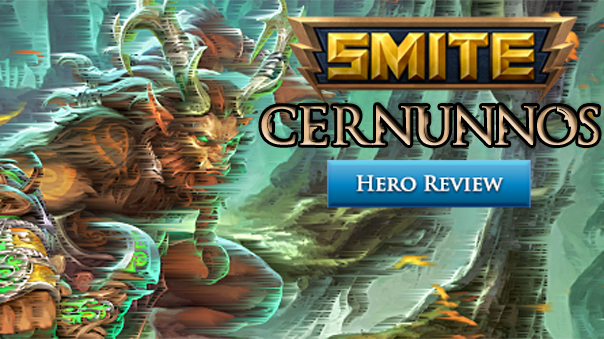 Come and feast, a voice calls from SMITE. It is the voice of Cernunnos, the God of Fertility, Life, Animals, Wealth, and the Underworld. He is the Master of the Hunt, and demands you treat beasts of the forest and land with due respect. Failure to do so will make you his target, and that’s not ideal! Cernunnos was here at the time of the shaping of the Great Wheel, and watches the seasons come and pass. With each changing season, he changes as well. He is older than the Wheel, but yet is a slave to its will. This Hunter slays the arrogant, and rewards the humble with continuing life. What a perfect fit to be the second God of the Celtic pantheon! I can’t recall if he was on my list of “Gods I want to see in the Celtic Pantheon” but I’m pretty sure he was. Cernunnos is defined as Average difficulty, and I can see that. Any Hunter that I can play? They can’t be too hard. Speaking of, I think I finally found a Hunter that speaks to me. He’s got the tools I love in my Guardians/Supports, along with the damage a Hunter needs to thrive. A root, slow, a polymorph, plus tons of damage?  I’m there!

The theme of the Celtic pantheon appears to be “breaking the mold,” and this is quite true with Cernunnos. He doesn’t have a steroid like many of the Hunters have, he can do most of what he needs a support to do in addition. I can see him using the summer buff to be a jungler, or the spring buff to hang in the solo lane, soak up that free lifesteal! Cernunnos can go where he pleases, and there’s no one that can stop him from doing it! That’s one of the things I like, is flexibility. Cernunnos has it in spades. The fact that his “1” has basically no timer, and you can swap between seasons between auto-attacks really speaks to being able to go and do whatever he wants. There are some other things that might be fun to do with him, like Flickering Ritual, to leave a bad situation, or to suddenly appear, and polymorph a ganking enemy. Hunter is clearly his main role, but he can go pretty much anywhere, and that’s the point of being a great hunter – to always have a way to take care of your prey.

Passive: Heavy Glaive [Buff]: Cernunnos wields a Heavy Glaive in combat, and when he throws it, it also harms other enemies in melee range [12 units]. It does not proc other abilities or items, but deals 25% of his basic attack damage to anyone around him.

1: Shifter of Seasons [Buff]: Cernunnos honors the Wheel of Time and the Seasons. Each time he activates this ability, his skin tone changes, and so does the bonus that goes with his Auto-Attack. It starts on spring, then moves to summer, autumn, and winter. It has a .5 second cooldown, you’ll barely even notice it. It can be activated over and over rapidly, and can also be activated between auto-attacks [which you should do for maximum effectiveness in a fight].

4: The Wild Hunt [Debuff, CC, Polymorph]:  Cernunnos marks a large area for the Wild Hunt to start. After a brief pause, all enemy Gods within the area are turned into harmless boars, and take damage [200/250/300/350/400 (+90% of your physical power)]. Boars are considered silenced, and disarmed. In addition the polymorph does not suffer from diminishing returns. Everyone gets turned into a boar! The polymorph lasts for two seconds and is much easier to land with crowd control first.

As you can see, and will see in a bit, he’s ridiculously good. While part of me thinks his “1” is just too good, but at least you have to follow the cycle of seasons. I do think it takes a fair amount of skill to land the auto, swap seasons, and not whiff the next auto attack. I have to say, I’m genuinely surprised his “3” didn’t have a stun or knockback to it, but I’m glad it didn’t in retrospect. That’s just what he needs; another crowd control power! You can build him how you’d like, you can go where you please, but that doesn’t mean you should go wherever and do anything. I do fear he could promote bad gameplay decisions because of this. While he does work well with others, he’s his own combo machine. You can grab Frostbound on him, and have two slows, or build Bloodforge and stack Lifesteal on Lifesteal. Almost anything you build on him will compliment what he can already do, and make it better.

However, I have an opinion that might not be so popular [and why wouldn’t it be? It’s me after all!], and it’s this: Hastened Fatalis. I love it on him for a pile of reasons. It has all the stats I want, with the added bonus of no movement slowdown with an auto-attack. To me, it’s probably the most important item I build on him. Combine it with Frostbound or with Winter’s Chill, you can tag them with a slow, keep up the pace, and they will never escape your attacks. I’ve heard a few people say to buy Asi early, and sell it for Bloodforge, and that’s not necessarily a bad idea. It’s not one that I employ, but maybe that’s why I’m casual scum for life. My ideal build for Cernunnos in the late game is Ninja Tabi, Deathbringer, Hastened Fatalis, Wind Demon [though I’m also fond of double star], Qin’s Sai and Bloodforge. No defense items for me!  But when I say you can build him however you want, that’s really really accurate in my opinion. You can build heavy crit and rely on your Spring/Winter to get health/slow them down. But I do feel like he’ll suffer greatly without at least one or two Attack Speed items. Unlike a lot of other Hunters, he does not have an AS steroid, but has tons of other ones to make up for it.

So what works well with Cernunnos on a team level? Well that really depends on where he is. Assuming he’s a Hunter, I really want to see him working with Khepri [Drag ‘em in, slow ‘em down, dunk ‘em], Ymir [Build a wall, freeze, and murder], or Ares [wombo combo~].  Honestly, all the Guardians work well with him. You want to get the prey initially slowed or stalled so he can swap over to Winter’s Chill and ensure they don’t get away. Junglers that can do that would be fun too. Since I love the idea of jungle Kumba, maybe that would be a fun thing to see on his team. The jungler doesn’t have to be an assassin or pack insane burst damage, not with Cernunnos on the team anyway. He’s an insane hyper-carry. The longer the game goes on, the more he’s going to do to demolish the other team. So you want your squad to keep you safe and healthy. So why not have a tank jungler, and a caster support? How annoying would it be for Aphrodite to make Cernunnos invincible while he blasts your team to bits and pieces with his glaive? I’d be teeth-pullingly furious, that’s for sure. Then you have Kali lurking somewhere, because why not? Or Khepri, if it’s an Arena match or a place where you can do more silly things.

I can see him having a hard time with Hunters that have a gap closer though. Someone like Anhur who can leap in and interrupt, get over his briars, and avoid the Hunt completely. Anything that can disrupt him before he disrupts you? Skadi, Izanami, Rama, anyone that has a mobility power is going to make life rough for Cernunnos, because he has to burn his dash just to get out. And as a jungler, he can definitely come out of nowhere with his dash to initiate, drop the brambles to make sure nobody gets out alive, and just throw, throw, throw. Though it’s best to try and shut him down as hard as you can, as fast as you can. If you can shut him down hard before he gets attack speed built, you can neutralize a serious threat to your team. The longer you can keep him held down, the harder it’s going to be for him to come back. Him moreso than most Hunters, since he has no AS steroid to get him back in a fight.

All told, Cernunnos is High-Risk, High-Reward, and I love him. While he has no buff for attack speed to make him stand with the other Hunters, he’s got everything else in the game at his beck and call. Why worry about AS, when you can lifesteal at will, debuff, and slow? Oh, and root. And slow again. And reenact one of my favorite films of all time? [Willow! See, we got back to it after all] I feel like he can be held down and stalled pretty hard, but given time and farm, Cernunnos will be more than a match for any other God in the game, though I still think he’s possibly a bit too powerful. I see some adjustments in his future, but I’m not willing to say what I think they ought to be.

I’m still pretty casual, but I play a lot of SMITE. He’s got a very heavy/flexible/bloated kit, and while I love what he does, he might do… a little too much. Cernunnos is just the kind of Hunter I want to learn to master. He’s fun, requires a bit of skill, and the options for how you can play him are damn near endless. No matter what you need, he’s got you covered.