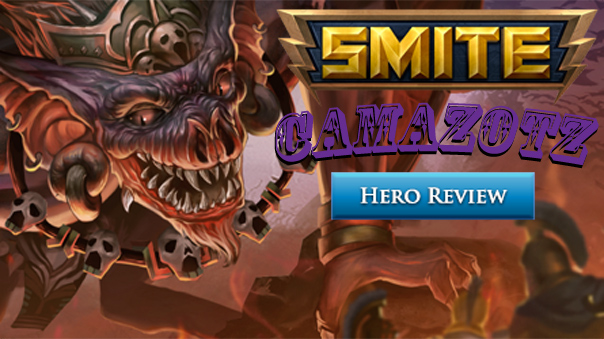 October is almost over, and it’s time to talk about something Spooky! SMITE Spooooky~! Anyway, we have a new assassin in the form of Camazotz! He’s the Mayan “Deadly God of Bats,” and first off: Why do Mayan Gods get the coolest titles? That’s an amazing title! And visually, he really owns that whole “terrifying bat that murders things” schtick. On the “Average” part of the difficulty scale, he’s got a lot of really great, and a few not so great things going for him. First off, he’s one of [if not the] only Assassins that can’t leap over large walls! Yes, a jungler that can’t leap over walls and suddenly delete their opponent. But who is Camazotz, other than a familiar face from Batman: the Animated Series? Xbalanque and his sibling Hunaphu went into the cave of Camazotz and boy was Hunaphu surprised when he absolutely lost his head in the exchange! Camazotz surrounded them in bats and tore it clean off. Xbalanque fashioned a new head for Huanphu, but Camazotz waited. He is shrouded in darkness, waiting for his time to strike duo lane to claim the full set of brotherly heads.

Camazotz has a ton of early-game single-target damage. He can swoop in like a dagger, stabbing whatever offends him the most to death. He gains buffs just for hitting the jungle buff mobs with his “2”, but he can’t leap over most walls and will probably fall off despite hitting a very early snowball. Late game, he’s likely to find the one person that’s not in position and destroy them before returning to useless obscurity.

I love all of the little visual things about him though. That adorable gait and cool voice. He has a funny jump and feels authentic. Camazotz is interesting though. He’s listed as average but this is another one I’m not so sure I agree with. He’s got lots of damage and sure, he can sustain just about forever, but he’s easy to CC for a quick kill. His “3” is a sort of pathetic jump and his ult won’t carry him too far away if he’s not prepared. But if you pay close attention to everything around you, and know what you can leap and what you can’t, you can get kills and secure another victory for darkness!

Camazotz is definitely a jungler, and I wouldn’t want to see him in any lane ever. I mean, sure he could. He’d just have to leave the lane unattended to get three stacks of Vampirism off the jungle mobs, and hope that the actual jungler hasn’t killed them without letting him go and steal some blood. It would be weak, ridiculous and altogether silly to send Camazotz solo against the real master sustainers because he’ll be missing a very huge part of his kit: Vampirism. It’s a great deal of the power behind his damage in my opinion, and lacking it will show in your dueling. And while yes, he can keep his eyes on other players using his kit, that doesn’t mean you shouldn’t ward! As a pretty squishy jungler, I especially would try to keep eyes on Gold Fury/important jungle buffs like Speed or XP at all times. Maybe your support will help ward the edges of your jungle for when they’re in the lane, and it’s everyone’s job to ward. . . but you’re the one in the jungle, so keep your eyes on the prize. And Gold Fury is definitely the prize.

But he can clear the jungle with absolutely no effort, and the stacks of Vampirism will just make it that much easier. While I don’t jungle much, I do understand the ins and outs of it; I just don’t enjoy it. Get your laners to help you ward! One of the big things that will help if you aren’t with friends too, is the voice system. Learn the gank commands and use them! You don’t ever want the opponent to have more vision/more control over the map than you. And Camazotz is not super mobile, so you want any edge you can get. However, once you’re close, they don’t get away so easily. It’s the getting to them that’s the hard part. But what’s he do that’s so great?

Passive: Essence Drinker [Special]: Camazotz has a passive lifesteal buff [5% Physical Lifesteal/Extra Healing]. Essence Drinker also leaves puddles of vitae on the ground when anyone dies. If Camazotz stands on them, he can restore up to 20% of his max mana/hp back. From what I understand, if both teams have a Camazotz, they have to share the puddles. There aren’t any that are unique for either side, and only he can see them. He also drinks faster outside of combat. Vampire Bats will also give him an additional Vampirism Buff.

1: Screech [Projectile/Buff]: Sonar! Camazotz fires off a wave of sound that moves through minions and jungle camps, dealing damage [90/135/180/225/270 (+70% of your physical power)] on their way. But if they hit a God, it will reflect back. If the sound wave hits Camazotz, he will gain vision of them no matter where they go for 15 seconds, as well as give additional physical power [20/25/30/35/40 Physical Power]. It’s also fun to use once you’re close to the enemy and are chasing them but are afraid you won’t quite have enough power. Leap on them, Screech and chase them down!

2: Vampire Bats [Projectile/Buff]: Camazotz sends out a swarm of vampire bats, which deal damage [100/180/260/340/420 (+130% of your physical power)] and return, healing the God. The damage also applies a 30% slow in addition to offering a unique buff if cast on jungle monsters – the vampirism buff lasting 210 seconds which offers additional power [3% Additional Healing/Physical Lifesteal]. It stacks three times, and he does not have to kill the monster to get the buff. Simply damaging it will do.

3: Devour [Leap]: Nice and simple: Camazotz leaps forward and deals damage [80/140/200/260/320 (+75% of your physical power)]/heals [15/25/35/45/55 (+25% of your physical power)] himself per target hit. The jump is ludicrously short, and is probably better used as an escape unless you’re already very close or want to close a tiny gap and get a little more damage in the process. Though it could be used once a teamfight has already started if they are clumped together. Used offensively with great caution.

4: Bat Out Of Hell [Flight]: Camazotz takes flight! He still really can’t get over walls, but he can dive three times, swooping across a small line, damaging [140/180/220/260/300 (+20% of your physical power)] whatever he hits. On the third swoop he lands, but if you can hit more than one God per swoop it deals increased damage [10% Per God]. It’s also important to note that he is immune to CC while in the air, and can do quite a lot of damage at one time to a single target you’re chasing. But it still can’t get over walls, so it’s not great as a surprise attack. You might think you move faster during it, but I don’t think so. You lose a lot taking off and landing, so there’s a great deal of weakness there.

As far as abilities, I’d go with 2, 1, 3, maxing them in that order. You don’t need lots of points in 3, and it can wait til you have absolutely no other choice.

What do you get the Bat that has everything?

Bumba’s. Mask. This item is so important to junglers for damage, and gold. You get full gold in the jungle even if your ally is helping you kill the camp. Great way to start. Jotuun’s and Warrior Tabi are pretty much a given, since they’re basically a must-buy on every physical damage character. The stats for Jotuun’s as a whole are simply a must-purchase. However, you spend a lot of mana dealing damage, so what do you do while still having early to late game damage? I go with Hydra’s Lament. Use an ability, auto hit, rinse and repeat. As long as you wait before using skills, you can do a ton of damage right away. A few must-buys or at least very likely for aggressive items are stuff like Bloodforge for the lifesteal and the useful [very useful] shield, and if you’re feeling arrogant or need to gamble for some raw damage to come back from behind, you can grab a Heartseeker.

But I tend to spend about half of my build on defensive items to compensate for his lack of quality escape plans. Hide of the Urchin/Spirit Robe, Void Shield, items like that. If I’m facing off against heavy casters, I might grab Genji’s Guard for the cooldown reduction for taking magical damage. I don’t get this often though because frankly, if I’m taking magical damage, I’m either getting out or I’m going to die. Though you are an assassin, I don’t feel like I ought to just buy damage items and one defense item like usual because I don’t think that’s playing very safe. He has so much damage built into his kit if you land skills that I feel like you could just build him pure tank and be annoying. Just buy maybe one or two attack items like Hydra/Jotuuns, then just build for endurance. It becomes a game of latching onto someone and never letting go.

I like Camazotz. Physically, he’s perfect. His kit is interesting, even if he’s a bat that can’t leap over and fly across everything. I know there are people that complain that he can’t leap over stuff, but he’s got an absolute ton of damage that needed to be balanced out somehow. If he latches on and you aren’t prepared, you’re probably going to die and it’s going to suck a lot. He has very weak, almost non-existent CC, low mobility, but has damage and an overall pretty strong kit. He’s fun, but he’s not someone I want to see in my competitive games, I tell you. At least not right now. He’s definitely going to be an Assassin you want to see a lot of work and practice with. He has the sustain and potential for tons of damage. He’s not the prototypical jungler, but he’s something new and interesting I think. I feel like he’s going to see a lot of backlash and flames until people really get the hang of him. Then they’ll be on board. But I like Camazotz. He’s going to shake things up.