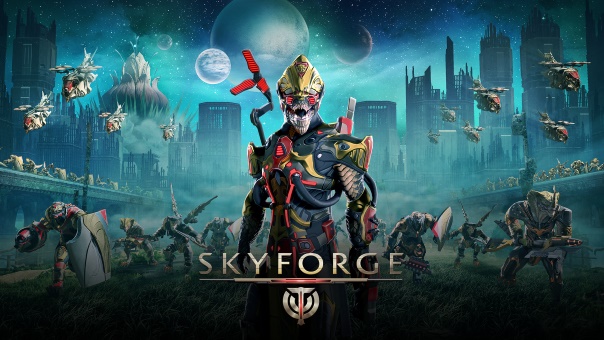 Skyforge has recently released New Horizons, a major new update for players that introduces a ton of new content to the game. We’ve sat down with the update to break it down for you!

“New Horizons” continues the story we took part in back in the “Distant Frequencies” update, and through a portal in the sky, we find ourselves on a new planet – Terra! This planet is covered in dense jungle and foliage, and another feature of this world is the massive fungus/mushroom stalks. This is the first time the Immortals of Aelion have left their home planet to aid another planet. One of the fascinating things about this update is that many of the storyline quests do not give you exact coordinates to complete quests. After all, this is a new world and we know little to nothing about it. They’re not providing detailed guides or map markers, so it’s up to the players to work together in this new world. The community does appear to be coming together to share what they know and help one another out though. As time progresses, our base of operations will grow stronger thanks to the community’s work in the world, the planet will become more habitable, and perhaps unlock more missions.

Though we don’t want to spoil the storyline for you, the starting quests will send you across the surface of Terra, where we place scout markers, search the land, and discover more about these ferocious Draconids. It’s not known if Draconids are native to Terra as of yet, but the only Draconids found are military units, so they may simply be an invading army. The world of Terra once held vast civilizations, as is evident by the ruined cities covered in vines and fungus. The exploration aspects of Terra have been a blast, and though we sometimes stumbled and fell through pits, resulting in another climb to where we were actually going, it certainly felt like a horrific cataclysm had occurred, and one could only guess as to what brought this planet to the state it is in now. The Draconids come in a variety of flavors; one type, in particular, carried a high-power rifle that can stealth and leaps to safety. As we explored Terra, we learned the patterns of the new enemies, and from the military Draconids to the giant horrific mushrooms. For now, we’re just gathering information on the Draconids, trying to figure out just how powerful they are, and if they are ultimately a threat. 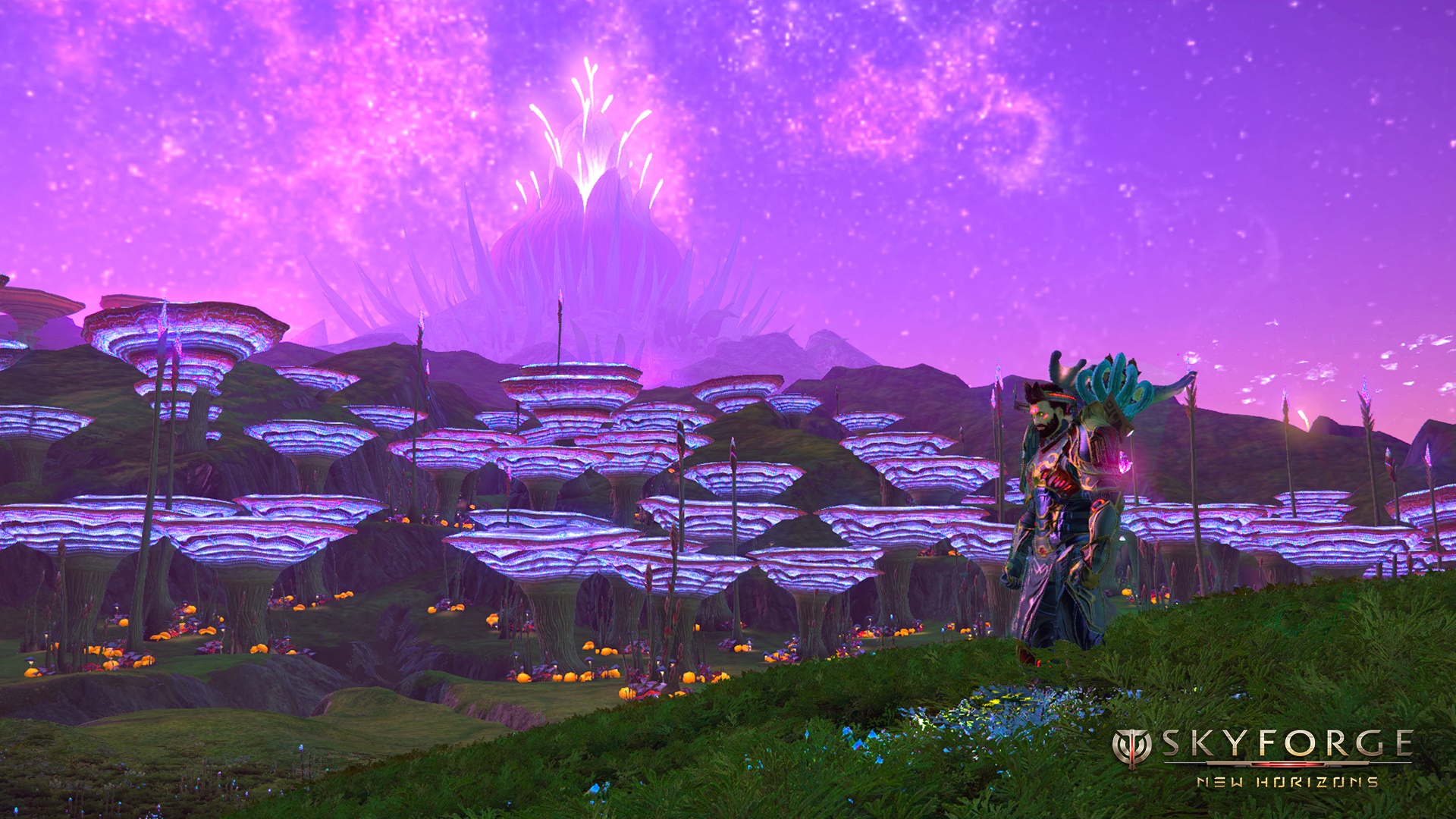 Terra is a confusing, plant-covered planet and can seem pretty hard to navigate at first. No waypoints, no easy way to travel from place to place. It’s up to the community as a whole to survey the planet and to do so, we complete Expeditions. Expeditions will show up on your map in purple-outlined areas and are missions that when completed, go towards the overall progress of the planet. What makes all of this interesting, is this planet works as a sort of PVE ladder, and the pantheons that contribute the most Development Points to the Expeditions will be in control of future Programs, which will help Terra grow as a planet. So hard work is rewarded, and it lets you show off just how much you’ve contributed to the growth of this ruined planet. At the end of an expedition, the Council of Gods rewards the best pantheons and grants them the right to supervise the new programs, and so every pantheon member that works towards this exploration builds the overall rating of their pantheon.

In the New Horizons update, the UI has been updated to make finding tasks and adventures significantly easier. The new interface replaces the old directives of the Council of Gods. Simply pressing “K” pulls up the Directives list, which will have an option for Squad, Region, Group, Battles, Invasion, and Trial gameplay. It also shows the rewards you’ll receive for completing these. You can also click the “Adventures List” to show a list of adventures you can tackle. It has absolutely never been easier to maximize your rewards and growth in-game on any given day. The Skyforge developers also realize that if you are a lapsed player, it can be very hard to catch up to the new content. With that in mind, they made changes to the scaling system, as well as Divine Specializations. For players who are lagging behind in general, the game doesn’t simply increase their Might. It provides bonuses from the laboratory and divine specializations specified for the rank of the adventure they’re on. 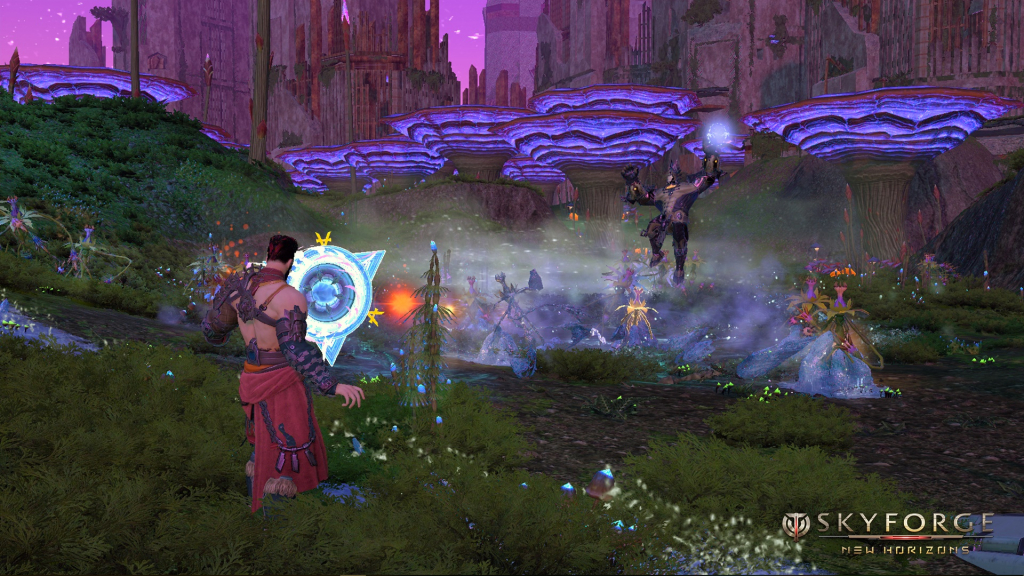 This will help new players jump back into content without feeling like they’re going to be destroyed right away. You still have to learn how to play the class you’re using, but this will make the gateway a little less stressful for new and returning players. The Scaling changes do not affect all of the game modes though. It helps with adventures at the Warm-up difficulty, and invasions, but it does not work in distortions, against an invasion avatar, in Groups, and Parties at the current difficulty. To work on those, you simply have to improve the structures in your capital and improve the quality of your gear. Divine Specializations also changed in this update. Now there are only four Divine Specializations: Knowledge, Willpower, War, and Travel. All of these can be found in the Temple of Deeds, and the “Junior God” tab was removed. The nodes from that are distributed among these new specializations. In addition, Bastions saw some changes. The Stronghold is a new location at your capital, which consolidates Might provided by all Bastions. You can keep upgrading this structure using a currency which is given for quests, from the new interface. This is important, because Bastions are a key source of your Might, and thus, overall strength as a player.

As you can see, Skyforge: New Horizons is a monumental update with lots to explore and do for veterans and offers new players a better chance to get their journey started! Find out more and start your own journey today.