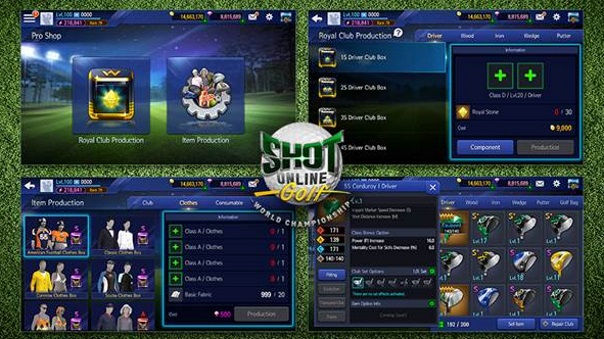 A new update is coming for Webzen’s Shot Online Golf: World Championship and with it come new items. This mobile adaptation of the PC MMO game Shot Online is free to play on mobile and has the new Royal Club and Royal Stone items. These are premium items, and the Royal Club has stats and abilities above the standard clubs in the game. Players will not only be able to produce the Royal Club by using Royal Stone, but also evolve it for higher stats and abilities. Royal Stones are now available for sale in the Shop and can also be obtained through an ongoing event or as extra rewards in the game. Webzen has also added the new Pro Shop system to allow golfers to produce their Royal Clubs and various golf items or clothes that were previously limited to the Shop and as special event rewards.

This latest update also lets users challenge their skills to hit perfect shots with a wide assortment of clubs and equipment that they produce on their own. In addition, this update will include bug fixes, system improvements, adjustments for Evolution Stone and Total Ability, and an enriched experience to enjoy with special events including login event, extra bonus/rewards, and giveaways.