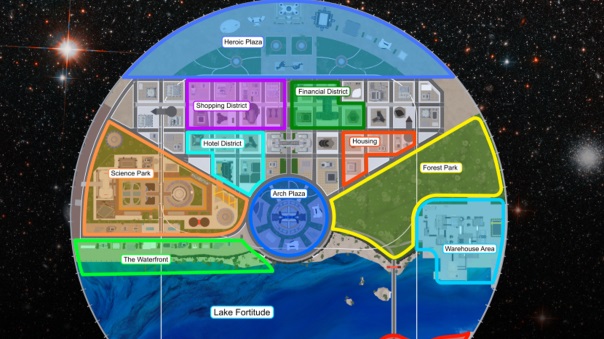 The Ship of Heroes team recently revealed the map for the playable area at launch, Apotheosis City. As one of the most important cities on the FHS Justice, it definitely benefits from its proximity to the engineering level. Built while still in Earth’s orbit, it is also one of the most Earth-like environments in the FHS Justice, including a body of water, green grass and vegetation, and a holographic Earth-like sky. It’s complete with a day and night cycle as well as seasonal changes to accommodate human residents. Of course, many engineers live in Apotheosis City – it also has a special problem with Prometheans who inhabit unmapped access ways under and through the city and the Ship at large. The Apotheosis City level is large – larger than the starting maps in City of Heroes and probably also SWTOR, for any of the first four game-entry worlds.  It is a large open world, not unbounded but large by modern game standards.  The devs have managed to avoid the dated look of endless prairie, desert, or similar-looking Soviet architecture that became common 10 years ago.  Comparing to modern games, Apotheosis City is about the same size as the map of Fornite’s Battle Royale, for example, but with much more urban space.

This map will be a tool in-game as well, to provide fans with the ability to zoom in and place some of the scenes they’re familiar with from their adventures – such as the Arch, the Science Park, Heroic Plaza, and the Warehouse District. The maps were created by the environmental art team at Ship of Heroes and exactly replicate the in-game maps from the beginning of 2018, which was used for the successful combat Alpha which was just completed.  The map will be periodically updated, and the next update will likely be in April of May.  Now that the first combat Alpha is over, the devs have a backlog of improvements to install the game, and some of these will affect the map.

The devs of Ship of Heroes understand that it can take an Indie team a long time to make a playable space feel immersive (it’s all in the details) so they have been giving regular updates on the persistent level o Ship of HEroes for the past fifteen months, and still have the rest of this year to complete the planned portion of the map before the start of the Beta.  Keep an eye on the newsletters, videos, live streams and Alpha activities to see how it is coming along.

The Devs of Ship of Heroes will be describing the zones in greater detail in future updates – for now player,s can speculate on the roles that each zone will play in Apotheosis City, the base level for launch where the adventure begins in Ship of Heroes.