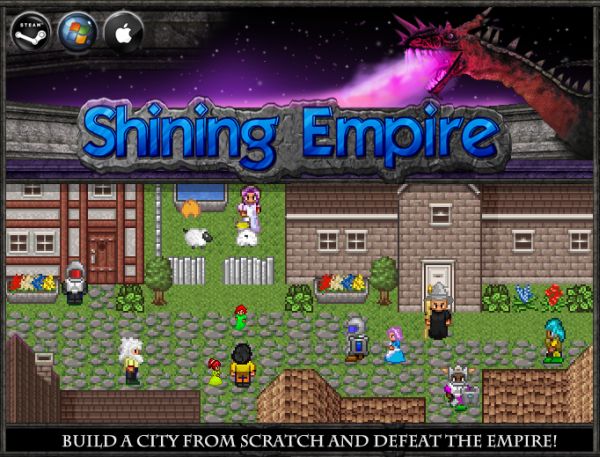 After a roller coaster start to 2014, Shining Empire is back on track and now headed to Xbox 360 and Xbox One. The game began as the spiritual successor to the Shining Force series (after Sega gave the axe to Shining Force Online last December 24th), but now it’s turned into a massive 1,000 hour plus RPG which steps way beyond the boundaries that Shining Force set. Now, Arcade County is ready to announce Xbox versions (360 and one) to accompany the original PC/Mac title.

“The trick was taking something that was designed for a mouse and getting it to work properly with a controller”, notes lead developer R. Mulvany. “Remember those Sim City 2000 console ports? We definitely don’t want to end up like that, so a lot of time was spent going through every possible way you could play with a controller. If we didn’t find the perfect scheme we would have just kept it on PC and Mac. Fortunately, what we have now is a lot of fun and feels perfect. Regardless of whether you use a mouse (on PC) or a controller (on Xbox) it’s going to feel as though the game was built specifically for that system.”

Mulvany has also revealed the size of the overworld map, and has compared it to other games. He’s careful to note that, despite it being massive, a large world doesn’t necessarily mean a great game.

“You could fit all of Skyrim and Cyrodiil (Oblivion) inside our world and still have room. It is a little ridiculous how massive it is. It doesn’t really matter, though. Cyrodiil was bigger than Skyrim yet the latter feels more dense to me. There’s a lot more to discover. We can’t just have massive fields of nothingness. We’ve got to pack in tens of thousands of landmarks and make sure the scenery is diverse. The player has to experience something new every time they play the game. Constant reward. The feeling of becoming powerful by the minute. That’s what compliments a large world. The worst thing you can do is spend all that time making something massive and it turns out to bore everyone.”

Despite surprisingly high demand, Mulvany says that there are no plans of releasing a Playstation 4 version, though he doesn’t rule out the possibility down the road.

“I’ve gotten a lot of inquiries, but right now it seems unlikely. It’s a pretty daunting task to develop for so many systems, so as of now I’m just focused on those that I’m most familiar with.”

Shining Empire is set to release later this year for PC, Mac, Xbox 360 and Xbox One (with a free iOS companion app which allows you to monitor your game remotely). The game will be available digitally for all platforms and a boxed version will be released for PC/Mac as well.

You can get more information about Shining Empire at www.shiningempire.com