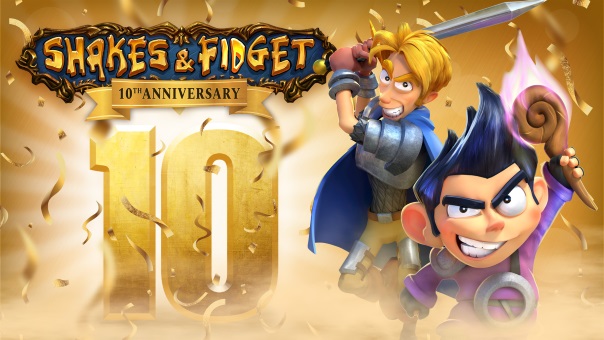 Shakes & Fidget is proud to announce it is celebrating its 10th birthday this week! Since 2009, RPG fans have been roaming this crazy fantasy world, clearing out dungeons, forming guilds, and even building their own fortress. Playa Games are celebrating with many special activities, and the Remastered version will be available to all players on all platforms this week. This Remastered edition has high-resolution graphics, a modern interface, and new hand-drawn graphics, not to mention a switch from Flash to WebGL and Unity.

Thre are also no fewer than 10 special promotions. There will be the “Continuous Loop of Idols” dungeon that lets players test their skills against famous YouTubers.  As an additional service, the Blacksmith now offers the reworking of epic items, giving them a whole new look. Hidden deep inside the mine, a very special item awaits adventurers: when found, the Holy Grail will display items still to be discovered for the Album of Meticulousness. To gain possession of the Grail, players must have reached level 85 and have at least 1,000 items in their album. There will be 10 achievements, 10 epic birthday items, and the ability to compete against 100 newly painted enemies. If that weren’t enough, from June 21st through the 23rd, all events will take place simultaneously. Further information can be found below.