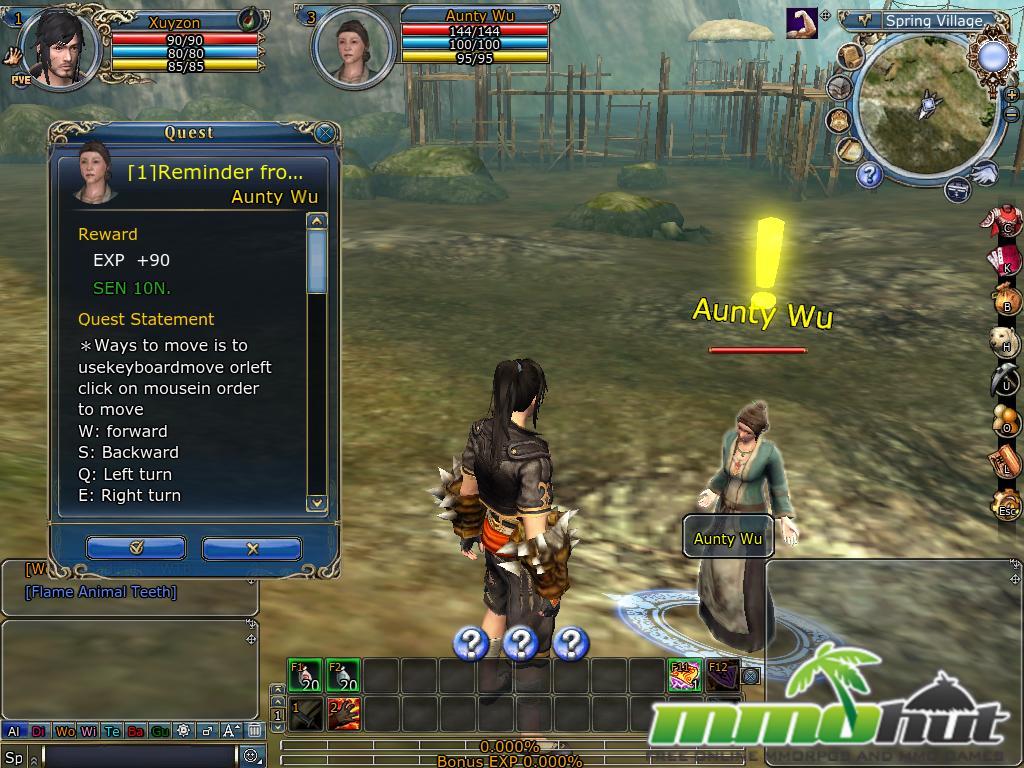 Scarlet Legacy is a 3D martial-arts themed action-packed fantasy MMORPG where players step into the shoes of a warrior on a quest to save the world from utter destruction. Complete challenging missions while venturing across a war torn land to aid the distressed Princess Scarlet. Destroy rebel camps, defeat bandits, and fight off droves of relentless monsters. Master the elements or art of kung-fu. Participate in intense PvP death matches and wage war against opposing guilds. Adopt a pet companion to assist in combat or form a close relationship with another fellow hero. Choose between 10 different crafting professions and create your own legacy.

Fred & the Magic Mirror, the Gameplay

Players start their journey in the little remote village of Spring Valley. Heroes are greeted in Chinese by NPCs named Aunty Wu or Fred and asked to perform various tasks. Originally an Eastern MMO Scarlet Legacy tends to get lost in translation. Quests which make up the majority of the gameplay are poorly translated. Despite the language barrier it’s still easy to navigate through the game’s interface with a bit of guesswork. Missions can vary from relaying messages back and forth to monster slaying. Some of the tasks incorporate props. Warriors must use a torch to burn down the rebel camp’s tents or set a cage to trap wolves. There are tons of quests to tackle which can make the gameplay feel repetitive at times. To break up the monotony periodically a magical mirror flashes. If a player clicks on it a chapter in the game’s story is read in Chinese accompanied by English subtitles. This unique storytelling feature resembles a hologram instead of the traditional animated cut scenes usually seen in MMOs. Much like a quest players are rewarded with XP or boosts for listening to the chapters. Although there’s a significant amount of grinding it can almost feel effortless with the auto-assist function. Similar to Battle of Immortals this botting system enables users to set health and mana to replenish itself. It also features a combat setting where players can select the order of skills or spells they’d like their hero to repeatedly perform during brawls. Once activated warriors will continuously slay villains. Gamers that prefer to be challenged might find these automated features to be a bit much. Players also have the option of manually performing skills during battles. 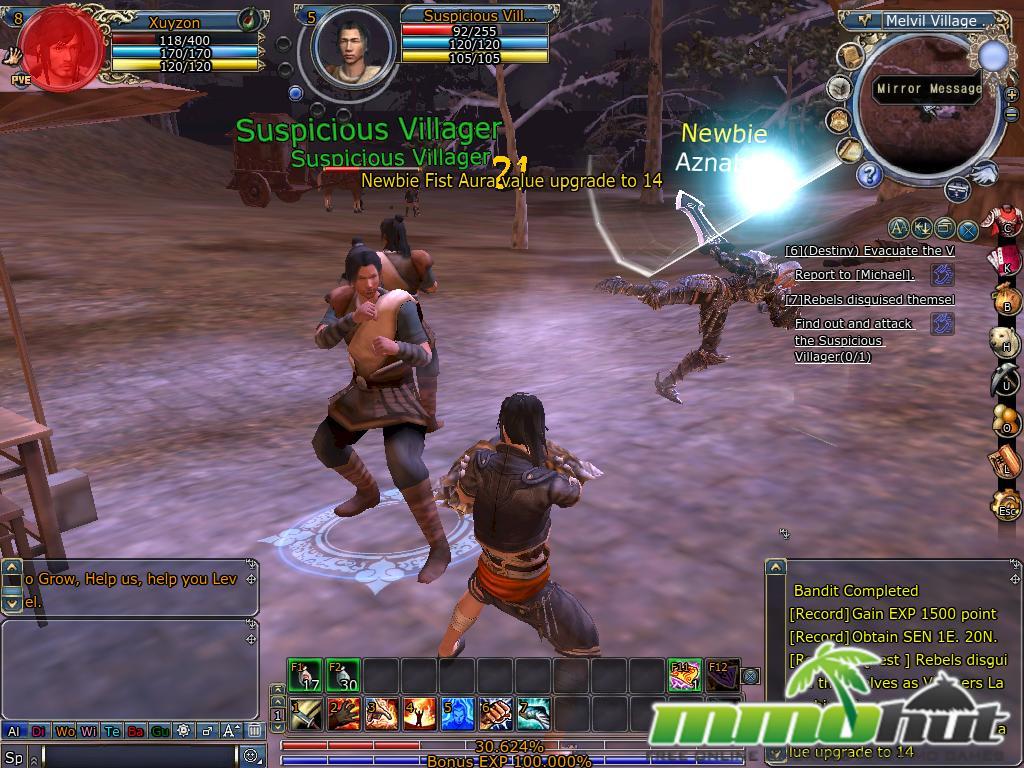 The combat animations are very fluid. Heroes can quickly execute spells and martial-arts inspired moves to destroy opponents on and off the battlefield. Maneuver around enemies using the WASD keys or point and click. Perform high flying double jumps with the space bar and hit designated hotkeys for initiating skills. The skill tree is decent. Players are able to slowly progress their character as they advance through leveling. There’s a nice mixture of PvE and PvP combat in this game as well. Players earn skill buffs and random items through the chain killing system by accumulating 100 consecutive kills. When a hero reaches level 20 they can enter the Arena Battlefield to wage war against other parties or guilds. Players can duel others if they have their PvP status on. Once a warrior reaches level 30 they can be attacked regardless of their status. The varied modes available are similar to Eudemons Online. Scheduled events give users the opportunity to play mini-games like Whack-a- Demon and compete with other warriors for rank. There are also six different instanced dungeons and a PK zone called the Bloody Village where anything goes.

Scarlet Legacy has a rather unique feature called the sworn tab. When a player has killed you in a duel they are automatically added to your enemy list in this section. Warriors can look up their opponent’s exact location in order to seek revenge or to avoid meeting the same fate for a second time. This option compliments the varied PvP modes available within the game nicely giving players the opportunity to control who they interact with. Blacklist annoying users disabling their ability to chat with you, quickly find party members to assist in brawls, and keep track of friends’ character’s status. There’s also a three-way matching system which enables users to form a romantic, scholarly, or family oriented bond with another player. Each individual relationship generates its own special item bonuses and buffs for accomplishing tasks together. Pets serve as useful comrades as well. These creatures can be summoned to fight alongside their bonded hero or used as mounts. Each pet has their own talent tree enabling them to level up and execute damaging blows or boosts to assist in battles. Warriors can acquire their own companions through the Item Mall, successfully completing certain quests, or by finding eggs during monster drops.

Rare pets, costumes, and equipment can be purchased in the Item Mall for players willing to spend some extra money. Buy a fighting alligator, crying puppet, or celestial corpse as a pet. Although all players start out with a horse they can invest in cooler mounts like a white scooter, magical broom, Wild Vicious Ox, and Flame Kirin. There are also a few themed items that give users the ability to customize their hero with Boxing Gloves, Angel Aurora, Samurai Helmet, Maid Outfit, Futuristic Armor, Sexy Swimsuits, Cat Ears, Kebab Flute, Frantic Guitar, Killer Mask, Bruce Lee Sunglasses, and even a Golden Blade. Despite the creative themes the selection in the Item Mall is relatively small for MMO standards. Only a few dozen accessories are available. The items in NPC shops scattered through the virtual world are limited as well. Food like shredded mutton, protection scrolls, crafting tools, ingredient packs, and weapons depending on a player’s class are sold for in-game coins. Snag a Newbie Sword, Akagane Dual Blade, Midori Hook, Kuroki Sword, Enchanted Bracer, Claw, or Sharp Dual Hook as a weapon. There’s not much of a selection which makes crafting essential for gaining powerful gear. Warriors can freely switch between professions creating their own potions, weapons, and armor. The integrated botting system also allows players to mine continuously in auto-pilot if they wish.

Overall, Scarlet Legacy is a solid fantasy MMORPG with a fun martial-arts theme. It features an extensive botting system, varied PvP modes, pets, mounts, and a match-making option. The polished graphics and fluid animated combat skills transport players into a world where kung-fu and magic exists. Play mini-games, participate in guild wars, and get married. Although the game’s translations could use some improvement the immersive storyline and endless quests keep players engaged. Rescue Princess Scarlet and save the world with your friends in this unique adventure. Similar to games like Warriors of the Three Kingdoms, Battle of the Immortals, and Eudemons Online it’s extremely addicting. Any fan of Eastern-style MMOs will thoroughly enjoy this game.