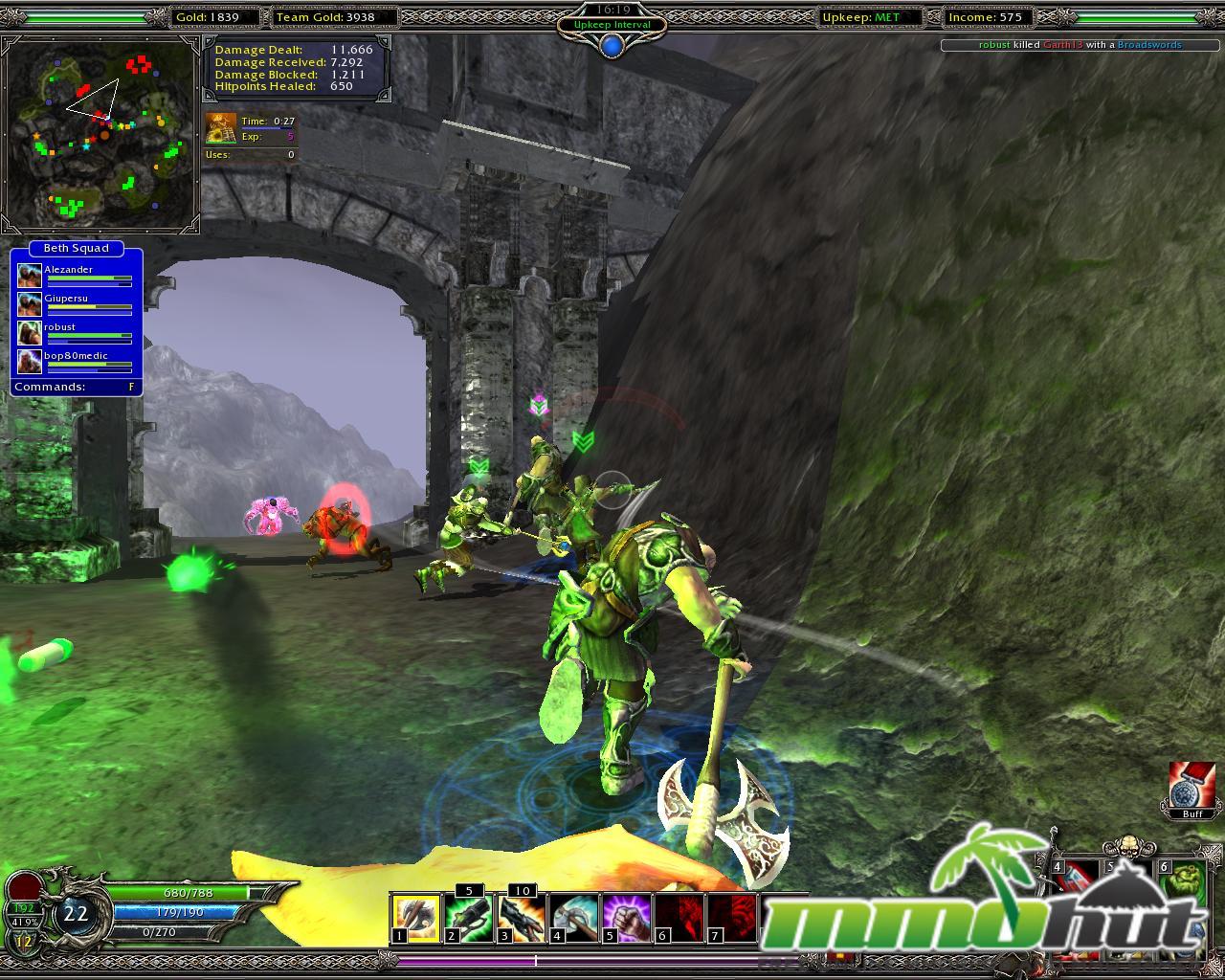 In my opinion, gameplay innovation is by far the most important part of every new game. When I play a new game, I want it to be just that – new. I want it to be fresh and exciting, I want to learn new things and spend time developing new skills. Unfortunately, most new MMOs released now days are nothing more than carbon copies of other games, and in most cases I find that I’m playing like a pro in less than five minutes. It looks the same as another game, feels the same as another game, hell, on a code level it probably is the same game – and it really gets under my skin.

PUSHING THE LIMIT
Thus, when a game like Savage 2 emerges from the darkest depths of the abyss with innovation literally bursting from the seams – I tend to get a little excited. You see, Savage 2 is my Shangri-La of MMO games, and for no other reason that it pushed the boundaries – and came out on top. Savage 2 combines elements from several different game types, namely, the RTS, FPS, and RPG genres, and it does so in the best possible way.

I’m almost certain that any fan of an RTS game like Warcraft 3 has been caught daydreaming at one point or another about a game that allowed you to control other players in an RTS style situation. Or imagined what it would be like to take control of one of those tiny units in a third-person perspective – and wreck havoc on the enemy base from the front row. It’s only now, in Savage 2, that those dreams have been fully realized, that players can take part in a game of teamwork, tactics, and strategy like never before. I know – I sound like I’m promoting the damn game – but as I said earlier, this stuff gets me really excited.

FINDING YOUR FEET
Okay, I’ve ranted for long enough. Let’s get down to business; let’s talk about the game. To make it clear right from the beginning, Savage 2 isn’t an MMORPG. It isn’t the sort of game that you’ll enjoy playing for 16 hours a day, and it’s not the sort of game that you need to spend a thousand hours playing before you compete with the best players. It plays out much more like an FPS game, whereby your success is derived solely from how well you play – much like a game of Counterstrike or Starcraft. As such, playing a game is as simple as selecting a server and joining the fray – although you may want to check out the tutorial first – to help you learn the ropes before you get in there.

The tutorial is voiced and easy to play through – and it completely covers all three major aspects of the game – shooting, attacking, and commanding. Don’t worry too much if you still feel a little confused when you’ve finished the tutorial, because the same voiceover help will be provided throughout the first few matches you play – providing helpful information whenever you use a skill for the first time, or encounter a new enemy.

ON WITH THE SHOW
Joining your first game will present you with a great number of different choices – the first being which faction you would like to play for this game. You can choose between the Humans – that focus on long-range attacks, or the Beasts – that have limited ranged abilities, but are deadly up close. Once you’ve selected a side, you’ll then need to choose whether you would like to command the team – a choice then will then lead to a vote – or whether you would like to play as a combatant, getting up close and personal. To begin with, it’s always a safe bet to leave the commanding to more experienced players, as it changes the gameplay entirely. If you choose to play as a combatant, your next step will be to choose your class.

At the beginning of every game there are three unit types available to both teams, a builder, caster, and melee attacker. And like any good RTS game, more become available once the required structures have been built. Of course, building them requires gold extracted from gold mines – and gold mines require players to secure, and defend them. The entire game plays out much like any regular RTS game would, except (with the exclusion of the commander who oversees the game from a birds-eye perspective), you’ll be right up close to the action, getting your hands dirty for the cause.

Attacking an enemy from long distance will see you playing in a first-person perspective, much like an FPS style game, whereas switching to a melee weapon will shift the perspective to third-person. Melee combat in Savage 2 is completely real time, and is based off a simple Rock, Papers Scissors formula – allowing you to attack, block, and jump attack to break an opponent’s block. It’s a simple system, but it’s hugely effective. 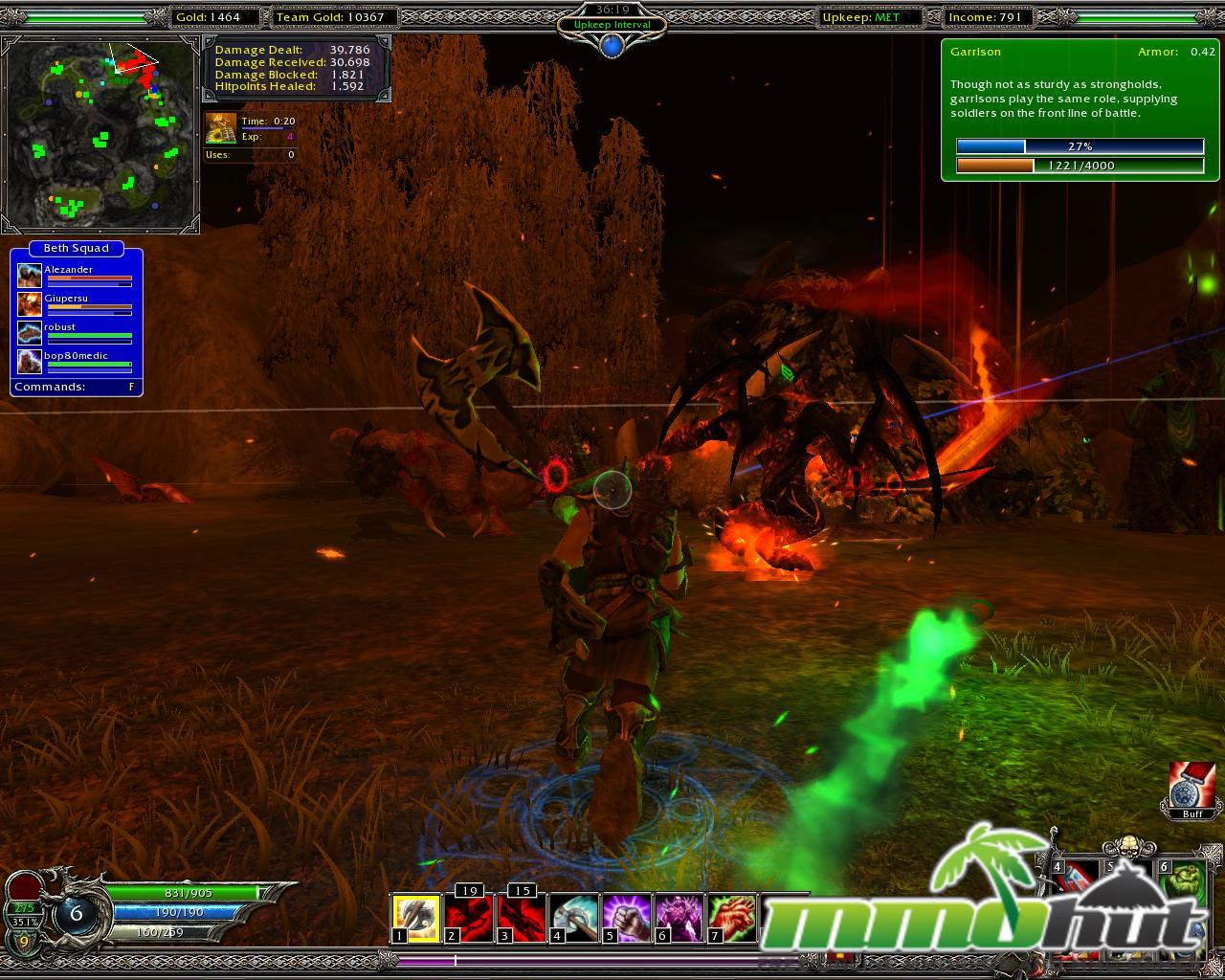 PROTECT THE SIEGE UNITS!
The main objective in every game of Savage 2 is always the same – destroy the enemy’s stronghold. Of course, with defensive towers and higher-class units defending the base can sometimes be easier said than done. Luckily, there are a number of different ways to assault an enemy base – ranging everywhere from siege units like the Behemoth or Steam Tank, to special Hellborne Units that require the souls of slain enemies to summon and control.

Many of the smaller units also come equipped with spells or abilities that when used correctly, can have devastating results – like the Human Marksmen that can stealth into an enemy base, and plant demo charges to blow it up. Or the Beast Druids, that can polymorph to look like an enemy, sneak into a base, and blow themselves to high hell – causing massive damage at the expense of their own life. There are hundreds of different ways to win a game of Savage 2 – and most of the fun is finding them out for yourself as you play.

FROM THE TOP
You’ll also find that killing opponents and structures will grant you both gold, and experience. Gold can be used to purchase higher-grade units, items to use during a particular game, and can also be donated to the commander to help build new structures and defenses for the team. Experience will help your character gain levels and grow stronger much like an MMORPG, but only lasts until the end of the match. Upon gaining a level, players can allocate skill points into the standard categories to help them style their character to their liking, and will gain new weapons and armor as they do. 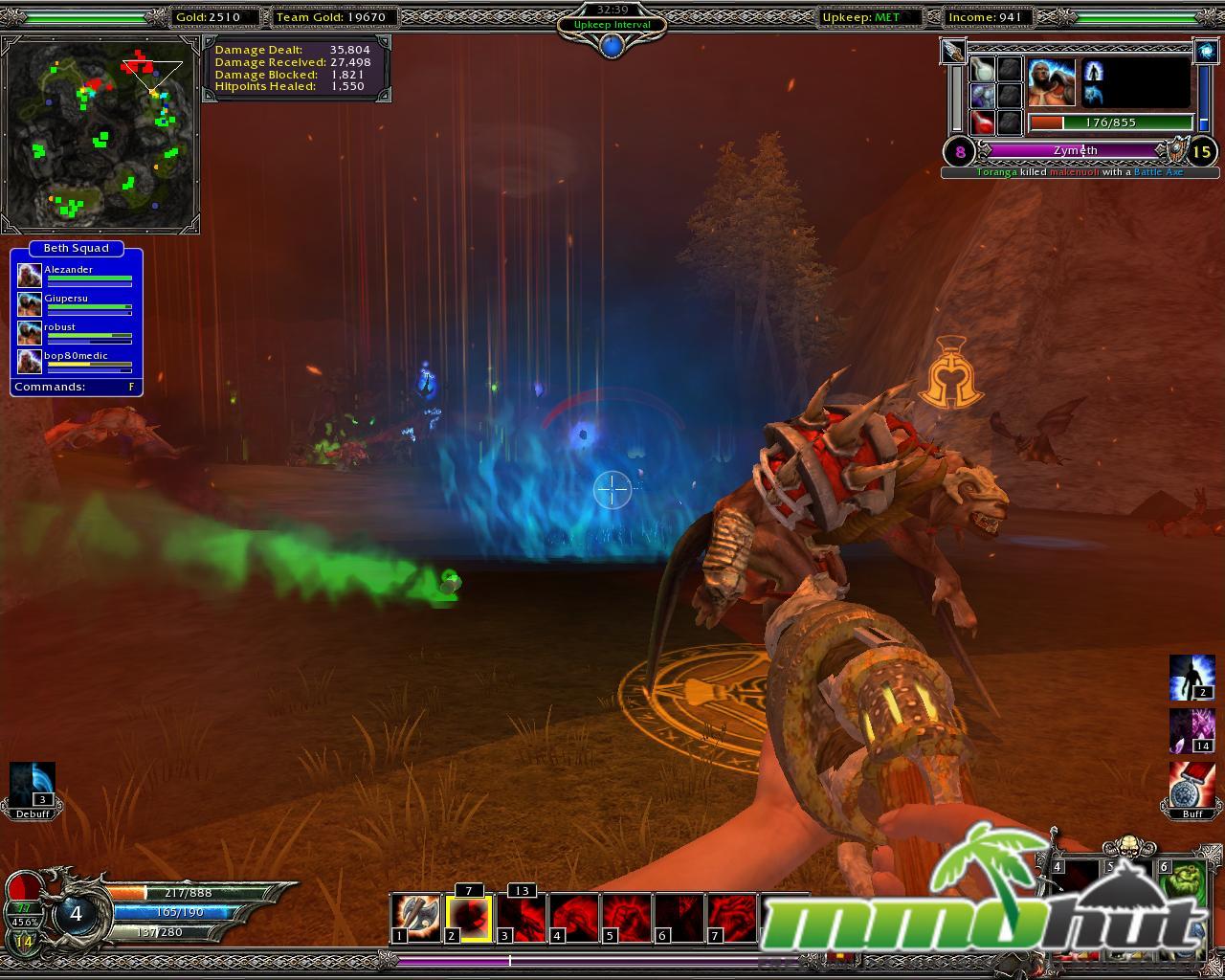 Playing as a commander is a much different game altogether – as you’ll be the one responsible for everything, and take the blame when you mess up. As a commander you can build buildings and towers, and also grant your player’s buffs to increase their armor and speed, heal or resurrect them – and even debuff enemy players to turn the tide of a small battle. It’s a god-like feeling at the best of times, but it’s not for everyone. Unfortunately, playing as a commander in a birds-eye perspective does have one major drawback – you wont get to see the gorgeous graphics in Savage 2 as much as other players, but you will learn the layouts of the maps quite quickly – which can give you the upper hand as a soldier later in the game.

MEMBERS ONLY
Lastly, like any good F2P game, there are additional options available for those that wish to pay – but fortunately none of them offer much of an advantage during gameplay. Upgrading to a full account, as it’s called, will set you back a one-time payment of $9.99US, and give you access to not only your personal stats on the website, achievements you have completed, and the stats of everyone else playing the game – but also to a replay of every game ever played, access to the special Hellborne Units, and access to the persistent item vault – allowing you to grab some special items that can help you turn the tide of a battle. It’s not a huge difference, but it’s a good one – and it’s cheap as chips.

Final Verdict: Excellent (5/5)
Savage 2 is a magnificent MMO title, and one that I would happily recommend to any gamer. It’s fast paced, furious, and gorgeous – and by combining elements from more than one genre, it’s accessible to a wide audience of players. This is a game that redefines fun, and doesn’t require twelve months of your life to experience it.