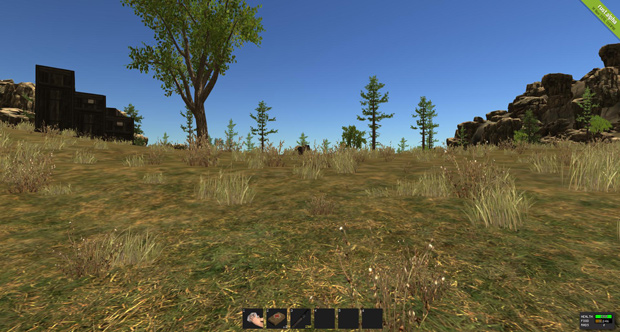 For a couple months I had this game on my radar, and finally after all the waiting I managed to get access to their alpha release. Rust is an open world MMO zombie survival game developed by Facepunch Studios. Rust is a game heavily inspired by a few games I loved a lot: DayZ, Minecraft and STALKER. And even though the game has a bit of everything, it is definitely unique in its own kind. I personally couldn’t wait to finally get my hands on this game, and I must admit that it’s been one heck of a ride ever since I have played.

Even though the game itself has been inspired by games such as DayZ, Minecraft and STALKER, I have to say that the features are blended so well that you won’t be able to say it’s straight out copying any of them. Its unique take works flawlessly as well. Rust is a sandbox game that takes the player through a deserted world where you will often feel alone. With that being said, the world is yours to explore, and you are free to do anything you want. But don’t relax too much as Rust can be cruel at times as the zombies and rabid animals will be the least of your worries. 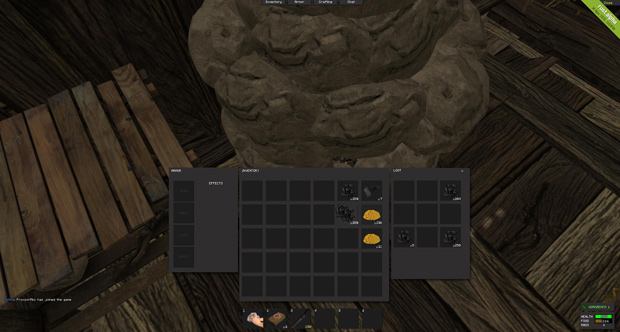 Rust has taken the danger from all of the named games above, and made it their number one priority for players to deal with. While other survival games tend to pit the player against the environment, it’s the community in Rust that tends to become your number one enemy. Are you out to make friends or take what you need by force? You never know for sure who you can trust.

As a new player, you spawn randomly somewhere on the map, and no matter where you go, you will find life. Either in the form of animals, zombies, or structures placed there by other survivors. You start out with just a couple items, a stone to harvest any resources with, a couple med kits and a torch. Rust itself is heavily based on the crafting system, meaning people that prefer run and gun survival games may feel hindered while true crafters will be in their element. All the hard work learning and practicing recipes is rewarded in Rust, but be careful not to get too focused on your craft as losing track of your surroundings is the fastest way to get ambushed by a greedy survivor, losing all your materials in the process.

Your first priority when starting the game is simple. Make a small hut and gather some food before things start getting dicey at night. This is where you will use your rock; this simple tool can be found everywhere in the world of Rust and is used to chip away at bigger rocks to find better rocks! It’s basically like Rockception, and quite confusing for a new player of Rust. You can also bash your rock against a tree for stacks of wood. When you have gathered enough resources to get yourself a simple home, it is time to hunt the wildlife. You will find pigs, deer, wolves and even bears roaming around that are able to give you cloth and meat. Obviously you will need a different set of tools depending on what you hunt, with wolves and bears being particularly challenging to take down. 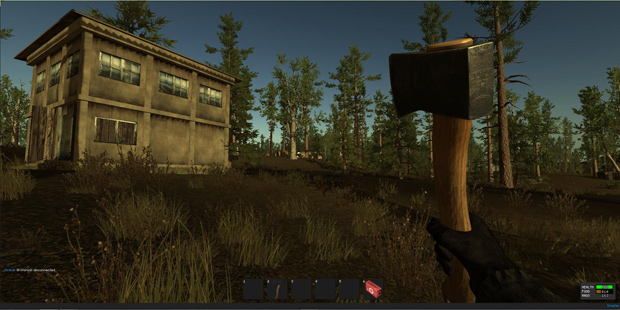 Like I have said before, the greatest danger is not the game itself, it’s the players playing it. Many times I have felt like I was kicked in the nuts while just minding my own business trying to survive. The zombies and radiation are a minor inconvenience compared to the jackals behind the keyboard of the other survivors. From randomly getting clubbed over the head to being ambushed on the road, to being given free materials by random survivors passing by on the road, the range of interactions with other players can be quite vast. Unfortunately the Internet proves once more that the majority of people playing games are just dicks.

I know it’s a bit harsh to say, but I’ve never been more terrified from moment to moment in a game to the extent I was in Rust. One time I finally managed to get myself a proper home, not a shabby hut that barely stands. I was finally cooking my meat on my campfire in my own home, placing my sleeping bed on the floor when someone knocked on my door. It was someone who lived in the area and was wondering what I was doing in his area. Since I had shared amiable trades with the local players up till now, I introduced myself as a new survivor trying to set up a safe base to live in. Unfortunately he didn’t like this and wanted me out of his area. I obviously was a little confused because of this; what could my presence there possibly do to bother him? I wasn’t near his home at all. Unfortunately I had no say in this and he brought some of his buddies over to bash my front door down with their pickaxes. It didn’t take long for my door to be kicked down and my house warming party to begin. Needless to say my shiniest rock was no match for his shotgun. It didn’t take long for me to transition my playstyle into one of the dozen grumpy players that trust no one and kill others on sight.

Rust is definitely something different. Even though it focuses itself on crafting and surviving, the social interactions and permadeath element make player interaction the most intense focus of gameplay. The players influence the world, and since every server is different, I had a lot of different encounters with people. Most of the people I met were friendly, but the small amount of players that harmed me on sight taught me an even wiser lesson, do not trust anyone in Rust. I moved myself to a safer area, one near the coast where not a lot of people come, and made myself a bigger fort complete with locked storage boxes to keep my collection of items hidden away from thieves.

Rust is definitely a game I will be playing more of in the future. It’s still in very early alpha testing so there are plenty of bugs and most everyone is running around naked, with the occasional server resets that will set your progress back a bit. But if you don’t mind being part of a game under heavy development, Rust is worth the trouble of getting into.