The Russia-Ukraine War: An Interview with Game Developer Weasel Token 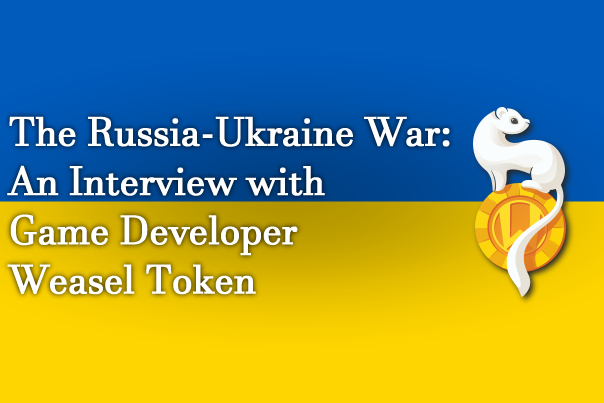 The Russia-Ukraine War has been capturing international attention and concern. This has even extended into the video game industry, with the IGDA even officially issuing a statement condemning the Russian invasion. We also stand with Ukraine in this crisis.

In a rare opportunity, we were able to interview Alex Molodkin, co-founder of the Ukrainian game developer Weasel Token, via text during this crisis to offer some insight into what their experience is right now.

Thanks for taking the time to answer these questions for our readers, especially given your current situation. Can you give our readers an idea of the general atmosphere right now where you are?

Thank you too for this opportunity! Everyone here moved to live in the hallway for the time being since it’s safer than the rooms with windows and outer walls. Every day feels like playing a kind of russian roulette — you’re fine until you lose once, and that could happen any moment or not happen at all. The feelings are rather mixed, obviously we’re depressed that our people are stuck in this madness, but at the same time we’re optimistic because our armed forces, territorial defense, and everyone else are putting up a hell of a fight. We are proud of the unity of our people and believe in our victory!

Is your team staying together or have you spread out while keeping contact with each other?

We’re lucky that our core team is just two people, and we’re a couple, so we’ve been living together for years. Unfortunately, our composer that we’ve outsourced all of our audio work to is a Russian girl, so while we’re keeping contact, it’s very unclear how and if we’ll be able to keep working together in the future. Some Russian people we know are amazing and very supportive, including said composer, so if it remains possible after the war ends we definitely don’t want to cut ties with people just because of their nationality — good people will always be good wherever they’re from.

When did you start preparing to move/evacuate? Did you create any specific plan, or are you just taking each day at a time?

Before Putin’s speech threatening us with “true de-communization” on 21st of February, we still hoped the conflict will be somewhat localized and smaller in scale. After that, the hope dwindled. However, we still had little chance to evacuate with a family of four, and especially due to my grandmother’s issues with legs. So we’ve thought through what we’d pack into our evacuation bags, checked out the map for nearby shelters, but decided to stay home, even if in a hallway, for as long as possible because living in some shelter would be impossible for prolonged periods of time for my mother and grandmother. No specific plan other than that. If the worst happens, we definitely will do everything to stay out of “Russia”, some of their laws and views are medieval and impossible to live with. Poland and Portugal were brought up in our discussion regarding possible relocation places. But even if we are not some sort of super patriots, we’ve always loved our country and always planned to stay here, so that’s what we’ll do for as long as possible.

Are you in contact with other game developers or industry members within your area? How are they doing?

We are! Everyone is fine (as much as it’s possible in this situation), most just escaped Kyiv in the western direction since it’s safer there.

Are there any organizations helping your team get through this crisis? What are the best orgs we can support to further assist you?

We’re relatively fine on our own so far, so we try not to bother anyone. But yeah, there are many organizations that would benefit from any and all international support! First and foremost, here you can find all the info on how to transfer money in different currencies to the Armed Forces of Ukraine:

And here’s the info for the Save Life fund:

Outside of staying alert, what kinds of things are you doing to pass the time?

Most of the time we’re just reading the news. It’s hard not to when your life kind of depends on it. When there are some less active periods with less things happening, it’s a bit of everything. My partner Tay has almost gotten all the Steam achievements in Hades, and I’m booting up various games on my phone (my PC is packed into an evacuation bag since I’d likely have to leave it behind otherwise during a sudden evacuation). But it’s hard to concentrate on something, honestly.

How difficult is it to remain creative during these times and how do you manage to do so?

Pretty much impossible. The most work-related thing I’ve done for our game is talking to the community in our Discord server, especially when they were solving the ARG (alternate reality game) hidden in the game demo that was a part of last week’s Steam Next Fest. Anything else is too hard to pull off in this oppressive atmosphere, the thoughts just stray back to the same topic again.

Do you think this experience will have a creative impact on future game creations for developers in that area?

Yes, we’re sure that this whole experience will have a big impact, but the way it transforms the creative products of local game developers is surely going to be very multi-faceted. Some may create patriotic games to share our culture with the world, some will try to help people get through difficult experiences with peaceful games, and some will likely promote how terrible war as a concept is. Our current project, Puzzles for Clef, was started as a cozy and peaceful game to help people stay sane despite the pandemic, self-isolation, etc. There are no enemies or danger in it, just a world you explore and solve puzzles in without any risks. Now the concept is even more important to hopefully help people soothe their wounds and minds after the war ends.

What message would you like gamers around the world to see right now?

You’ve certainly heard many things about how terrible war is recently, so we won’t be echoing everyone else. Since we’re talking to gamers specifically, we’ll just ask you to pay attention to the people behind the games you like when you can. They’re wonderful people who want to enrich your life, to support you through harsh times, so please support them back! And especially support the Ukrainian developers, they need your kindness a lot right now.

Thank you again for taking time to let us connect and share your voice with the world. We all hope for your safety and that this situation resolves quickly and peacefully.