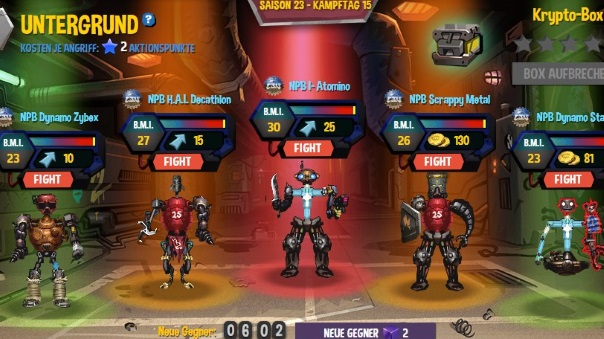 Don Esteban’s criminal organization has been revived, and with this in mind, RoboManiac releases Update 1.3: Underground! In the underground, Don Esteban organizes special fights, where the strongest bots of Centerra meet and duke it out for a piece of Don Esteban’s wealth. The pay is way better than an average street fight, but if a bot manages to beat all five of their challengers, he receives a special prize: The Crypto Box. Also, a new “ReSkill” feature has been added! Everyone makes mistakes, and for a small fee of Platinum, players can reskill and get all of their assigned attribute points back! Weapons and bots no longer have a damage range, but a fixed average damage. Furthermore, there will be a varying damage range in battles depending on this average damage. With this change, the fully packed interface of RoboManiac is streamlined. There have also been a few additional balance improvements to the gangs in general, such as gangs only being able to attack another gang three times per season. This should prevent a weaker gang from simply being harassed over and over by a stronger force. This and more await in this latest update for RoboManiac!