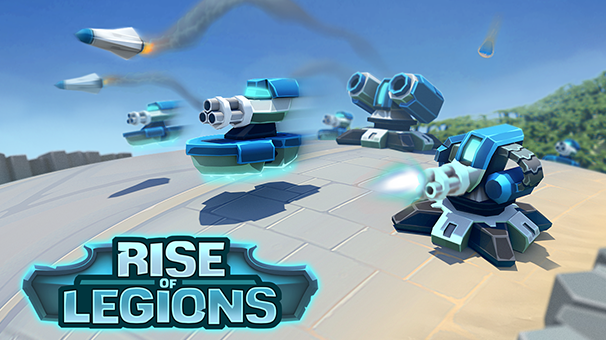 I have to admit, I haven’t had the best experience with a lot of MOBAs. I tend to find their communities toxic and just move on, because there’s so many better things to do with my time than swim in a fetid pool of human sewage. Rise of Legions (ROL), released on August 30th, 2019 by three man development studio Broken Games, is a free to play MOBA with deck building aspects. I found it a refreshing change from the usual toxic atmosphere of multiplayer online battle arenas.

RoL also plays quite different from other MOBAs. In the standard MOBA, whether isometric games like League of Legends or Defense of the Ancients 2, or one of the third person based titles such as SMITE, you typically have a single hero that you play, who you then move around the battlefield in an effort to defeat minions, towers, and ultimately your opponents’ base.

This is a quick one off match in the stone league. It’s over pretty quick, but gives you a basic idea of the flow of the game.

Instead of selecting a single hero in Rise of Legions, you create a deck of up to 12 cards. These cards may be a selection of spawners, summons, spells, and buildings. There are four colors of cards, similar to the deck colors in Magic the Gathering: black, blue, white, and green (Sorry, no red deck wins Ragachak!)

Each color set of cards has its own theme as well: black cards tend towards necromancy, undeath, and ice spells; blue decks will feature robotic units, turrets, and spells that manipulate time and space; white decks feature holy priests and magic, and armored units with shieldblock abilities; and green cards will feature nature based cards with rooting entanglements and plants that can grow. These are generalizations, and there are many ways in which the decks overlap.

Summon type cards will create one or more creatures of a given type on the spot where you click. This spot must be within range of your towers, which will appear as green marked ground when you click on the summon card. Buildings must similarly be cast with this range, but unlike summon spells, buildings are static and cannot move of their own volition. However, a relocate spell can move buildings. Spells are not limited in where you cast them, but will typically have a specific target type, such as enemy units, friendly units, or an area of effect.

The final card type, spawners, work a little differently than summons. A placed spawner will periodically create a unit. For example, the basic black deck unit summon skeleton will also have a skeleton spawner card. This card, once placed, will create skeletons.

Placement of spawners can only be done behind each base’s crystal, in the spawner zone. There are twenty squares which will light up when powered. During game play, one of the twenty squares will be randomly selected every two seconds. When this happens the glow will fade out and, if there is a spawner on the tile, the summoned unit will be placed on the field. If you place a spawner on a glowing tile, it will immediately activate and spawn the unit, even at the start of the game.

Here you can see how the spawning area works. Notice at the end when I place a spawner on a grey tile, nothing spawns, but when I place one on a glowing tile, the unit spawns immediately and the tile goes grey.

In order to place cards, you must have enough of the appropriate resource. Spawners require essence, and all other cards require mana. Mana will replenish over time. Essence is gained whenever you play a card that uses mana, or when you gain excess mana past your maximum mana pool. This can be a solid tactic if you’re planning a major push.

The only hard and fast limitations to creating decks are a twelve card deck limit and the maximum of two mana colors in the deck.  You may certainly attempt to make a deck with twelve spells, but that deck is likely to be extremely ineffectual. Instead, the suggested mix is somewhere around three spawners, three spells, and the six remaining cards split between buildings and summons, depending on your deck type (some colors simply don’t have any buildings to speak of).

Tooltips are invaluable in RoL.

The types of cards available vary widely, especially between color types. There are also a great number of different rules that may apply to each card. Thankfully, if you ever want to know what a given card does, you may mouse over the card to see a tooltip. The tooltip will show abilities, as well as effects those abilities may apply, defined in a very concise manner. I found these tooltips make the game very user friendly to new players, and makes it easy to find and absorb information.

Advancement of cards is also possible. Each card has a level and gains experienced when it is used in matches. You may also grant a card experience by sacrificing another card to it. When a card reaches level 5 in its tier, you may then ascend the card. Ascending a card increases its maximum charges, allowing you to summon that unit more times in a row, provided you have the required mana.

Believe me, considering you get a free card every time you play a match, plus a number of cards for completing daily objectives, you will have plenty to sacrifice. The daily and weekly quests give you a large amount of resources in the game, including crystals, the game’s premium resource.

I’m sacrificing units to grant experience points to another. Since this is my first unit promoted to silver, I get an achievement reward and some extra coinage!

I absolutely appreciated the fact that I didn’t find any pay-to-win elements in Rise of Legion. Everything that can be purchased from the store can also be earned through gameplay. Every card in the game is unlockable through the card vendor.

Each deck has an advancement tree in the card vendor that goes through the tiers: stone, bronze, silver, gold, and crystal. In order to unlock the ability to buy (or obtain randomly from chests) a given card, you must first unlock a previous card, and also perform a special quest, such as “kill 20 frozen enemies with a unit that has predator: frozen”. I found these little side missions a fun objective.

There are a number of cosmetic options that may only be purchased with crystals, but RoL is reasonably generous with granting crystals through gameplay as well (you get some for doing weekly quests, as well as each time you level up). I’m quite familiar with the gambit of predatory business practices in the free-to-play game industry, and you don’t even see any of these in the shop.

In this match, I’m playing with one of the top tier performers, Perotan. He’s controlling the green and black team, while I’m playing with black and blue. He’s also got some pretty fun skins, so keep a close eye out for snowmen and lollipop reapers.

I mentioned before that Rise of Legions has a pretty great community. Their Discord sits at a modest but solid 500 players and when I went in looking for people to do 2v2 matches with it was easy to find a partner. They also have a friendly and responsive community manager (BrokenGuerthal in channel) who is dedicated to making sure that the game’s population remains non-toxic.

Aside from 2v2 mode, there are several other game modes to play. Quick match is a basic 1v1 game against another human player (or, if none are available, an AI bot with a pre-genned deck, at least in stone tier). There are also versus golem modes, which are great for trying out new deck combos. These allow you to play against an AI controlled force of stone golems, which are a sort of 5th party deck with basic units that players may not choose. You may play solo against golems, or in 2 player co-op matches. You can even play custom matches of up to 4v4 human players.

There are also leaderboards for most match types, including the golem matches (but not custom matches). Leaderboards reset monthly, and show your ranking based on matches won. In the case of golem matches, leaders are shown with the lowest time required to beat a golem opponent.

I had quite a bit of fun with Rise of Legions, and this is one of those games that I’ll keep around post-review. I might not dedicate a ton of my limited spare time to the game, but I can definitely see hopping on to grind out dailies and weeklies on a regular basis and building up my decks. I give RoL 4 out of 5 shuffles due to its innovative take on MOBA games, simple but clean graphics, solid community, and fun gameplay lacking in noticeable bugs.

Note: A key was provided for purposes of review.