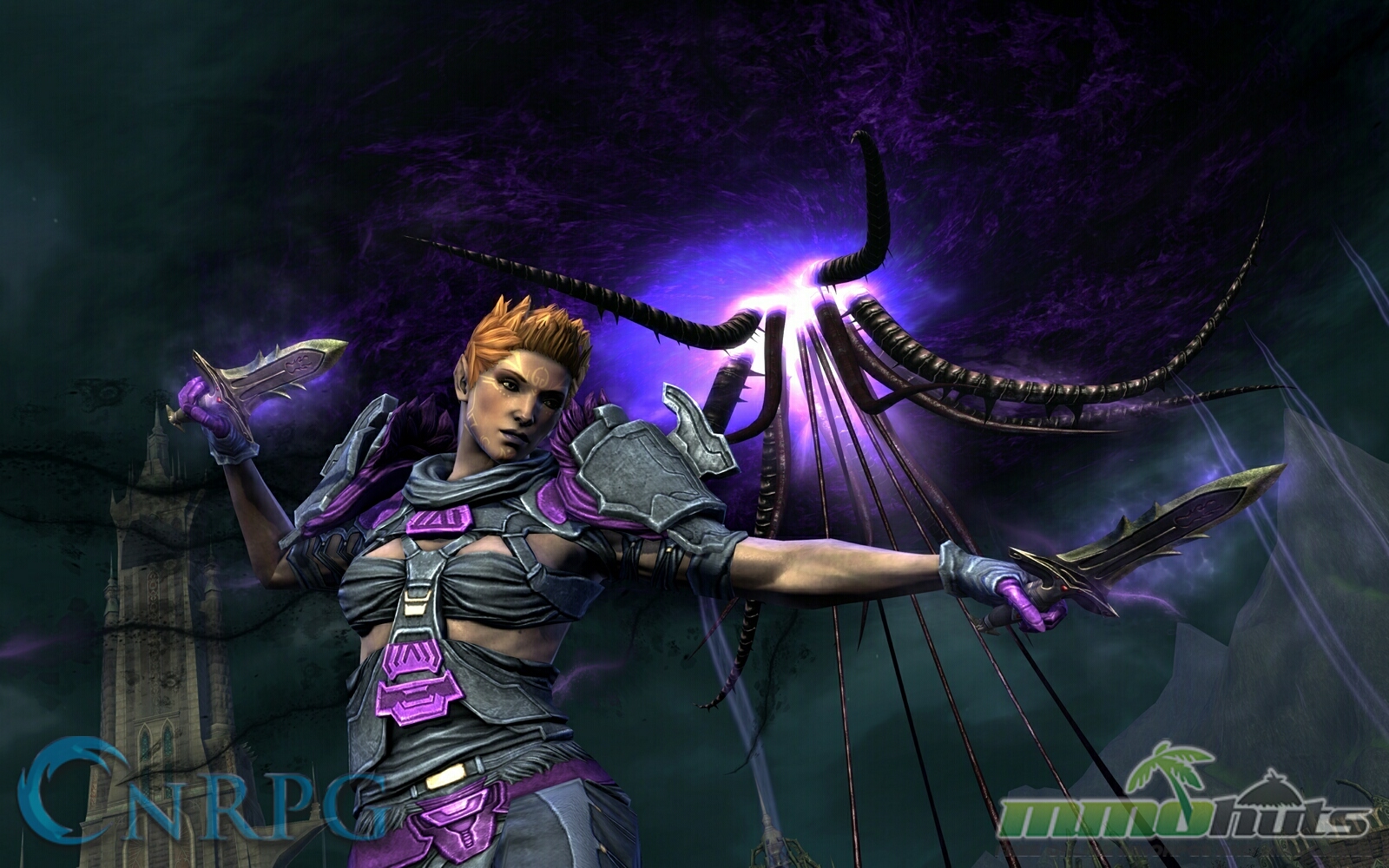 I had the pleasure of sitting down with the developers behind RIFT a few days ago for a press feed that featured their newest content. I’ve played Rift before, and I always wanted to like it, but something about it just didn’t stick with me. The same can be said of most MMORPGs, so that may be a personal problem I have with the genre. There’s no denying that Rift’s class system and visuals are wholly unusual, and the changes being rolled out in their next patch were interesting enough to even get me to consider giving the game another try. A new soul for each class, a carnival, a gryphon called ‘the blueberry’, and a flaming snail mount? Okay, I’ll give it a look.

One of the biggest changes hitting the game in patch 3.6 is multicore support. For those of you like me who needed clarification as to why that’s a big deal, I can explain – multicore systems are common now, but weren’t at the time of Rift’s release, so they weren’t supported in the engine. Now the game has seen a 25-35% increase in overall performance for players using multicore systems (which is basically everyone). This is a serious quality-of-life upgrade and one that’s been a long time coming for the game. 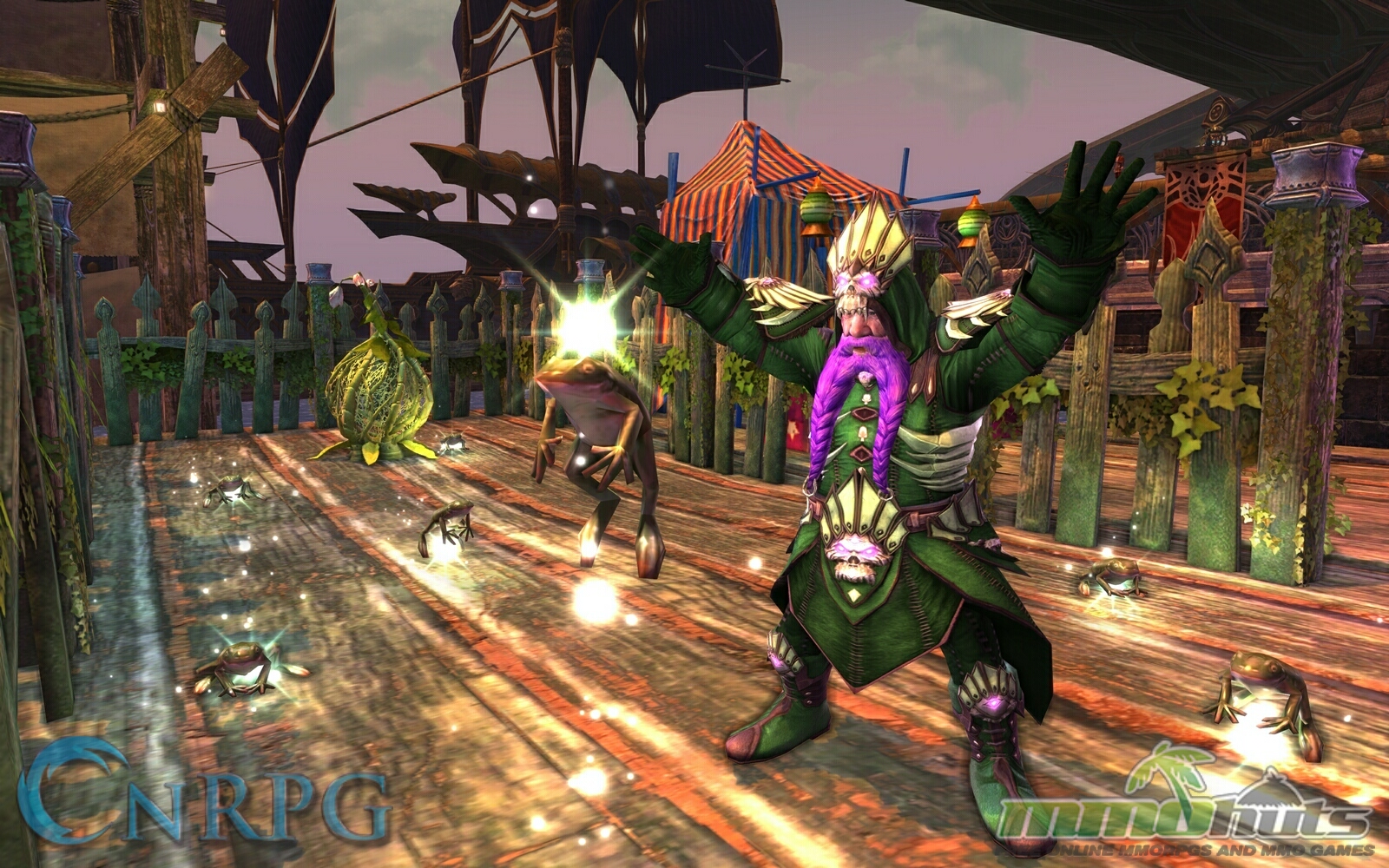 Patch 3.6 is also going to be reintroducing the Carnival of the Ascended, which is an in-game fair that celebrates the players (the ascended) through quirky games and the redemption of prizes. It’s a fairly straightforward affair, with games like… balloon stomping! Roulette! A drinking game (which you don’t have to accompany with shots in real-life, but you could if you wanted)! Collect jumping frogs! Frog… artifacts? A fashion show! Yes, the game has a great costume archiving system, so players will be eager to show off their fine outfits for the judges.

I also saw a snail mount with flaming racing stripes. I can honestly say I’ve never seen one of those in an MMORPG before. Apparently the snail with the flaming racing stripes is awarded to players for doing community feeds, streaming, and websites. What a clever way to encourage community promotion and participation, you savvy developers. Kudos. 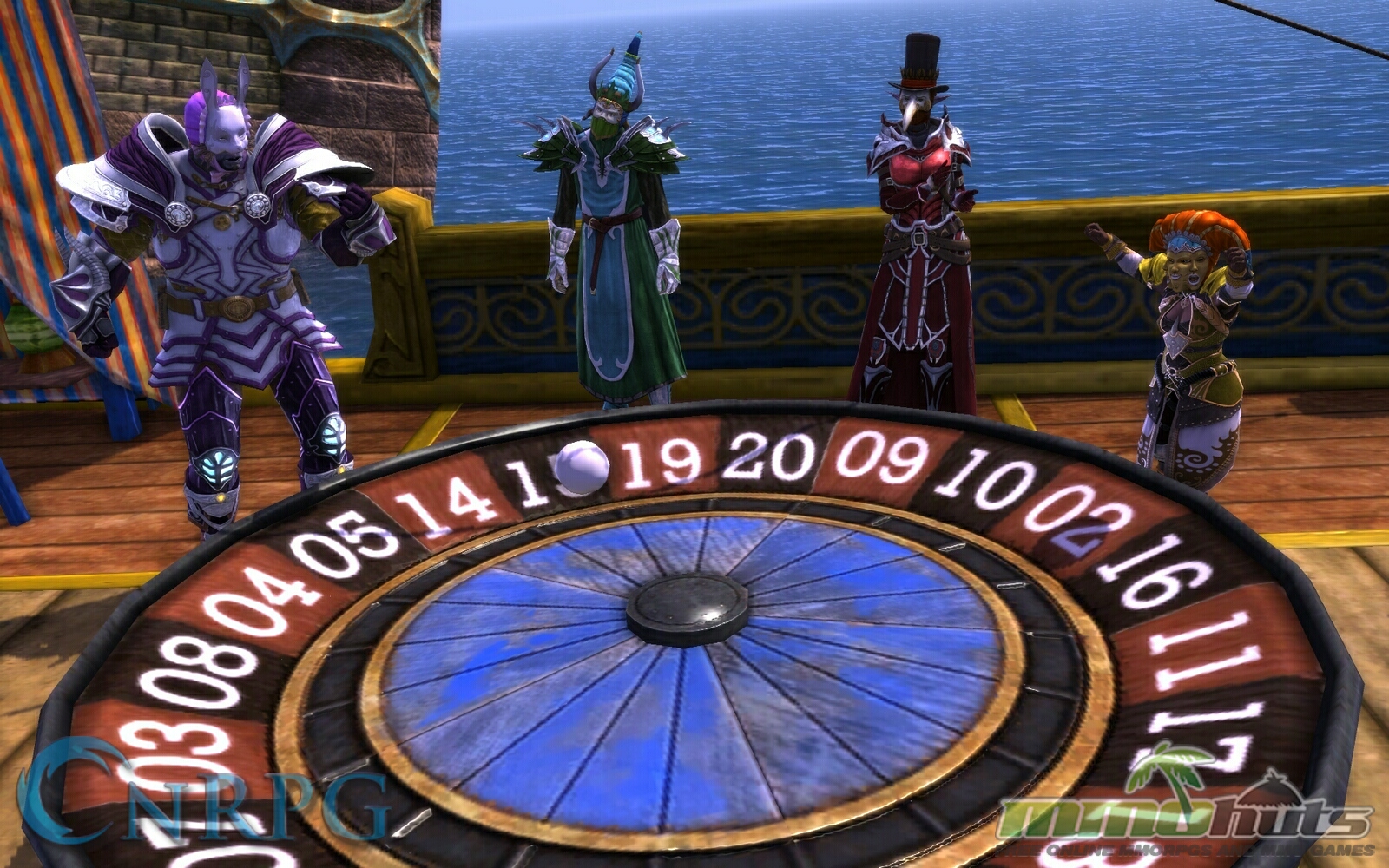 They’ve added a new daily rewards calendar, which is standard fare for free-to-play games these days. You log in, you get a reward, and the rewards get better the more you log in. The rewards in Rift seem especially generous, offering in-game boosts, premium currencies, and more. On top of this, they’re working in an improved planar attunement system, which allows players to continue to progress at max level through filling out colorful attunements that give small stat bonuses that do add up.

And of course there are new souls for each calling in the game. These souls can be folded in with two other souls to make a unique class – Rift’s class system is a bit too complex for me to explain at length here, so just think of each soul I’m about to describe as its own class.

There’s the Shadeborn, which is a rogue soul. Single-target DPS with a twist – you can mark a target and then when you deal damage to a different target, that damage carries over to the marked target automatically. A neat way to murder two people at the same time; how about that? 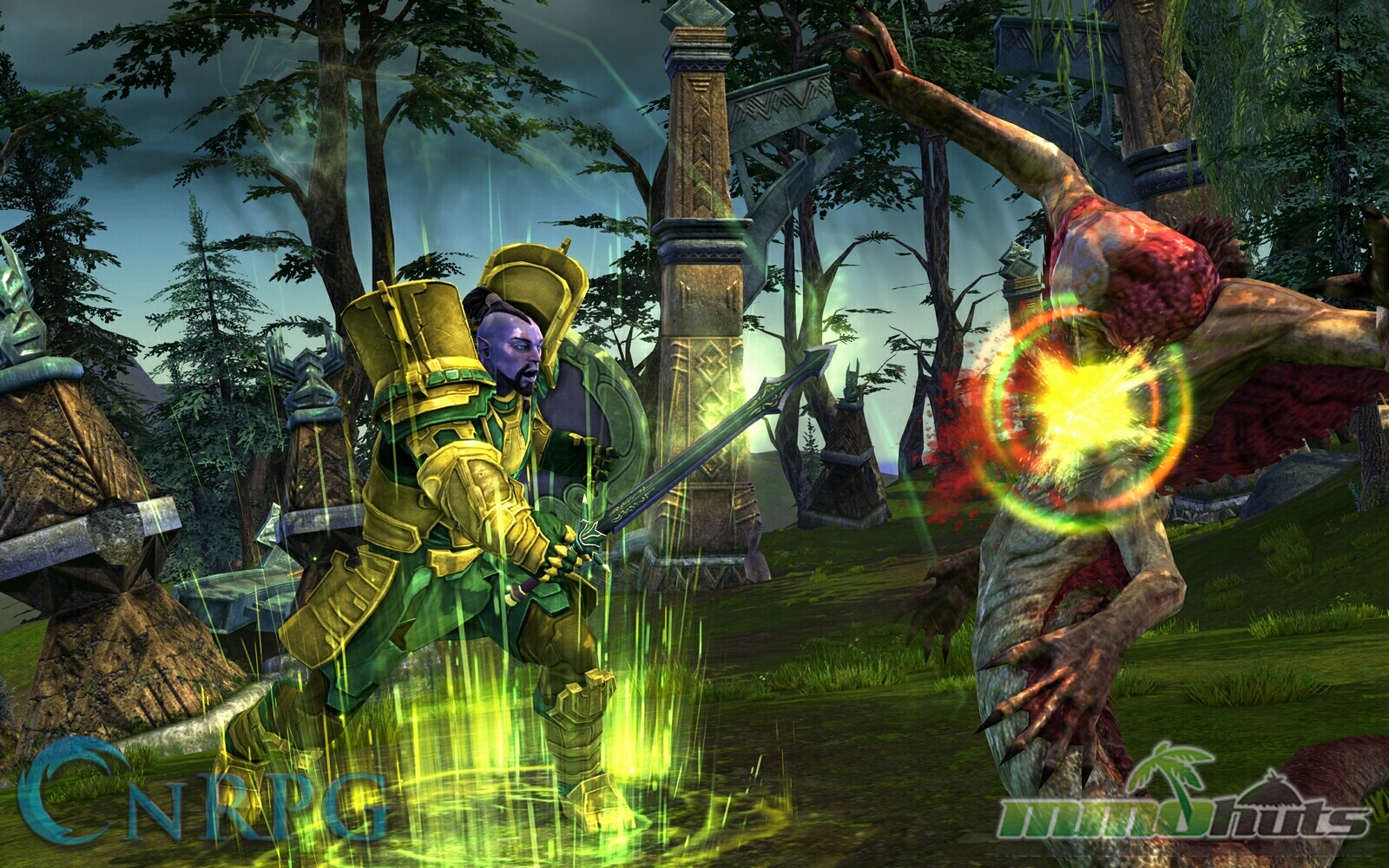 You’ve got the Warchanter, which is a warrior soul, and a healer, but a weird healer. It’s like… the rogue of healers. Warchanters have a shallow pool of energy that regenerates fast, and its heals are big, bursty blasts of shouting that can take a person from bleeding out the neck to fit-as-a-fiddle in half a second. But don’t overdo it, or you’ll blow your lungs out. This class can also deal damage to nearby enemies by healing friends, because shouts are loud, and demoralizing – Lord of the Rings Online taught us that lesson.

What’s a Runeshaper? It’s a Cleric soul, obviously. Single-target caster DPS, lots of secondary support utility mechanics, big and heavy cast-time spells, creates zones to speed up friends and slow down targets… blah blah blah. A super-neat battlefield shaping tactician sort of deal, with the buffs and the debuffs and the zones and the whatnot. And then after that there’s a Mage soul called the Frostkeeper, which is a frosty healer that uses barrier mechanics extensively. Everybody loves frost-themed classes, right? Those are always the most popular. Go Frostkeeper.

And finally there’s a new Primal soul called the Maelstrom. Primal souls are special high-level ultra FINAL FORM souls that I guess unlock at some point, I wasn’t super clear on that, but you know the drill. So the Maelstrom is kind of cool because it has these really, really, really huge cast times but hits like a nuclear freight train. More games should do that, and maybe throw in some Gandalf-esque chanting and other wizardly pageantry. Games don’t let you feel like an epic wizard enough. They also have a DoT that does double damage on each tick, so that gets a little crazy after ten seconds. 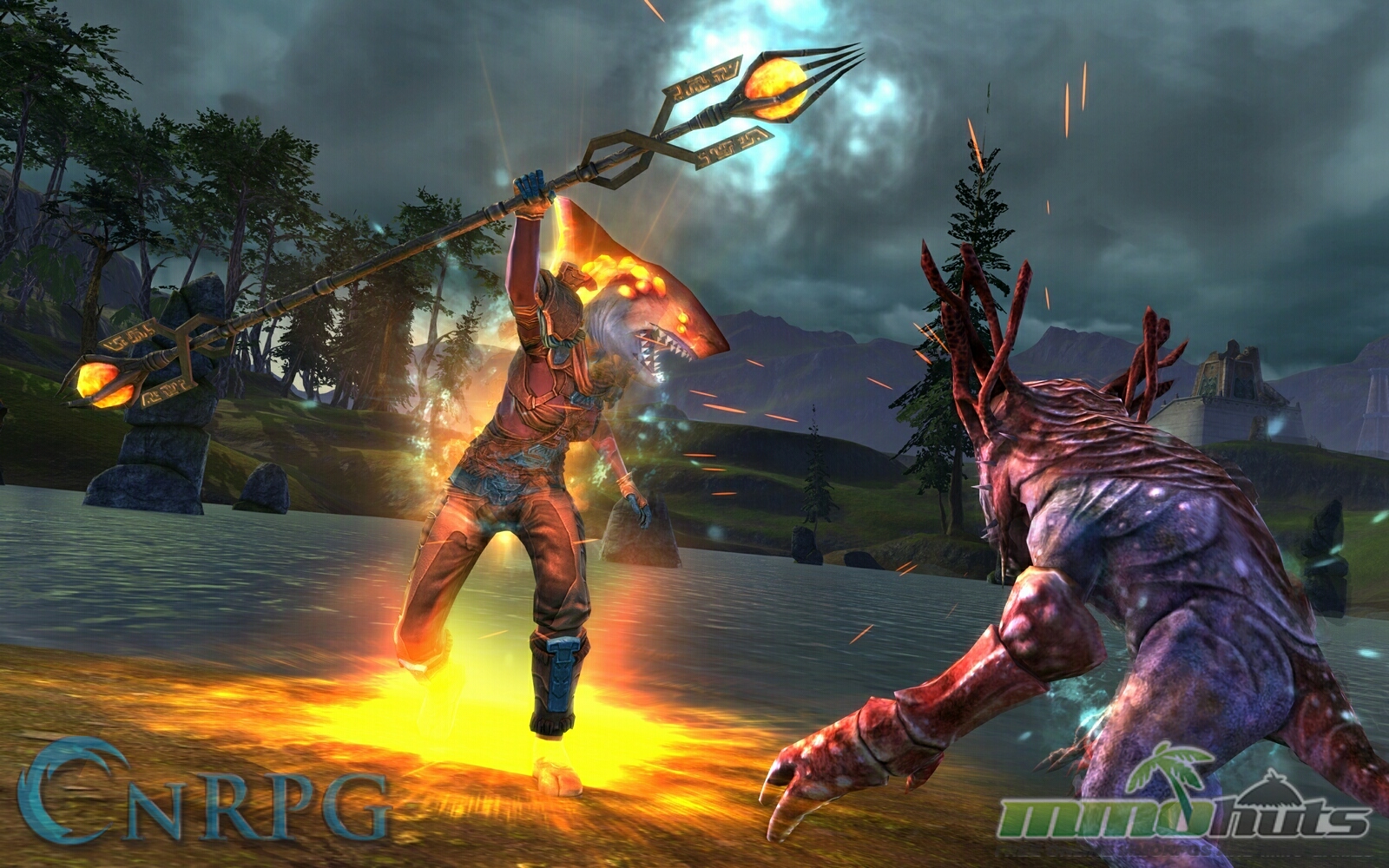 They also threw out a slew of class tweaks, buffs, changes, etc. Chloromancers, warlocks, archons, beastmasters, wardens, rangers – beastmasters and rangers got new ranged DPS pets, which everybody knows are the best kind of pets. I forget which one the beastmaster got, because I was too distracted by “The Blueberry” which is a gigantic, mega-huge, bright blue gryphon that spits… blue stuff, I think? I can’t recall, I was too distracted by how MASSIVE this gryphon was, like it truly captured my imagination, and players in testing called it The Blueberry, and now I want one.

They said they’re going to scale the Blueberry down before they patch to live, though, which is a bit of a disappointment, and maybe even a dealbreaker for me. Sorry, Rift.

But they told me the reason to play Rift is because you can build the character you want in their nifty class system, and I have to admit, it is pretty cool-looking. If you’re into that sort of thing and all.