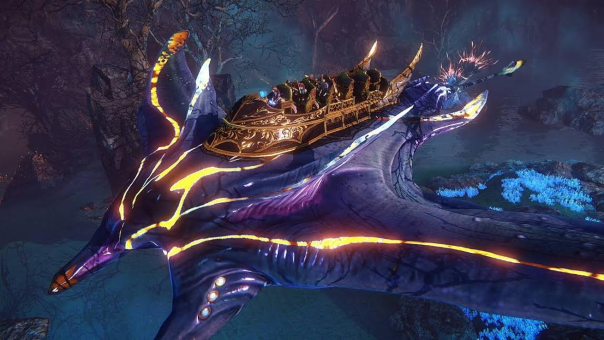 Last week, Riders of Icarus previewed its upcoming content plan to add new PvP options to the game. Today, they’re expanding our knowledge with information on Manastone Battles, one of the regular new PvP events.

Taking place in Exarahn Badlands, a zone where world PvP is always enabled, Manastone Battles occur twice a week on a set schedule. In order to participate in Manastone Battles, players must be in a Guild Alliance or Militia, and a minimum level of 28.

Announced ahead of time to the entire server, players will have a short amount of time to get ready in the Badlands before a Manastone appears in a random location. Guilds, Alliances, and Militia will compete with each other in a free-for-all to loot the Manastone and carry it safely back to the Vantara Manastone Oracle.

Team work will be necessary to succeed at this modified “capture the flag.” Whoever loots the Manastone will gain a large defensive buff, but that player will also be unable to use items, mount up, or attack. Not only that, the carrier will be displayed on the zone’s map for all to see, making them truly defenseless without the help of their allies. Carriers that die will drop the Manastone at their location, where other players can pick it up. The only exception is if the player is close to town, in which case the Manastone will respawn at a new random location.

Once a Manastone is returned to the Oracle, the player’s Alliance or Militia wins, giving the faction access to a large number of rewards including a Guild-exclusive multi-player mount.