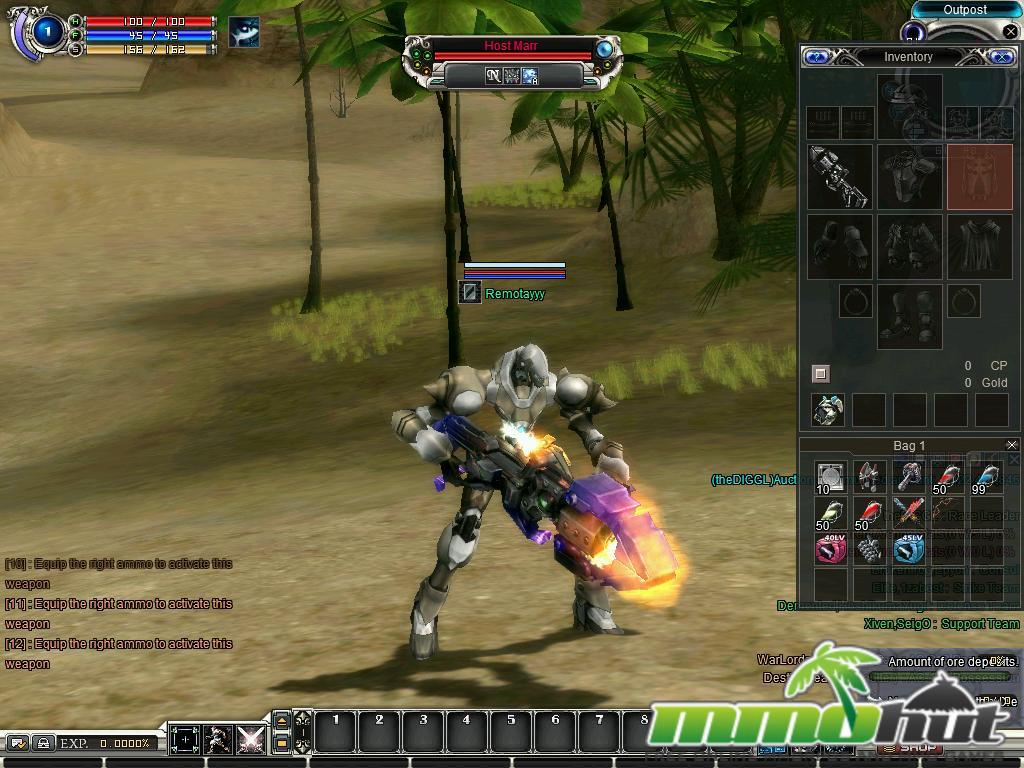 RF Online is a beautifully animated 3D Sci-fi MMORPG currently being published by CCR (update: recently its publisher changed to GamesCampus). The game was originally released by Codemasters as a ‘pay-to-play’ game, but was since re-released as a free to play game once the player base started to dwindle. The best aspect of ‘pay to play’ games going ‘free to play’ is that they usually have a higher production value and just feel as if the developers put a lot of effort into the game. This is of course not true for all games, but is remarkably true for RF Online, as everything from the game’s graphics to music to interface is top notch. If you’re interested in Sci Fi themed MMOs, RF Online is one of the few, so well worth checking out.The premise of the game is simple; each of the game’s three factions are competing for control of natural resources and whichever nation gains control of the special resources can physically mine the special ore and gain other faction wide bonuses.

Character creation is pretty straight forward in RF Online; select one of the game’s three factions and customize your character to your liking. Keep in mind each faction is its own race, but don’t worry about which faction you pick because players are allowed to create multiple characters and are free to create characters on the other faction at anytime. Each of the game’s three factions has their own strengths and weaknesses. The Cora Alliance for example has strong spell casters while the Accretia Empire has access to more powerful melee characters. In fact, the Accretia aren’t even allowed to create ‘Ritualists’ which are RF Online’s primary spell caster class. The Accretia are interesting in that they are the only faction that is made up of entirely mechs, as their faction is composed entirely of cyborgs. The game’s third faction, the Bellato Federation, are an industrial nation capable of building large armored battle mechs that they can use in war against the other two factions. 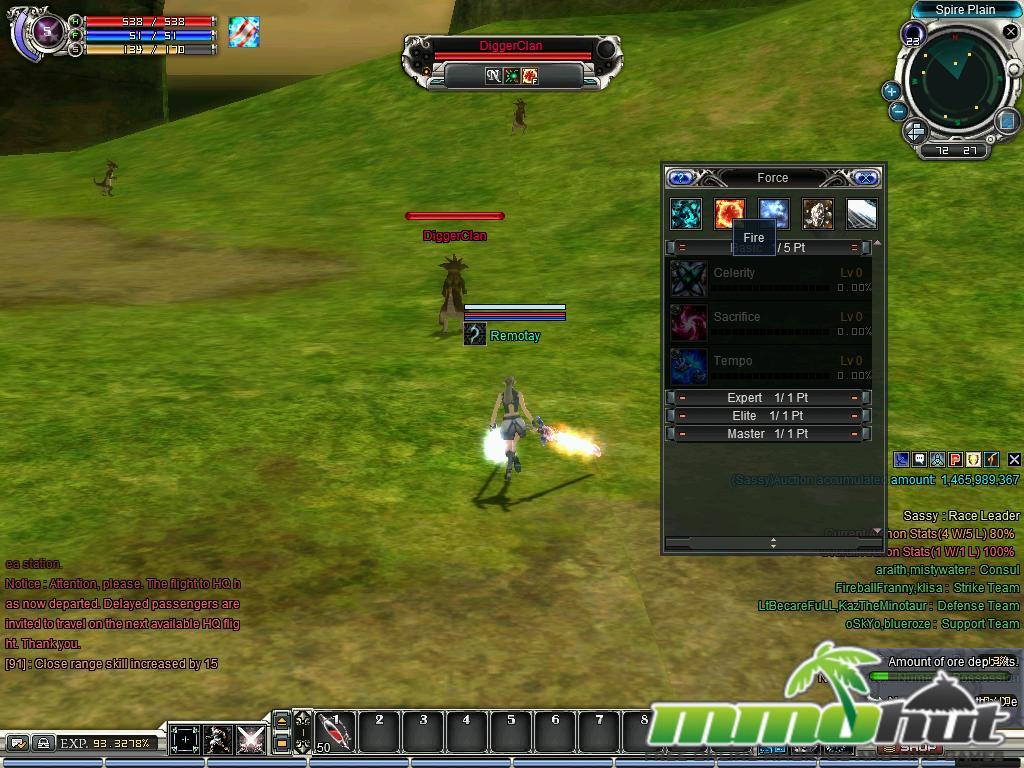 Rf Online does something that a lot of MMORPGs don’t do, innovate. The skill system in the game is extremely innovative and it works remarkably well. Instead of the traditional ‘level up and get skill points’ approach, RF Online has a system that rewards players as they use skills. Each skill in the game gains experience as the player uses it, and can level up multiple times. So the more often you use that double slash, the stronger it will get. I’m surprised other games haven’t employed similar ‘skill’ progression systems as the generic skill point system is starting to get old, and it makes much more sense for skills to improve as players use them. Each skill can level up a certain amount of times, some more than others and as they level up the skills effectiveness increases. Hypothetically, players can level up all of their skills to maximum given that they spend enough time using them, which is certainly interesting because it adds a lot of playability to the game. RF Online’s overall game mechanics are overall quite fluid and functional and it has an ample amount of quests to complete which are offered to players as soon as they level up, so no need to run back to town to look for quests!

This may kill the game…

The single biggest complaint I have with RF Online is the fact that game provides new players with ridiculously overpowered weapons that would normally be accessible only at level 40 or higher. I’m not sure what was going on when the folks over at CCR decided it was a good idea for newbies to start with an array of weapons that can pretty much ‘1 shot’ anything that moves for the first 15 levels. When I first played RF Online when Codemasters published it, they didn’t have any of this nonsense. Players are supposed to start out with a basic weapon that deals 10-20 damage, but instead they start out with dual plasma swords that deal 1054-1500 and a handful of other weapons. Just to emphasize how ridiculous this is, my character started out with a rocket launcher that fired ‘Giga Nucleaur Warheads’. If that doesn’t sound over powered, I don’t know what does. The warheads can kill any group of enemies in a single hit in a small area. The fact that newbies start off with such powerful weapons totally kills a large portion of the game, as players will never need to purchase new weapons or try and complete quests that provide weapons as rewards. The reason I play MMORPGs is to try and make my character as powerful as possible, but if I start out ridiculously powerful, there’s no reason to play. CCR, the game’s publisher, better get their act together and address this issue, otherwise the game isn’t going to go anywhere. 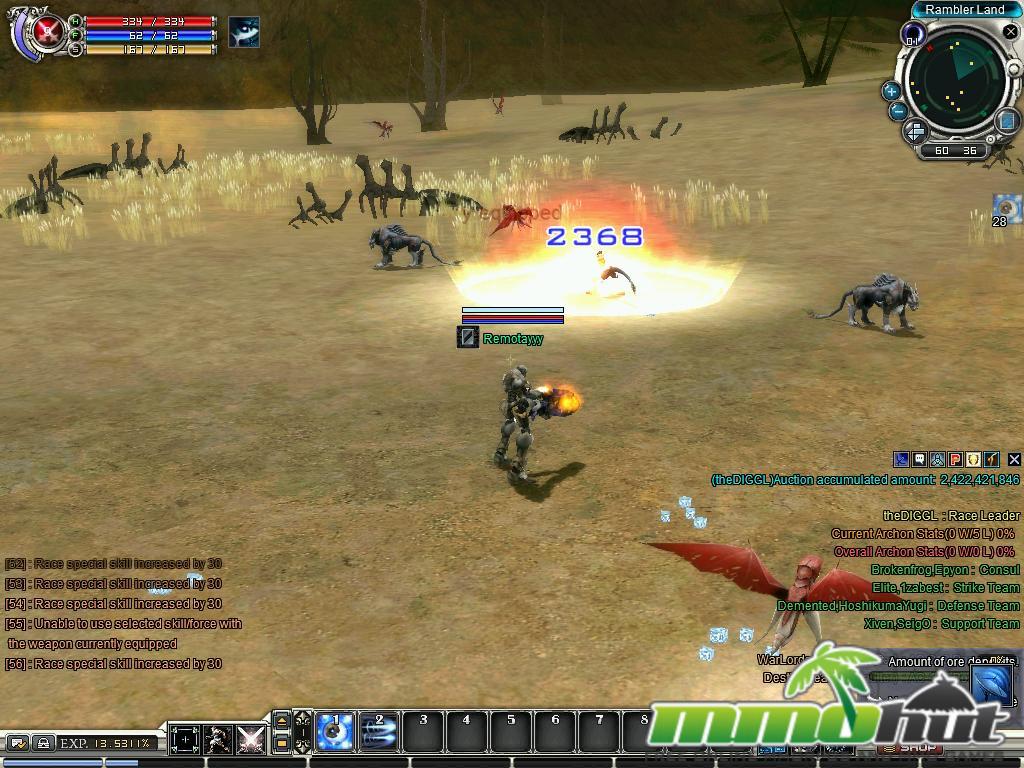 RF Online has a lot of things to do and is certainly one of the best looking games out there. One interesting feature in the game is its political system which is similar to that of Archlord’s. Each week, the player with the most contribution points on each faction becomes the leader of that faction. The leader of a faction is capable of speaking to all players and understanding the language of the game’s other factions, which normal players cannot do. Contribution points are gained through completing quests and participating in the game’s faction based PvP. Another positive aspect of RF Online is that game’s job advancement system, as since every class can ascend to a new class at level 30 and once again at level 40, which spices up the game by adding variety to it. Perhaps the game’s most impressive feature is one that a lot of players won’t appreciate; the game’s music. The only other game which has music that is on par with RF Online’s is Sword of the New World. If you’re a gamer that appreciates quality music, you certainly won’t be disappointed with RF Online.

One aspect of RF Online that had me puzzled was the distribution of monsters across the game. You would imagine that the game’s developers would place lower level monsters and NPCs near the starting areas and more powerful monsters in the game’s later areas, but for some reason that’s not how it works here. It’s not uncommon to find high level monsters that are capable of ‘one shotting’ you near the newbie areas, so keep your guard up. Even with the ridiculously over powered starting weapons, newbies won’t be able to kill higher level monsters as they are difficult to hit and usually have massive amounts of armor.

Even with RF Online’s obvious flaws, the game is still incredibly polished and has a lot to offer. It’s also one of the only Sci-Fi MMORPGs out there to, which in and of itself makes the game a bit more unique. The main drawback to the game is the fact that players start with ridiculously over powered weapons, but that’s something I hope the publisher will quickly change. If RF Online wasn’t your cup of tea though, I’d recommend checking out other Sci Fi MMOs like Anarchy Online, Ace Online and Zero Online.