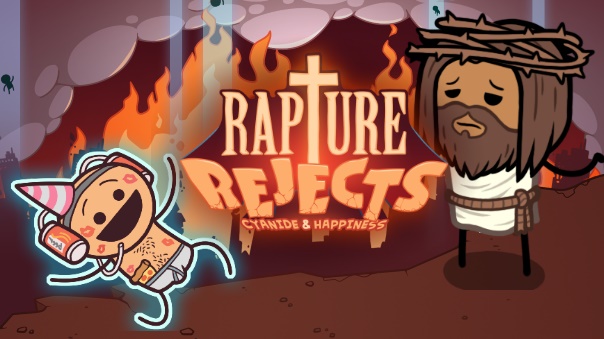 Cyanide and Happiness is fairly well known for irreverent, no-holds-barred humor that holds absolutely nothing sacred. It should perhaps be no surprise then that the subject of the video game inspired by the comic strip and show holds that same sort of off the cuff mirth. Rapture Rejects is nothing if not true to the Cyanide and Happiness’ style of mocking that which deserves to be mocked. Which is pretty much everything, up to and including Armageddon itself.

And that is the very premise of Rapture Rejects. Armageddon has come, and through the rapture, God has brought all of his most faithful servants home. You, however, did not make the cut. Because God is a fickle god, he has decided to give you and the other earthly remnants one last chance to make it into heaven. Battle royale! The last one standing goes up, everyone else goes down.

Before your first match starts, you’ve got a chance to do some basic customization. Really, it’s relatively extensive. You can select from a wide variety of skin tones, hair styles, facial hair, hair color, and even opt to start the game in your underwear or a basic shirt. Linking your Twitter account will even give you a costume. Yep, you can dress up like a twit. Congratulations. In practical terms, this is actually kind of nice, as you begin to recognize other players who are worthy of running the crap away from. Curse you Ky. Curse you to hell.

The first difference between Rapture Rejects and most Battle Royale games that you’ll encounter is that Rapture Rejects is played in isometric 2D style, rather than the typical third person shooter. It actually plays quite nicely as a twin-stick shooter, though, once you get used to the controls.

Also setting Rapture Rejects apart from its BR brothers and sisters is that you don’t parachute into the area and pick your favorite strategic zone. Instead, you’re spawned in randomly on the map, which is moderate in size, and left to scurry about and arm yourself before you get gunned down mercilessly.

This is done by opening chests, mostly. You can find basic weapons on the ground, but the more effective firearms will be in chests. There are three types of chests that I’ve noticed. Basic reds, more shiny blue chests with a gem on the top, and the godsend mega-chests that show up on the map, much like supply drops in other games, tempting targets for looting, and for shooting your opponents as they try to loot.

The guns themselves in Rapture Rejects are certainly unique and clever. From the bubblegum launcher, to the “knives in a toaster” shotgun type weapon, to the the compost cannon. All but the most basic weapons also have an alt-fire mode that will do various special attacks. The bubblegum launcher for example shoots a spread shot of chewed gum, rather than gumballs, which can encumber your opponent and slow both their movement and reload speeds. Quite useful.

The weapons aren’t your only tools, though. Aside from a variety of restorative items, such as bandages and booze, you can also use consumable drugs to ‘expand your perceptions’, which will widen your area of view (this can also be done with interactable satellite stations positioned around the map, but you must then remain stationary). Additionally there are tiered power ups: sneakers to help you run faster, fanny-packs and backpacks to allow you to carry more ammo and consumables, armor of various forms to reduce incoming damage, gun-nut magazines to reduce reload speed, and various lensed utilities like microscopes and telescopes, which will, much like the drugs, increase your area of perception. This can be quite useful in getting the drop on your opponents.

The final class of item are rechargeable, usable utility items. These include a disco ball that summons angels to heal you, a tank of freon gas to create freezing traps, a cardboard box that you can hide under as a disguise, or the ever lovin’ F-Bomb. No really, it’s a little nuke with an F on the side and when you use it it beeps like someone said a naughty word and everything. It’s pretty glorious.

Really, there’s not a whole lot else to say about Rapture Rejects’ offering to the Battle Royale genre. Games usually take from about 30 seconds to 3 minutes to get into, and depending how good you are last from about 30 seconds to 10 minutes, maybe? Given the encroachment rate of the wall of burning death that is simple called “Armageddon” (as in Armageddon is closing in!), I can’t imagine matches lasting too much longer than that. I think most matches I saw had between 5 and 10 “Rejects” participating.

One fun part that I can mention is the tickets for the “Sinners & Winners” game show that happens between matches. Every 100 tickets you earn, with matches offering a minimum of 5 and more if you perform well, you get a chance to “spin the wheel” as it were for a free cosmetic item. I have no idea exactly how many items there are, but I imagine quite some number, as I saw quite a diverse cast of characters in the pre-match lobbies.

Frankly? I’m bad at Battle Royales, so I don’t tend to like them. If I was going to like any Battle Royale though, it would probably be this one. If you are the sort who does typically like Battle Royale games, and can get behind the slightly different style of this one, I think you’re in for quite a treat. I give Rapture Rejects 3.5 out of 5 coconuts for at least breaking the standard BR mold.