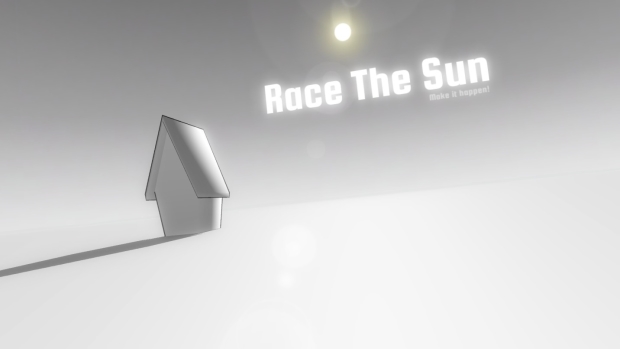 Can You Hear Me, Major Tom?

This is Major Tom to Ground Control! I mean – Welcome to Race the Sun! A game that hates you and mocks your failures! I am no stranger to fanciful racing titles; as a youth, I spent a great deal of time playing F-Zero and games of their ilk. So when I was told Race the Sun was “Starfox in an infinite landscape,” I was naturally very excited. It is just that. The ship you pilot resembles greatly the Arwing of Starfox fame, and it is powered by the sun.

The premise of the game is that you are racing towards the infinite horizon. No real story here, just a fantastic racing experience. It has controller support, but it is not needed to enjoy this title at all. The ship is powered by sunlight, so if you are caught in the shadow of a mountain or blocks for too long you begin to slow down. If your ship is in the shadows too long, you can stop and lose. The other way to lose is to crash into something. One full-frontal collision equals death. You can clip your wings into things, but it slows you down and lowers your bonus multiplier. As a fair warning, you will die. Often. It’s going to happen, so you may as well just get used to it. In fact, one of the random challenges it gives you is “Crash into six objects.” That made me laugh, and did not take too long to acquire. 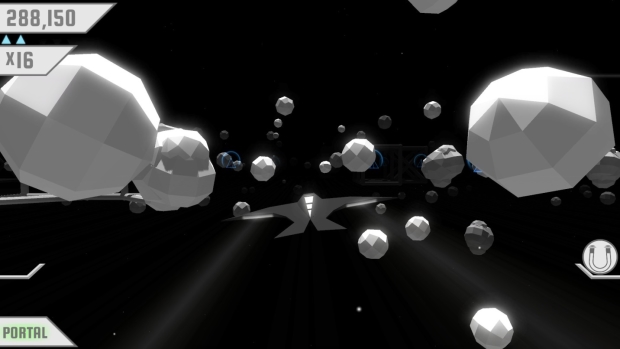 Reaching for the Blessing of the Sun

As the game progresses, the sun begins to set, and it grows harder to stay in the sun. There are many challenges, and each challenge has a certain amount of points it is worth (1-3 that I have seen so far). Completing them will put points towards your next level, which unlocks things for your ship (upgrades, et cetera). There is more than just the main race mode, however. My one real complaint about this game is that there is no multiplayer mode – yet? I am uncertain as of this writing. I reached out to the developers, but received no answer just yet. I hope there will be, have heard talk that it could happen, and it’s mentioned as a feature on Steam’s Greenlight, but at the moment it seems like just hearsay. The idea of racing against my friends, desperately trying to push them into walls so that they explode and die in a horrible manner appeals to me on so many levels.

But as for game modes, there’s the main race, which is an infinite race towards a setting sun. As stated earlier, it changes every day, offering new challenges and ways to punish yourself. One slip and you can explode! The game devs have a pretty good sense of humor; as I leveled, I got to read humorous comments on them “giving me a sporting chance” as I was “dying too often.” Next is “Apocalypse” Mode. This mode really has a name that is spot on. Normally when you play, each Region increases your speed a bit. In Apocalypse Mode, you start with Region 3 speed, and the game immediately begins punishing you with falling rocks, explosions, and death. Death is everywhere, lurking around every pixel. 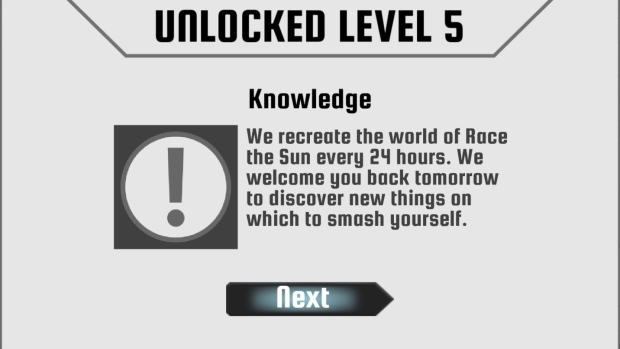 You Are Not Alone:

Race the Sun also offers player created content. There’s the “Simplex World Creator” that allows players to make content. Pretty fantastic content gets put in the main menu to try. I have not tried my hand at making worlds, because I strongly suspect that should I attempt it, I will ruin my friendships, and I do not wish to do that. But I really praise the dev team for it, as it’s pretty fantastic overall. The use of the program is kind of tedious, but very intriguing.

While this is a single player game, there are many things to make the game easier/harder to play, depending on your style of racing. As you progress, there are things that appear in the game, as well as potentially upgraded onto your ship. Without leveling, the game is fairly simple in that you just race against a constantly changing environment, and I feel that inevitably you will complete challenges whether you want to or not. There are items that allow you to jump (using the space button) and items that increase your speed. As you level, there are also warps that take you to another region, and if you survive the warp, you go back to where you were to resume gameplay. There are also upgrades to your ship such as the Magnet (draws items closer to you), and an upgrade that allows you to survive a fatal crash once. That one was very fun, until I used it once and crashed not five seconds later. That was kind of disheartening. 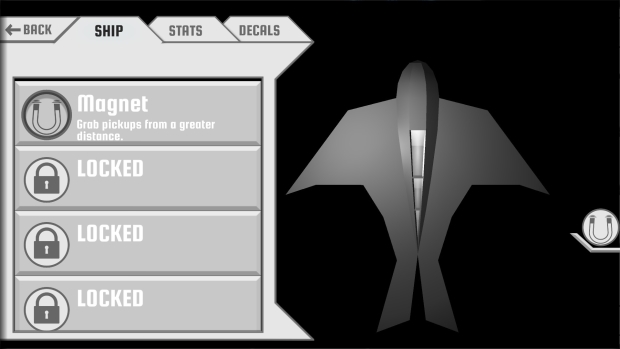 While this is by no means an RPG, I have not had this much fun playing such a simple game in a long time. It was soothing at first. Then it devolved into me howling with frustration as each explosive ending occurred. There is a valuable lesson this game offers that I did not cover earlier. Muscle memory. Playing this game for a good hour or so really can help muscle memory. You learn where things are, how far over you need to fly to survive, or do a cool trick. Each day it changes, and you have to learn all over again. If you do this, I feel like it could help someone’s memory retention a great deal. Edutainment without realizing it? Way to go, guys.

While this game has very simple graphics, it really plays to the game style. The backgrounds are simple but beautiful, and it doesn’t take a single thing away from the enjoyment of the game. It allows for many people to get into this game without worrying about their graphics cards. The simplistic approach is one that I think does not get used enough, or used well.

The controls are crisp and sharp. You do not need to master WASD, or use a 100 dollar controller to play this game! You can simply use your keyboard, directional arrows and the space bar for the most part, and that’s fantastic. Sometimes I would inch myself over too far and explode into bits, but that was more than likely my own failure than theirs.

While there are few “features”, what really sells this for me is that every single day the game changes to allow something new and interesting. That, coupled with user-created content, can create an exciting experience daily, and I love that. This is a game I can easily get lost in and lose complete track of my day, or keep checking my leaderboard scores, to see if I’m racing hard enough. (I am hopelessly competitive)

This is the only weak point for me, to be totally honest. If they would create an add-on to change the music of the game with your own playlist, that would be terrific. Sure, I could mute the game and use Winamp/whatever other music program I desire, it would be a great addition to the game. Maybe the music could alter the game? Now that would be sick. There are lots of things you could do with the music. It’s fine at first, kind of soothing, but after a while it can become incredibly grating on my nerves. The explosions are nice and loud, reminding you that you aren’t quite good enough at the game yet. But I do not feel this is a game you can ever be “good” at.