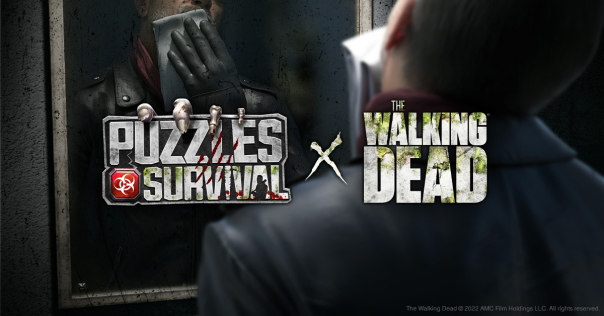 Beginning August 2, players around the world will encounter their favorite characters and story elements from AMC’s iconic television series, including fan favorites Rick Grimes and Michonne, and even the villain you love to hate: Negan and his infamous baseball bat, Lucille.

In the world of Puzzles & Survival, an unknown virus has transformed most of humanity into flesh-eating zombies. To make things worse, Negan and his band of Saviors have appeared, intimidating and subjugating any survivors unlucky enough to cross his path. Puzzles & Survival players now have an entirely new opponent to deal with.

In this crossover event, players will experience an original storyline involving Negan, with new artwork and gameplay faithful to the events of the show. Opponents are other humans, which creates a far more complex and morally ambiguous situation than battling against the undead.

But players will have the support of favorite characters from the Alexandria Safe Zone, such as Rick Grimes, Darryl Dixon, and Michonne – with the choice of siding with the survivors from Alexandria in the coming battle for freedom, or bowing to Negan and the Saviors.

This August, the Saviors will go to war against the survivors of the Alexandria Safe Zone. As the war spills over into Puzzles & Survival, players can use the code [PNSNEGAN] to earn rewards which can better prepare them for the upcoming conflict.