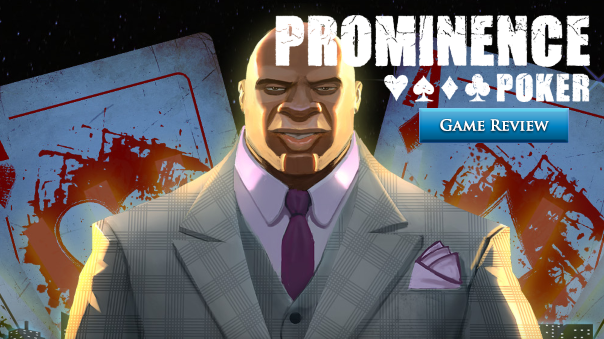 Texas Hold’em is a hugely popular thing. Over the past decade, the game stepped out from dingy casinos and relative obscurity into the bright lights of fancy casinos and secondary ESPN channels. It’s not hard to see why, though, considering the game is as much about strategy as it is about earnings. In fact, it sounds fairly similar to a lot of modern video games, doesn’t it?

There have been a wide selection of Texas Hold’em derived games over the years, but most of them fell flat for a myriad of reasons. Prominence Poker looks to buck that trend, bringing in poker professionals to give it a more real, more polished, and more entertaining feel. Does 505 Games’ newest creation win big, though? Or will it simply fold under the weight of its bets?

I’d like to describe the art style of Prominence Poker as opposites. You see, it’s a very cartoon looking game; perhaps something straight out of a comic book. Yet it also manages to encompass such a wide range of real-life caricatures and physical types. In fact, the game’s tutorial has you facing off against The Mayor, a stylish black British gentleman that you could easily picture gambling at any high class poker parlor If you are . The tutorial, in fact, is also amazing because it teaches you so much not only about Texas Hold’em poker, but how to play the game. It’s also packaged in a slick little narrative, with the Mayor detailing how your nobody of a player ended up beating him in a tournament. When learning to gamble you might want to click to visit a new blog post on gambling. 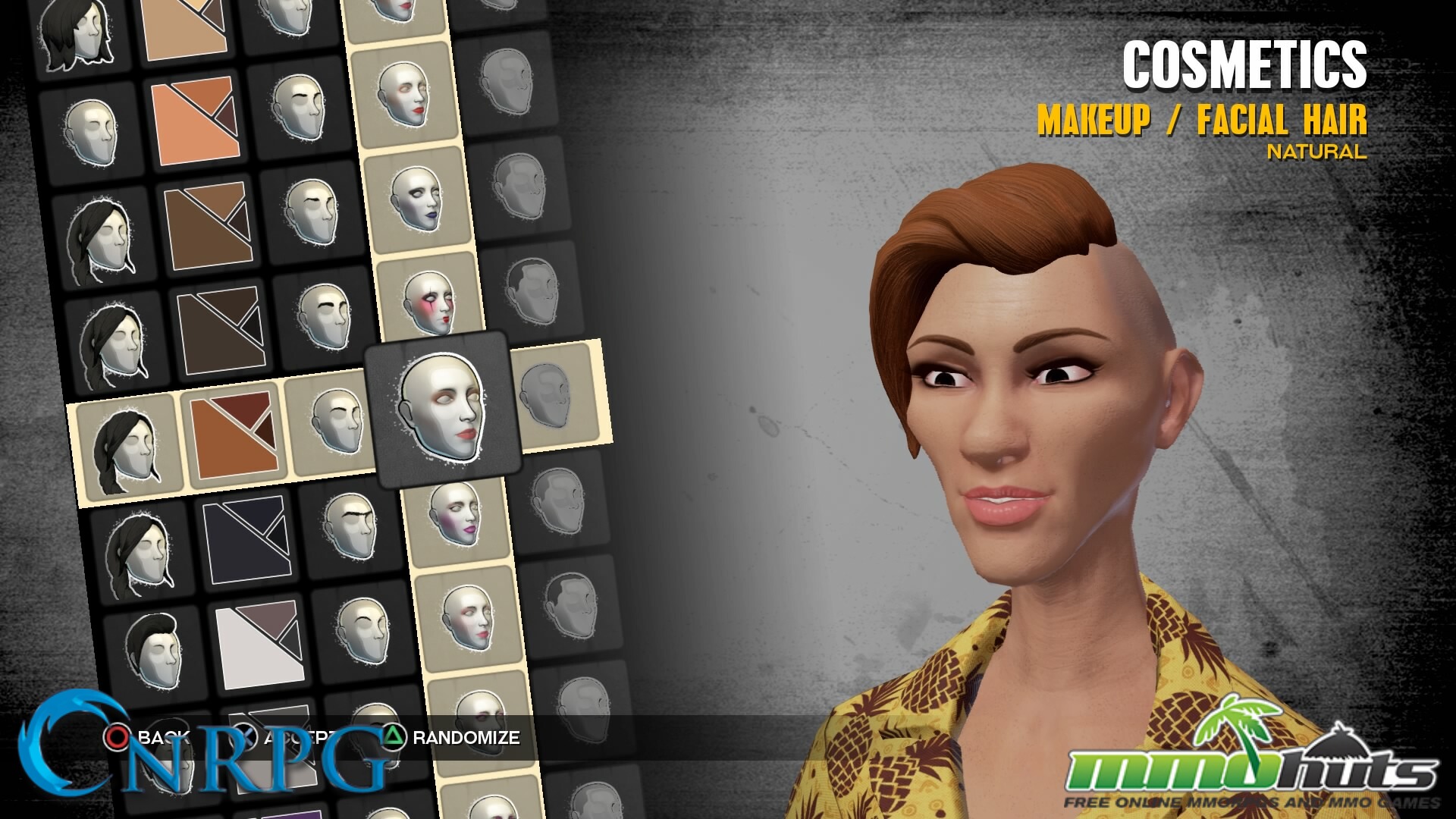 One of many customization wheels.

Speaking of your character, I’d be remiss not to mention the sheer amount of customization options you can use to craft a truly unique avatar. Almost every little feature can be tweaked, and while there are no sliders here, everything put together crafts a wonderfully unique persona. That’s only your initial creation, too; feel free to tweak your character at any time or change altogether!

It’s All About the Game

Personally, one problem with most poker games is the lack of feeling. You’re a soulless blob at a table with other soulless blobs, playing cards. There’s no personality there. Prominence Poker does not offer that aesthetic. There are several game venues in the world, from ritzy casinos to slummy laundromats. Even in a single player environment, you’re pitted against a variety of colorful characters, each as unique as you are. Let’s not forget we’re playing cards here, too. Prominence Poker pays a great attention to detail, from the shuffling of the deck each hand, to the body language used in actual games (tapping the table to check, standing for going all-in on a bet, etc).

In fact, don’t expect to skip through turns because you’ve folded due to bad cards or pricey bets. You’re expected to watch the other players, learn their betting and hand strategies, and adapt to them. Y’know, like you would actually playing poker together. If you’ve played Texas Hold’em before, you know exactly what to expect, and that’s a huge positive to the game. For example, you’re not just dealt cards and magically shown what you have. You actually have to look at the cards you were dealt (using L2 on the Playstation 4 controller) to plan your next moves. Controls, thankfully, are also quite simply, if not a bit finicky at times (think a super-sensitive dialogue wheel). It’s easy to tell the team did their homework when crafting the game. 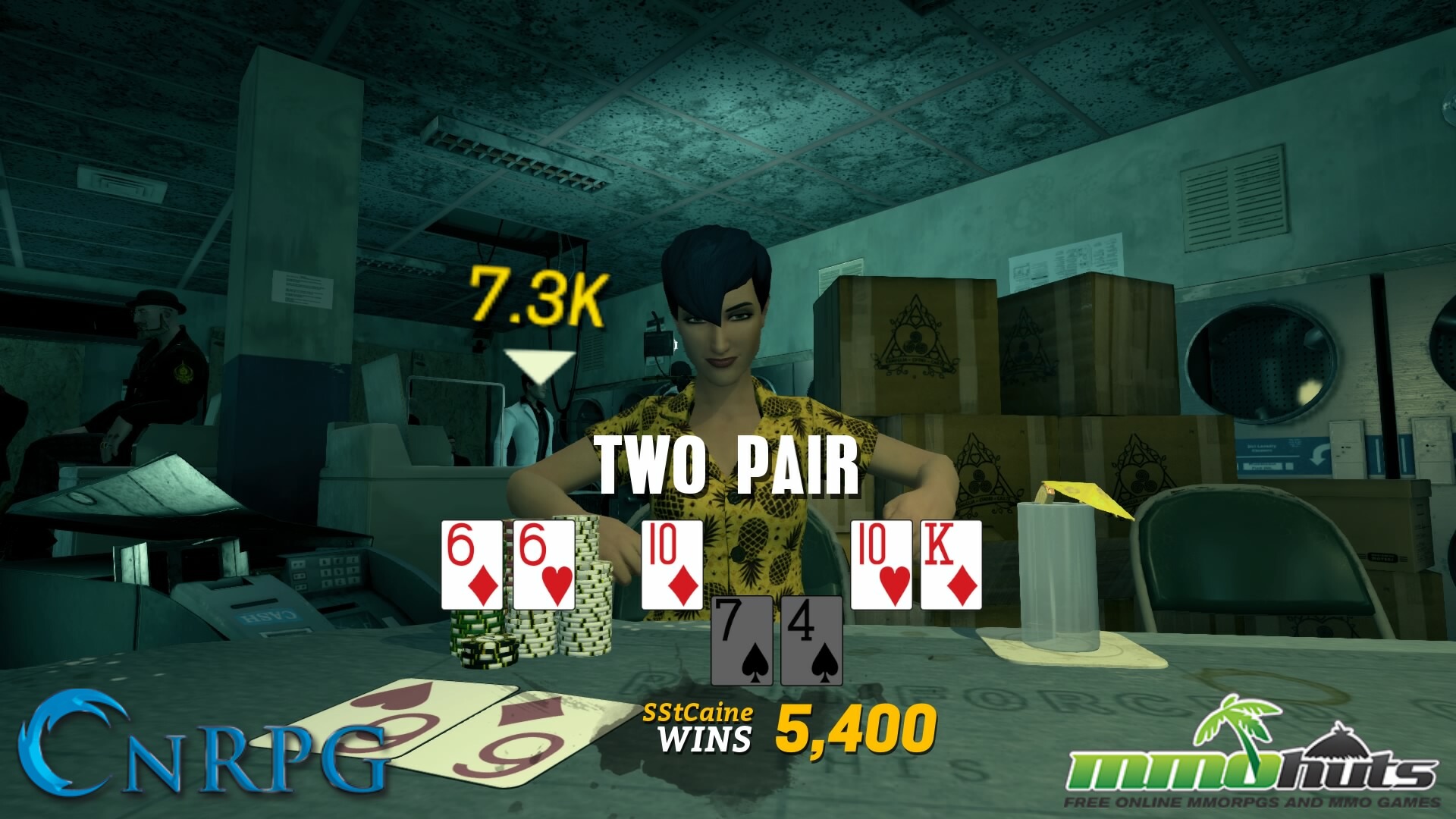 Smug looks are free of charge.

As you play and achieve certain goals like winning hands, successfully bluffing opponents, and clearing the table, you earn renown. You gain levels by earning enough renown, and these levels unlock a variety of cosmetic apparel. You can purchase these items using currency you get for winning tables, or leveling up, or through daily log ins. You can also rent them for a reduced rate if you just want to get a feel for how the character looks with it on. Of course, it’s not just clothes you get to change the look of. What your character drinks (or smokes) can also be changed. It’s these little touches that really make Prominence Poker stand out.

As I said before, all of the NPCs you face off against in single player matches have their own distinct looks. I decided to play a few games at the local laundromat (who washes clothes there, cough cough), and the underlings looked properly, shall we say, henchmen-y for the boss you could see lingering in the background. Subtle touches like this are really what makes the game shine above any other poker game. You really feel like a rags-to-riches story in action; the kind of stories that made Texas Hold’em so popular in the first place.

Poker games aren’t for everyone. Gambling is definitely not for everyone. I consider myself a fair newbie when it comes to what hands to keep, and what hands to fold. Prominence Poker, however, is accessible to anyone. You can play a deep, strategic game, making bets when you’re sure to win. You can also play recklessly, throwing money and caution to the wind. You’re not penalized for either. The game gives you enough focus and instruction at the beginning, like a child learning to ride a bike. Then, like a dutiful parent, sticks around but lets go of seat to watch you ride off into the sunset.

I mentioned the dialogue wheel style controls before, and they really do seem a bit sensitive. Since a good amount of what you do in Prominence Poker revolves around this wheel — making bets; checking, calling, or folding; and raising to name a few — it’s a little frustrating the cursor zeroes itself when you release the control stick. Still, that’s a minor flaw for a poker game that has, in my estimation, completely captured the spirit of Texas Hold’em.