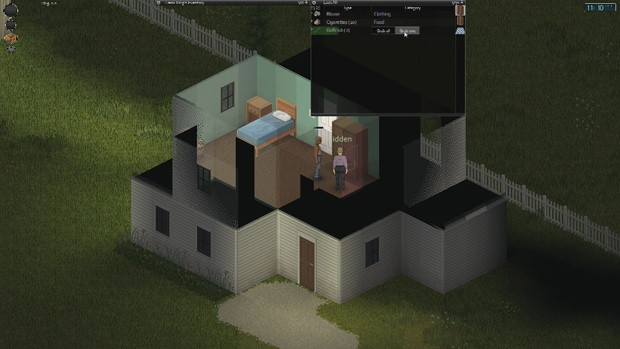 Flesh eating zombies, these awesome creatures top most lists of horror tropes and for good reason. Luckily this catastrophe will probably never happen in real life, but we can still dream the survival fantasy thanks to the creative string of human survival games hitting the market lately. But of all the titles I’ve tested in this genre, Project Zomboid sticks out as being the most individual of the bunch. And with the recent push to finally add multiplayer functionality, it was time to strap up and take another run through Zomboid town to see how fresh the dead are these days.

Most games in this era are three dimensional, but Project Zomboid still goes for the old ‘top down’ two dimensional style. Any old school RPG fan of course digs this. This zombie survival game puts you in control of one of the few survivors in a sandbox town, leaving it up to you to decide the best path of resistance to remain breathing another night. You will usually start out in a house, and if you like being alive you should treasure this safe haven as your home for now. Since the infection overwhelmed your town with little warning, and people got caught in the middle of doing laundry or anything other daily activity, you can expect zombies everywhere. Take one step outside and you will immediately recognize the danger. You will find a zombie almost everywhere, and the bigger the space, the bigger the horde you will find. 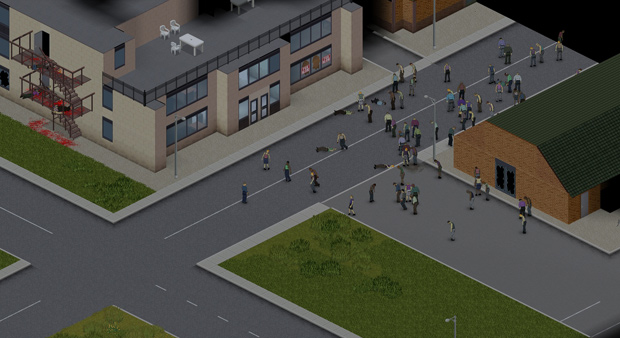 In order to survive you need food and water. And since the electrical grid still hasn’t gone out, a full fridge is going to be your highest priority once a level of safety is attained. While the electricity is still on, there is still a possibility to have fresh food, and for the record food does rot if left just anywhere. Water luckily keeps running for a longer period of time, and as long as it doesn’t get contaminated, you’re good to go for a while. When I had scavenged around for enough food, I went to search for tools, like hammers, crowbars or any other tools that I might deem necessary for future plans. You see, you can never get rid of these zombies, and eventually things will get worse and supplies will get harder to find. You might be able to live weeks with the supplies you will find throughout town, and in the many office buildings or warehouses. But eventually you’ll need something else to live on. Thankfully you are able to find seeds for a lot of different vegetables or fruits.

But if you are new or only a few days in, you are still too far away from possessing the skills or knowledge to begin your own farm. Those unlucky to be stationed in the urban center wouldn’t even dream of spending enough time outside in the zombie horde infested wasteland to plant crops. If you managed to find an axe, you are however able to chop down trees and get yourself some wooden logs. If you have obtained a saw, you can saw these logs into planks and these planks can be used for a lot of structures. Walls, doors, and other defensive structures help make your establishment a little safer. Having a wall around your property, of having something to defend your crops is definitely needed if you plan to live longer than a couple of weeks, so I advise putting a little time each day towards this project early on. 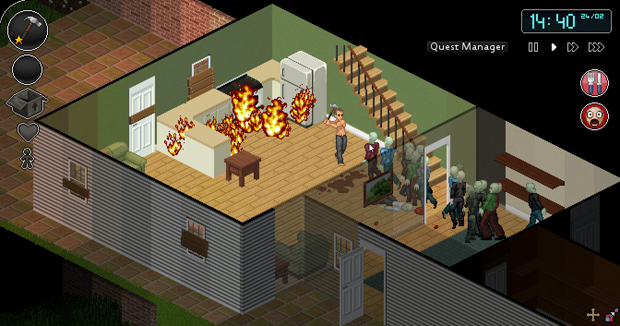 When it comes to personal mobile protection, weapons are abundant. But a proper reliable weapon can take some time to acquire. You can use almost anything you can find in the world, but only a few items are actually useful for beating down a zombie. Taking down a zombie is easy, taking down a couple of zombies is a challenge but taking down a horde is just impossible… at first. You will definitely not take down a horde with a melee weapon, and should aim for some firearms once you have settled. But do note that sound will attract more zombies, and these guns should be seen as a final alternative. To find all these mentioned tools, you will have to break into some buildings. Thankfully the world is quite deserted and it’s rare you’ll need to ask to ‘borrow’ anything from your non-existent neighbors. If you don’t believe me, go and ask the turned policeman that might try to chew on your arms.

First hope your neighbors were trusting enough to let the zombies in, and that you won’t be faced with a locked backdoor, as it can complicate things a bit. If you do not find an open door, you could also try to open a window. It is a more timely procedure though that might not be viable if the building has too many walkers around. The last option is to break your way in. But do remember, breaking a window or forcing a door open makes a lot of noise in the process, and zombies around you will probably try to figure out what the hell is up. And if you were particularly nasty in this lifetime, karma will be sure to let you know with the jackpot of a home alarm firing off. All the zombies in a few kilometers vicinity will come over to check out what kind of fresh meat was trying to sneak in. Assuming you got inside in one piece, loot will be everywhere. Check every bin, cabinet, and cupboard in every room to max out on supplies for your effort. I get a bit of RPG nostalgia from the salvaging aspect of Project Zomboid. 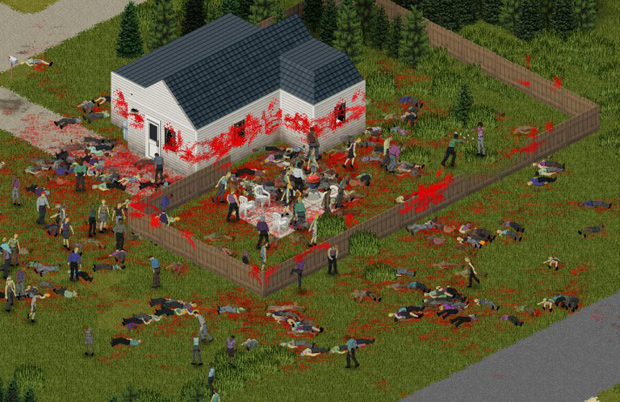 The Home Security System Massacre of 2014

As I mentioned, beta servers are currently testing out the multiplayer servers. I myself was waiting for this for a long time and I jumped on top of it with my usual zombie survival crew. Since there were now actual survivors in the game you are able to work together with your friends to survive this horrible world. Or you can live by yourself and wage fights and wars with them. With my group of friends everything started peacefully; we set up in a hotel, built a heavily fortified fence, and lived out our first few days in peace. Everyone was happy and we were safe from the zombies, until someone managed to do something that we all didn’t plan on. Since we still had electricity, and the hotel had a big kitchen, we tried making a top quality feast since canned meat just doesn’t cut it forever. Unfortunately someone managed to make a fire with our one oven and it didn’t take long before our hotel burned down and we were out on the streets again. This created fights inside our group, and our group of twelve men was split into half with one half moving to a different city. This ended up in a war for supplies, eventually leading our two groups to shoot each other down in a bloody dispute. 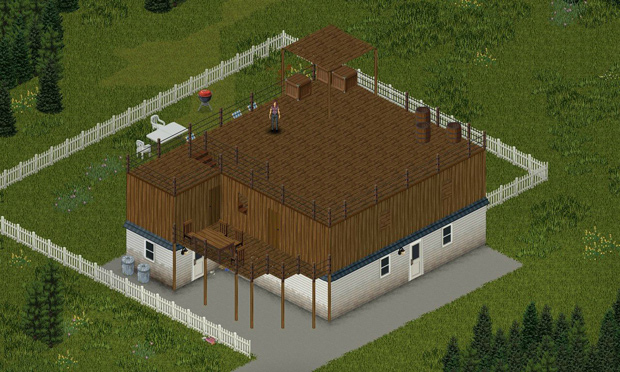 Project Zomboid is a lot of fun, bringing back the old school style of roleplaying games and bringing the inside scavenger in you alive is something that I enjoyed quite a lot. In most zombie games the zombies typically are never actually scary or more dangerous than other players, but again Project Zomboid sets itself apart from the now crowded genre. In the multiplayer I experienced a completely new game than what the single player had to offer, and I must say that Project Zomboid is probably one of the best, if not the best zombie survival game that I have ever played. Anything is possible in this sandbox game; you seek your path and have your own choice in how you want to survive.