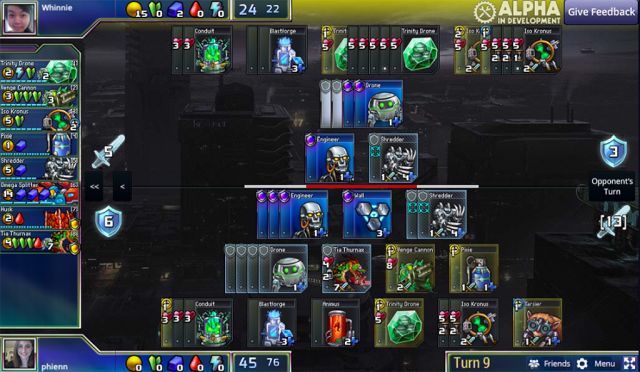 What if you took the best of RTS, but removed the real-time?

Prismata, the energetic debut from Lunarch Studios, boils strategy down to its purist form then presses ‘fast-forward’. Players compete against other humans or ruthless AI opponents, progressing through quick-fire turns while building up broader strategies.

Playing Prismata In Prismata, players take turns spending resources, building up economies, constructing an army, and obliterating the opposition until only one side remains. Games last only minutes, but always feel fresh thanks to randomly-generated unit pools that are unique to each match.

Each game, there are new units to construct, new build orders to plan and discover, and new threats to respond to. How will you become victorious?

“Prismata uses turn-based mechanics but, at heart, it’s a love letter to the RTS genre,” says Elyot Grant, co-founder of Lunarch Studios. “We wanted to replicate the genre’s combination of fast tactical decision-making with broader strategy, but remove the mechanical barriers to entry and present the game’s complex systems via a clear and simple interface. The result, we believe, is a game that feels new, interesting and exciting, each and every time you play.”

No Decks, No Randomness

Featuring simple and elegant economic and combat mechanics, Prismata encourages quick but in-depth thinking. Will you execute a perfectly-timed rush? Or will you build up a monstrous economy and steamroll your opponent with a massive army? Maybe you’ll change your plans entirely when you see what your opponent has in mind…

No pre-built decks. No random advantages or luck-of-the-draw moments. Prismata celebrates quick-fire tactics and decisive strategy. It’s a turn-based StarCraft without a map; Hearthstone, only with workers and build orders.