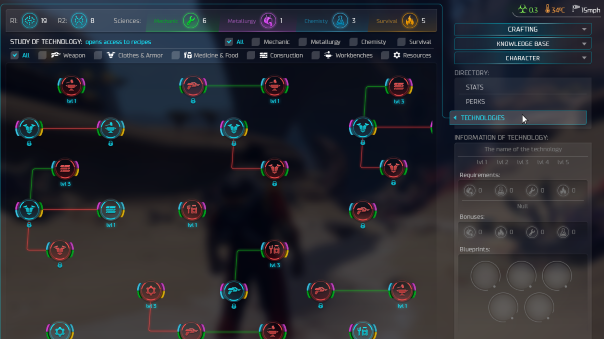 The latest Population Zero blog goes over an important facet of the game, how the tech and science trees work. As a colonist, you will gain useful information about the environment to expand the knowledge base about the planet Kepler. With this information, players might obtain a perk while performing actions, which will ultimately increase the effectiveness of that particular action. Some disciplines might be closed for research until fulfilling specific requirements. For example, colonists can’t study steel weapon production before they expand their knowledge in metallurgy, chemistry and discover the “Steel Processing” technology. You will be able to view your science progression and available knowledge to realize how far you have already moved forward, and even if you die a terrible death, this knowledge stays with you.

There may be points in time though, where access to science gets blocked. This could happen, as an example, thanks to picking a faction, which has a prohibition towards a scientific discipline. If that happens, the technologies which demand specific knowledge will also be banned. That prevents access to related schemes. Technologies give characters access to a quantity of schemes. Without schemes, players can’t craft an item, though they may use the scheme by getting it from someone else. It’s also important to note that exploring a technology that requires a resource expenditure can cause an increase in one of their related technologies. The increase is obtainable once at the moment of technology exploration. At some point, technology availability might be an imperative requirement for obtaining a specific perk.

Technology loss will also ban players from scheme access related to that particular technology. PLayers will not be able to study new technologies that have a reference to a banned one, but they will keep the bonuses for science, which were obtained earlier. In case of death, as mentioned before, the character keeps all discovered technologies and studied science, that allows quickly make up for lost time. The goal is to make sure players have to build an actual character, and choose what they want to do, and how well they can do it. It’s no fun to be a master of everything.