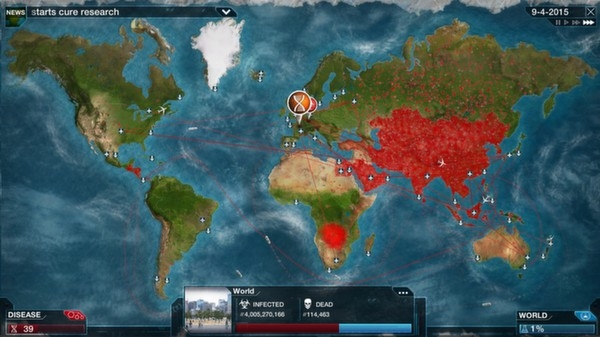 Ndemic Creations have released the infectious strategy game Plague Inc: Evolved on Steam Early Access and players all over the world are happily designing their own killer pathogens!

The game has significantly exceeded expectations, reaching #6 on Steam’s overall top sellers list in just a few hours and staying there. James Vaughan, the creator of Plague Inc: Evolved says that “this is just the beginning” and adds that “personally, I can’t wait to see how people find the upcoming multiplayer and world builder”

The game launched on Thursday 20th February, alongside a brand new cinematic/gameplay trailer voiced by Hal Robins (known for being the voice of Half-Life 2’s Dr. Kleiner).

The Early Access version of the game so far includes 7 main disease types and 3 cheat modes across 4 difficulty modes (including the brand new Mega-Brutal mode). An update is planned this week which will add in the mind-controlling Neurax Worm.

In the coming weeks, Ndemic Creations will be releasing regular (free) updates which will add in cooperative and competitive multiplayer, zombie-making Necroa Virus, Speed Runs, Scenarios and the Custom Scenario Creator along with lots of other brand new features.